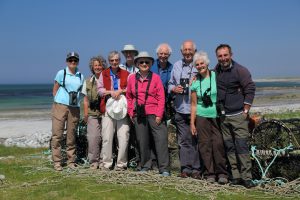 A Short-eared Owl, hunting outside the dining room over breakfast, is a good start to any birding trip, and by 9.20am we are watching two pairs of Red-necked Phalaropes chasing each other amorously along the edges of nearby Loch Mor on Benbecula. Also here are displaying Dunlin and Snipe, plus Redshank, Lapwing, Oystercatcher, Greylag, Shelduck, Shoveler, Wigeon, Teal, Red-breasted Merganser, and a couple of stunning male Ruff in resplendent breeding plumage, with Skylarks singing everywhere. Next stop is ‘Stinky Bay’, on the Benbecula coast, with plenty of Dunlin, Sanderling and a couple of Turnstones, all in bright breeding plumage, and also numerous Eiders, but no sign of the recent Iceland Gull. We also draw a blank with the Ring-necked Duck, which now seems to have vacated Loch an Os on South Uist, although a Whooper Swan is still present here. Exploring the gentle Machair coast of South Uist, we find plenty more Dunlin and Sanderling on the beaches, plus a Great Northern Diver in full breeding plumage offshore, loads of ‘wild’ Rock Doves in the sandy fields, and eventually, after some tracking along the coast, a snowy-white second summer Iceland Gull from Greenland, napping on a rock, and clearly showing the projecting white-tipped primaries.

This afternoon, the rugged east coast of South Uist, at Loch Aineort produces a young Red Deer stag, sprouting a new set of velvet-covered antlers, and plenty of Common Seals hauled out on weed-strewn rocks, plus Heron, Red-throated Diver and Black Guillemot, but no Otters or eagles. Over dinner we eagerly await the reappearance of the Short-eared Owl, which the waitress says normally shows up around 8pm, but it doesn’t appear until 8.20, just in time to be blocked out by a passing van load of birders, which pulls up right in front of our windows, just like that classic train spotter’s clip of the Flying Scotsman, overtaken on the inside lane by a Virgin train at the critical moment of passing by! You just couldn’t make it up!

It’s 31st May, and as dry as ever, unlike the heavy rain down south, and after a cloudy start, it’s soon back to full sunshine again. Driving across North Uist, we make an emergency stop for another Short-eared Owl, and on the approach to the Balranald RSPB reserve, we stop for a pair of Whoopers, grazing right next to the road, with an invisible Corncrake calling nearby. A Corn Bunting shows well while singing from a fence post, two Little Terns flash by and then a hen Hen Harrier puts on a lovely show while hunting at low level over the flower-rich Machair. Further along the trail around the headland here, hundreds of Sanderling, Dunlin and Turnstones, all in smart breeding plumage, forage amongst the seaweed along the beach, along with a mainly white second summer Glaucous Gull. Suddenly pandemonium breaks out amongst the local Oystercatchers, Lapwings and Arctic Terns, as they club together to see off a passing Great Skua. During a picnic lunch on this westernmost point of North Uist, Gannets, Fulmar and Kittiwake all sail by not far out to sea, and on the way back, two lucky members of the group actually see a very skulking Corncrake! We return across North Uist, via a scenic route across the central moorland, in time to see another female Hen Harrier, flushing a Red Grouse from its low level flight path. 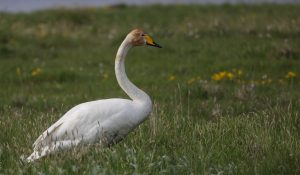 It’s 1st June, but none of the Rabbits are white. At the north end of South Uist, we soon see a male Hen Harrier flying low across the Machair, and then a lone Bar-tailed Godwit, which is new for the trip, followed by Reed Bunting and Sedge Warbler, both singing in a small reedbed. Someone mentions wanting to see a Twite and then one ironically perches on a wire fence just in front of us, revealing a lovely pink rump! Following a local tip off for Corncrakes, which are strangely quiet this morning, we reach the ‘Dead End’ cemetery at Ard a Mhachair, home to a couple of dozen Ravens. We also find another Glaucous Gull here, and this time it’s a ginger-dusted one year old bird, snoozing on the weedy rocks. Next new bird is a Spotted Flycatcher, posing on a fence along the road to Sanndabhaig, followed by Hooded Crow. Alongside nearby Loch Druidibeg, a male Hen Harrier patrols the adjacent moorland and we nail a Cuckoo in the scope, puffing out his throat each time he calls. As the B890 winds through dramatic moorland scenery en route to Loch Sgioport, we pass two female Hen Harriers, perching between short bursts of low level flight and spot a Red-throated Diver on the tranquil sea loch. On the return drive, a vociferous Common Sandpiper is new for the trip.

Despite the heavy showers down south, we are still enjoying warm dry weather, ideal for hunting Short-eared Owls, and by 9.30am our third of the day pounces on a large vole barely twenty five yards away from the vehicle, giving us a long stare before carrying the hapless vole away to its hungry brood. On the way to North Uist, an exploration of Grimsay produces a sequence of nice sightings, beginning with two Twite foraging on the ground alongside the vehicle, while a female Hen Harrier floats by. Next, we find two Cuckoos chasing each other along nearby telephone wires, and in the scope the female shows a rusty chest, and is soon joined by a smart male Wheatear, singing on the same wire. Heading north along the coast of North Uist on the A865, a Corncrake calling from a roadside hay meadow is eventually seen by all, over a series of pop up appearances. Heading across the moorland heart of North Uist on the ‘Committee Road’ a high-flying female Hen Harrier attracts us to a more distant ‘skydancing’ male. At the north end of the road, I have a hunch and suggest we wait for five minutes and see what happens. Almost immediately, a Short-eared Owl appears carrying a vole and rests on the ground while we all enjoy a view in the scope, until a female Hen Harrier mobs the owl as if trying to steal its prey, and the two raptors spiral upwards and away across the moorland! Back on the A865, this time along the north coast of North Uist, we track a Golden Eagle gliding east across the slopes of Maari, while mobbed by a ‘tiny’ Raven! Another male Hen Harrier is our next sighting, followed by a Red-throated Diver on the sea near Lochmaddy, with yet another Short-eared Owl and a pair of Golden Plovers on the roadside moorland. In this part of North Uist there is more freshwater than land and we eventually find today’s target bird here; a pair of rare Black-throated Divers. It’s cool and cloudy this morning, so a good time to go home, but with half a day to spare before the flight, we head north to Baleshare, joined to the west coast of North Uist by a causeway, hoping to find a Garganey reported here yesterday. There is no sign of the Garganey, but we do find another Whooper Swan and two Whimbrel, which are new for the trip. Further east, on the B894 to Loch Euphort, we also find six Red Deer stags, sprouting new sets of antlers, a singing Willow Warbler (also new) two more Cuckoos and another male Hen Harrier. With just over an hour to go until check in time at the airport, there are mutterings of wanting to see a White-tailed Eagle, with the promise of “a bonus!” Incredibly, a blonde-headed adult appears within minutes of the suggested wish, flying slowly across our path, giving everyone a superb view! What an amazing last bird of the trip, and a fantastic finale!