We begin at a very windy Chew Valley Lake, whipped up by the tail end of Storm Dennis, where a Raven deftly ‘sailing’ on the high wind is an unexpected starting point, while the relative shelter of the trees by the Stratford Hide produces the first of several vociferous Cetti’s Warblers, along with Long-tailed Tits, Redwing and a Great Spotted Woodpecker. Meanwhile, from the hide we add a patrolling Marsh Harrier and the first of many Great White Egrets to the list. Wading on to the nearby Moreton Hide, we enjoy close views of Pochards, Goldeneyes and several duck and drake Scaup amongst the many Tufted Ducks, bringing the afternoon’s total to forty species.

At last the wind has subsided this morning and the sky is blue, producing perfect light for admiring the thousands of waterfowl gathered at close range at the flooded Greylake reserve. The teeming multitude consists of big flocks of Lapwing, Golden Plover, and whistling Wigeon, alongside shed loads of Teal and Shoveler and a few Gadwall, with several Snipe showing well right in front of the hide amid the nearest Teal and Wigeon. A single Black-tailed Godwit calls overhead, and with so much on the menu, a Peregrine dashes by. On the reedbed loop a Cetti’s Warbler briefly sits out in the open, followed by a male Stonechat, while a Water Rail makes a very brief appearance amongst the reeds. Back in the car park there is no sign of yesterday’s Yellow-browed Warbler, but a very obliging Goldcrest is a nice replacement. 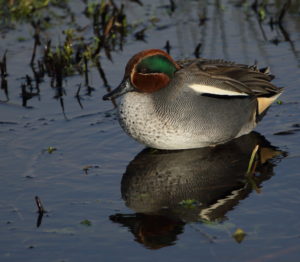 Moving on via a flooded road, to the brim full River Parrett, past a ‘paddyfield’ packed with Little Egrets, Shelduck is the only new bird. After a pub lunch in the nearby King Alfred we visit the Catcott Lows reserve, which is surprisingly quiet, with only Little Grebe and Sparrowhawk as new birds for the list. By late afternoon, flocks of Starlings gather in the fields for a final feed before heading off to roost in an inaccessible part of the Avalon Marshes, although the heavy rain is not conducive to a murmuration.

We begin the new day at nearby Westhay Moor, with nice views of a pair of Marsh Harriers, apparently prospecting for a nest site amongst the reeds. The reeds also produce a pair of Bearded Tits foraging low down at very close range, but still tricky for some to see, whereas a pair of Great Crested Grebes put on a fabulous show for all to enjoy with their ‘weed dancing’ courtship display. Moving on to the adjacent farmland, a male Sparrowhawk dashes across the meadows, and we find several Fieldfares amongst a large feeding flock of Starlings, with Green Woodpeckers calling in stereo, before one or two repeatedly fly by. Sadly no one else saw ‘my’ Otter before it dived without a trace.

After lunch in the Ring O’ Bells we head for the nearby Ham Wall reserve and despite the wintry weather, Bitterns are revving up for spring with occasional booms from their reedbed hideouts, and eventually one briefly breaks cover as it flaps across an open channel before disappearing back into the reeds. Meanwhile a Kingfisher is far more obliging by perching in the edge of the reeds, and in the scope, the reddish lower mandible shows it’s a female. By late afternoon large flocks of Starlings start to race overhead with an audible whoosh from so many wingbeats, as they head for a communal roost at Shapwick Heath. The converging Starlings gradually coalesce into a spectacular and mesmerising murmuration composed of hundreds of thousands of birds! As the ‘mega flock’ twists and turns like a disorganised Tornado it rapidly darkens and then lightens, like the skin of an Octopus! Meanwhile, Cetti’s Warblers and Water Rails continue to call from the reeds as Bitterns repeatedly boom; an amazing experience.

We spend our last day of the trip at Slimbridge, where the saturated Dumbles are jam-packed with thousands of birds, including Wigeon, Lapwing, Golden Plover, Curlew, Black-tailed Godwit and Dunlin, all exploding into separate flocks each time they are spooked by the breezy weather. Among the throng we also spot smaller numbers of Pintail, Teal, Shoveler, Redshank, Ruff and Oystercatcher, as well as the last remaining Bewick’s Swan, busily washing and preening, before flying over our heads and off into the blue, while the others have already begun their long journey back to the Tundra of Arctic Russia. Meanwhile Avocets have already arrived for a new breeding season, and amongst the resident Barnacle Geese we find a handsome Bar-headed Goose. Out on the estuary, a perched Peregrine launches itself, to be joined by a second bird in tight formation, providing a dramatic air show and after an action-packed day, two pairs of Cranes show well in front of the Zeiss Hide and then fly right past the hide calling as they go, winning the ‘bird of the trip’ accolade out of 81 entries.