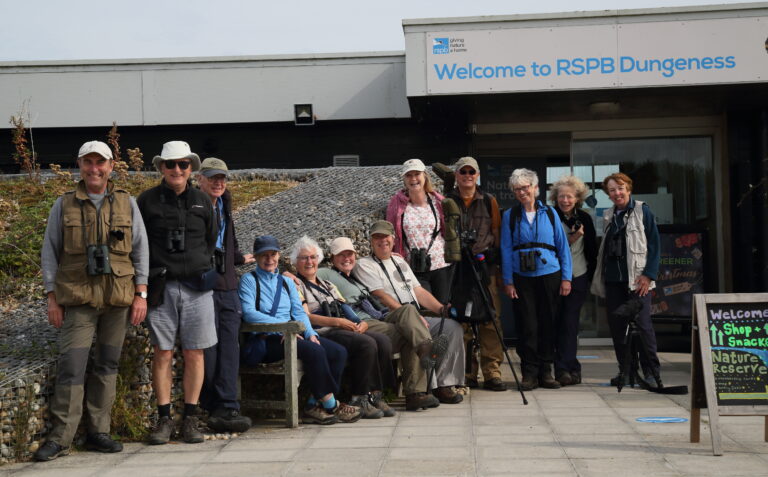 On the way down to the south coast we stop off at Rainham Marshes where the first sighting is a Cattle Egret, amongst a group of Little Egrets, followed by Great White Egret and exciting views of a hunting Hobby darting after dragonflies on the wing. Along the sea wall we also enjoy good views of numerous Avocets and Black-tailed Godwits, feeding along the muddy shore of the Thames estuary, but no sign of yesterday’s White Stork.
Today we begin at the RSPB Dungeness reserve where the first bird, not far from the car park, is a Glossy Ibis flying right past us! What a fabulous start. Common Sandpiper is next, followed by close views of a Ruff, plenty of lovely Golden Plovers and distant head shots of a tight knit group of three Mediterranean Gulls, peeping over the brow of a shingle island (more on that story later). The next viewpoint produces a Black-necked Grebe, already in winter plumage, and diving repeatedly. Further round the circuit, we spot a female Marsh Harrier, a busy flock of Yellow Wagtails around a group of cattle, a Sedge Warbler quietly picking insects along the edge of a ditch right under our noses and a Kingfisher in the scope, as well as at least five species of butterfly; Small Tortoiseshell, Small Heath, Small Copper, Red Admiral and Clouded Yellow, so not a bad morning’s ‘work’. 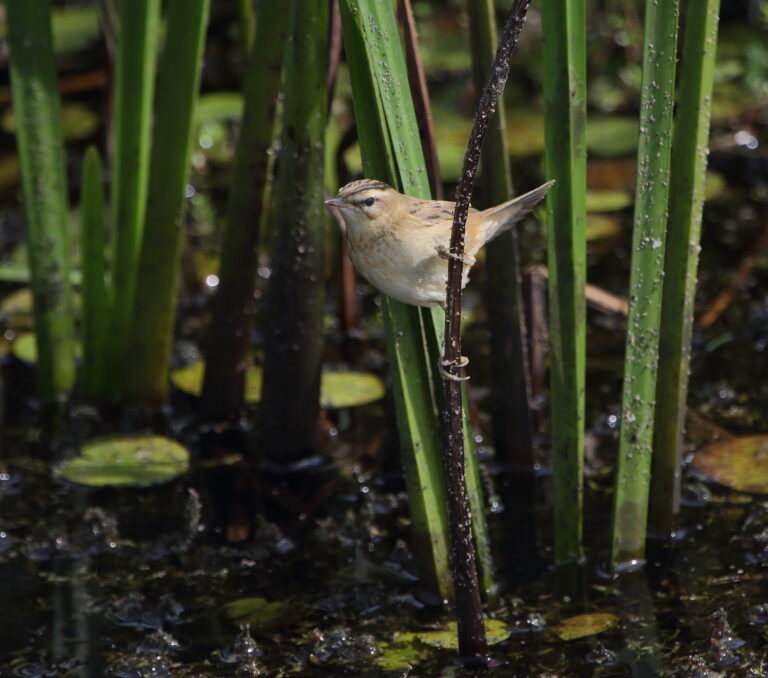 After lunch, another look at Burrowes Pit beside the Visitor Centre produces three Pintail, while the three Mediterranean Gulls have not moved an inch, as a better view reveals that they are actually decoys! Durrrhh. Moving on to the lighthouse by the power station, a brief seawatch produces a Gannet and plenty of vocal Sandwich Terns. Next, we head back to the RSPB car park where ‘squeaking John’ attracts an inquisitive Fox to within ten yards of us! Meanwhile, there is no sign of another White Stork, seen here yesterday. 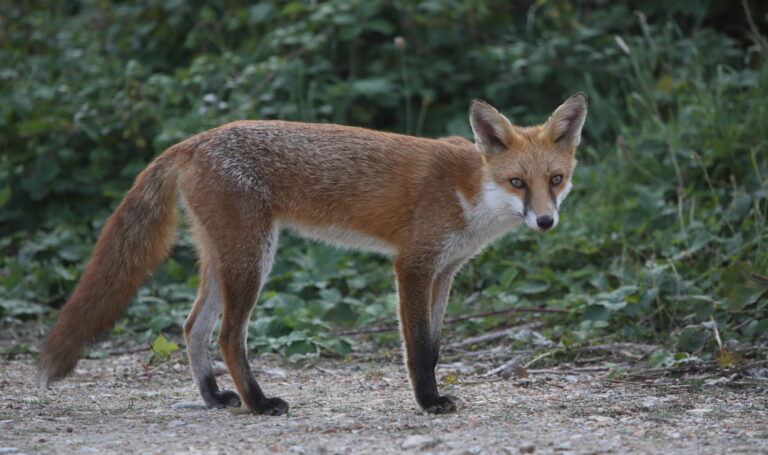 Today we head west to the Pulborough Brooks RSPB reserve, where the gloomy grey weather shrouds the normally picturesque view of the South Downs, although one of the hides produces plum views of a juvenile Whinchat posing on various low perches, along with a more distant male Stonechat, and a passing ‘croaky’ Raven. The next hide produces another Whinchat, followed by a couple of Greenshank, a Common Sandpiper and a Little Ringed Plover from the Hanger viewpoint, but no sign of yesterday’s vagrant Pectoral Sandpiper, probably thanks to the tractor mowing the adjacent margins! After lunch here, we visit the nearby Knepp Estate where an ambitious and far sighted rewilding project is providing a free range home for wild pigs, cattle, ponies, Red and Fallow Deer and an exciting variety of birds including White Storks, which are now breeding here again in Britain for the first time in centuries! A little way into the estate, John spots one of these storks perched in one of the estate’s many impressive Oak trees. It’s a distant view but a promising start nevertheless. However within half an hour along our stroll we enjoy an intimate view of GB67 and GB86 standing proud of their bulky nest, while preening and looking very relaxed barely fifty yards from the public footpath! While we admire the handsome couple, a Great Spotted Woodpecker joins them on a dead branch in the same tree. Green Woodpecker, a Sparrowhawk being mobbed by a posse of Rooks, a Jay sitting in a nearby dead tree and a dozen Exmoor Ponies are other nice sightings here, but the storks steal the show today. 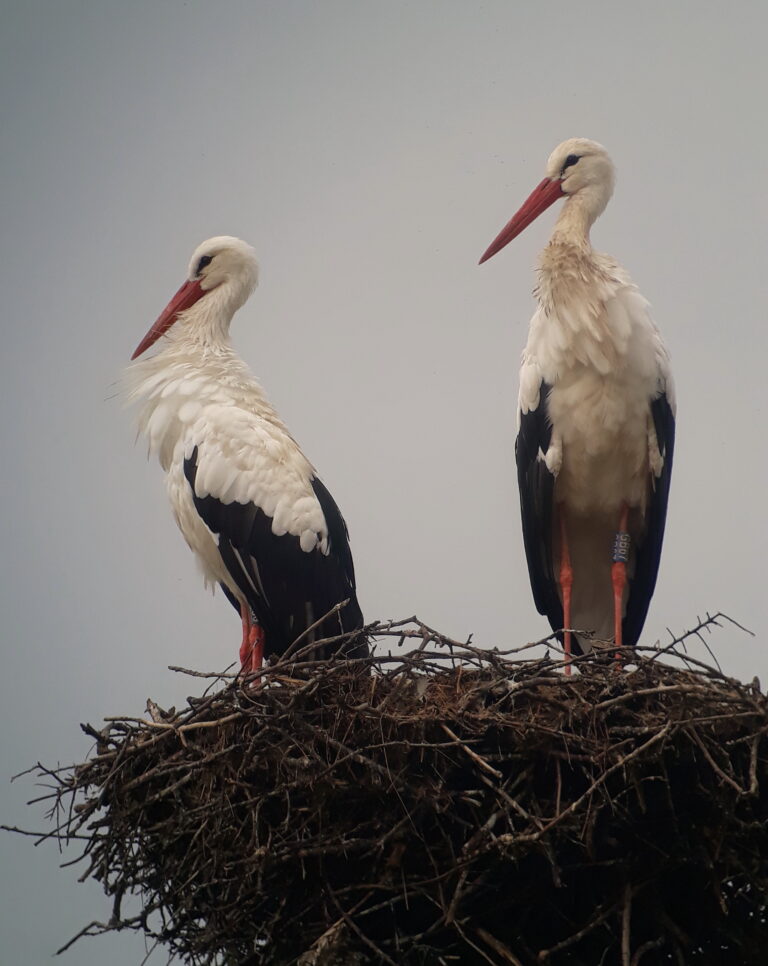 Nearby Rye Harbour is today’s choice of venue, where we begin with lovely views of a couple of Knot, a Grey Plover and a Wheatear, followed by sightings of three Common Seals in the river mouth, with well camouflaged Turnstones, Dunlin and Ringed Plovers on the nearby shingle shore and a showy Sanderling on the opposite sandy shore, while a scan of the many Sandwich Terns resting on the beach reveals a smaller, greyer Arctic Tern. Moving inland, the freshwater Castle Water teems with Shoveler and Teal and amongst all the wildfowl we find a few Black-tailed Godwits and Green Sandpipers as well as a Pintail and a lovely Black-necked Grebe with brilliant red eyes. On the way back to the lodge, we pay a visit to the ancient church in the picturesque village of Winchelsea, and locate the gravestone of legendary comedian Terence Alan (Spike) Milligan. 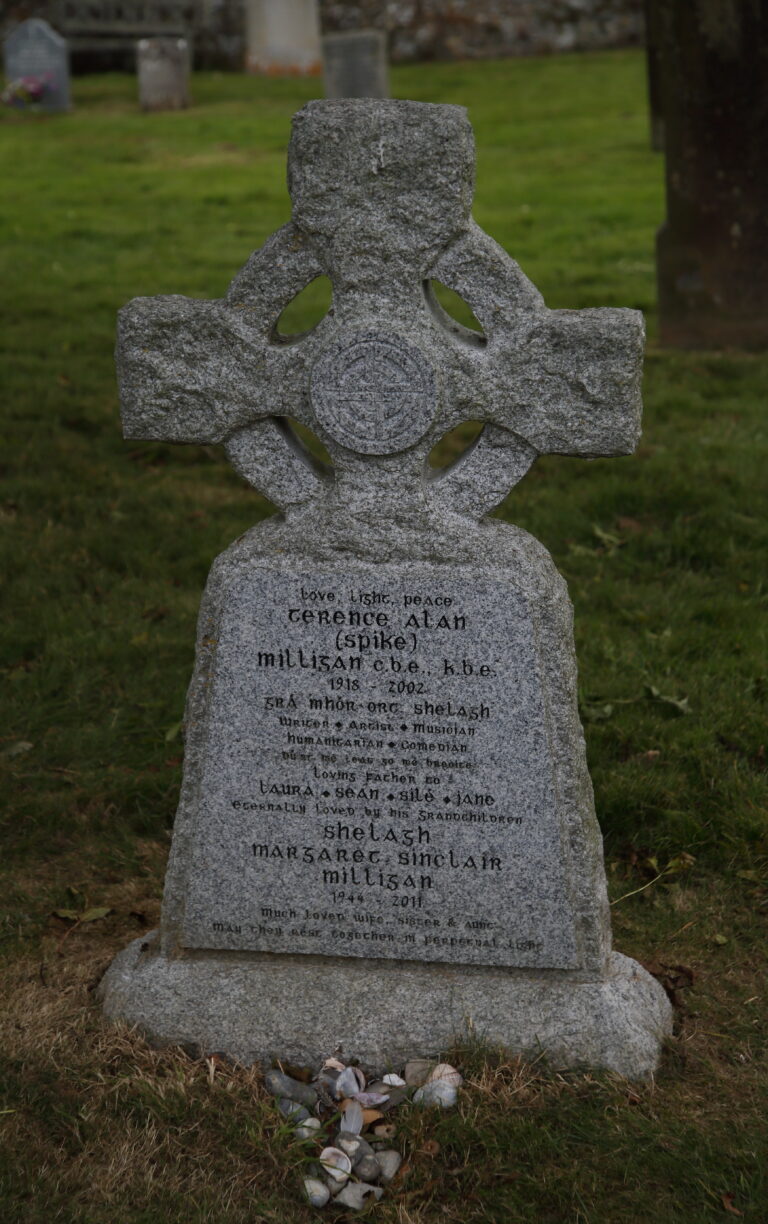 On the way home, we call in at the Cliffe Pools RSPB reserve, where hundreds of waterbirds include good numbers of Shoveler, Teal, Pintail, Avocet and Black-tailed Godwit, and amongst the crowd we find a few Greenshank and Snipe, plus a Ruff and a Marsh Harrier sitting at the water’s edge as if perusing the menu. We also find several vocal Marsh Frogs, a group of Grey Seals hauled out on the opposite shore of the Thames estuary and a couple of Whinchat, showing well on a fence alongside the trail, while a Cetti’s Warbler brings the total number of birds seen on the trip to a creditable 97 species, including ‘stars’, in order of appearance, like Cattle Egret, Hobby, Glossy Ibis, Black-necked Grebe, Whinchat and of course the wonderful White Storks.