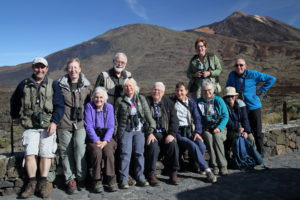 We begin on Tenerife with Yellow-legged Gulls at the port of Los Cristianos, while waiting for the ferry across to La Gomera. Soon after leaving port we spot several Cory’s Shearwaters, and on the approach to La Gomera we sail right past a large pod of lively Atlantic Spotted Dolphins, cavorting in their dozens.

The island of La Gomera has a split ‘personality’, with an arid exterior sparsely scattered with hardy xerophytes such as Prickly Pears, and a soft lush green ‘heart’ cloaked in an evergreen forest of Tree Heather and Laurel, festooned with wisps of epiphytic moss, reminiscent of Andean cloud forest. This is the home of the rare endemic Laurel and Bolle’s Pigeons, our main targets today. Staking out the first mirador, overlooking the vertiginous forested slopes, we soon see Canary Island Chiffchaff, which should really be a Chiffchiff, judging by its song. Several Painted Ladies soon follow, along with a Canary Brimstone, and a fleeting flyby by two bar-tailed Bolle’s Pigeons disappearing into the treetops. Moving on to the next mirador, the forest is eerily quiet, so we head to Laguna Grande for lunch in the mist along with Blackbird, Tenerife Kinglet and the local tintillon race of Chaffinch. In need of more pigeons we return to the spectacular and aptly named Mirador de las Rocas, where rugged crags tower above the forested slopes. Several Rock Doves flap around the crags, and eventually a pair of white-tailed Laurel Pigeons break cover from the forest canopy and then disappear back into it. Luckily we pinpoint them in the scope, while perched, showing a dark ‘plummy’ breast. 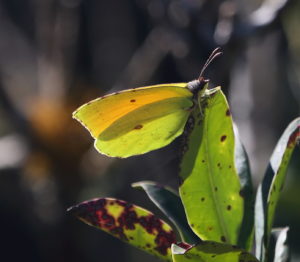 On the evening crossing back to Tenerife, with the volcanic cone of Mount Teide breaking through the clouds, several Cory’s Shearwaters cruise alongside the ferry, and the Spotted Dolphins are spotted again.

The new day dawns crisp and bright in Vilaflor, Spain’s highest village, with a cloudless blue sky as we drive up through the island’s ‘crown’ of Pine woods in search of our next endemic, the rare Blue Chaffinch, which only lives in these high altitude Canarian Pines. An unfamiliar ‘tweet’ attracts our attention and we soon have the chaffinch foraging on the ground at very close range, while other close sightings here include the vivid African Blue Tit and a pair of confiding Great Spotted Woodpeckers. 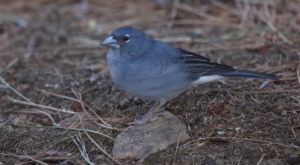 Emerging from the ‘crown’ of Pines, we enter an unearthly landscape of crumpled black lava, which poured down the slopes of Mount Teide in 1798. Heading northwest to the Teno Peninsula, a seriously convoluted narrow road winds its way precariously through another spectacular landscape, with sheer cliffs in every direction; ideal terrain for Ravens, Buzzards and numerous Kestrels. After lunch in a local restaurant, with plenty of Atlantic Canaries dining on ripe figs, an even steeper and more sinuous narrow road leads up the green north slope of Tenerife to Erjos, where an afternoon stroll produces even more Kestrels and Canaries, as well as Canary Island Chiffchaff, Sardinian Warbler and a Robin with a call reminiscent of our Great Tit back home. 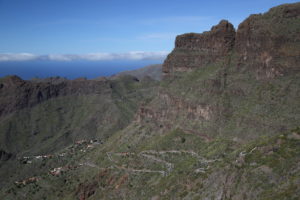 It’s another glorious morning up in Vilaflor, as we set off on a stunning scenic drive up through the Pines and across the barren lower slopes of Mount Teide, as if on an island surrounded by a sea of cloud down below. Tenerife’s climate is so topographically varied that the sun-soaked semi-desert biome on the south facing slope of the volcano is soon replaced by a soggy misty Pine forest on the downward approach to the Tenerife North airport. 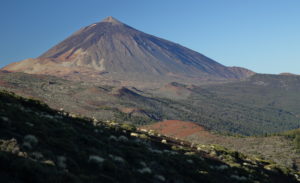 Flying on to Fuerteventura, we install at the quaintly rustic Hotel Rural Mahoh in Villaverde, with dozens of confiding Spanish Sparrows in the garden, and head out to search the nearby stony plains for this desert island’s specialities. A couple of Southern Grey Shrikes soon show well, while a thorough scan produces just one Lesser Short-toed Lark. As the evening sunshine fades we eventually find one of our main targets, a Houbara Bustard with a long grey neck and a black collar. Not a bad start on ‘our new island’.

Today we head south to the Embalse de Los Molinos, a partially dried out reservoir next to a goat farm. Straight after leaving the main road, a couple of Southern Grey Shrikes show very well, followed by the first of many Berthelot’s Pipits, while a Spectacled Warbler is next on the list. Parking by the goat farm, around twenty Ruddy Shelduck seems like a good count, but by the end of the morning this has grown into flocks of one hundred plus birds! A flight of four Black-bellied Sandgrouse lands on the stony ground, soon to be joined by many more, and as we scan the area for these usually wary and elusive birds, we soon realize that there are actually dozens, quietly feeding amongst the stones. Next we spot three Houbara Bustards, often showing in the same scope view as some of the sandgrouse! How often does that happen? 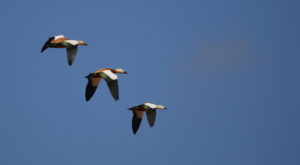 After almost an hour by the farm, with so much to see, new birds include Hoopoe, Egyptian Vulture, several smart rosy Trumpeter Finches and a hunting Barbary Falcon, along with our first of many Barbary Ground Squirrels. Meanwhile, a vestige of water in the base of the barranco running past the farm produces two Little Ringed Plovers, and a very unexpected Snipe, given that this is a desert island off the coast of north Africa. Further along the stony track, the shrunken reservoir adds around twenty Little Egrets, thirty Herons and thirty five or so Black-winged Stilts, along with a Spoonbill, a Common Sandpiper, a couple of Greenshank, four Teal and several Coots.

After a picnic lunch we head south to the Barranco de la Torre. Our target here is the Fuerteventura Stonechat, which lives nowhere else, and is therefore one of the world’s rarest birds. After a brief wait we have a female in the scope, posing on her favourite perch. Moving on, the nearby Salinas del Carmen adds a Whimbrel to the slowly growing list. By late afternoon it’s time to head north back to the hotel, with a stop en route at the Barranco de Rio Cabras, where a vagrant Dwarf Bittern from equatorial Africa became a celebrity here in December 2017! Looking down into the canyon, Pam spots a “bright blue bird”. Yes, amazingly, it’s the long staying bittern, still showing well almost two years after first being sighted here! In case this was not enough, a pair of the endemic stonechats pose just below us, while a couple of pink and blue Laughing Doves fly by. With all the Canarian endemics and most of the Fuerteventura specialities now in the bag, today has to be the most fruitful day on Fuerteventura ever! 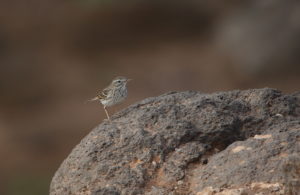 Today we head north via the plains near La Oliva, finding a couple of dozen Barbary Partridges not far from the village, and then another Spectacled Warbler and more handsome pink and blue Laughing Doves. Out on the stony plain we find a Houbara Bustard, and then a second one nearer the track. A little further along the track we scope a Peregrine sitting on a large stone, but no coursers. 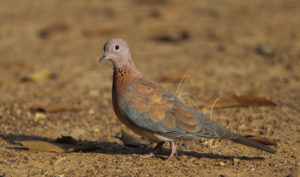 After morning coffee in El Cotillo we head north to the lighthouse on the rocky Punta de Tostón for a picnic looking out to sea. Along the rocky shore we find several smart Kentish Plovers hunkered down among lots of Ringed Plovers, as well as Turnstones, Common Sandpiper, Whimbrel, Dunlin and Sanderling.

Still in need of Cream-coloured Courser, we try a track through the stony desert south of El Cotillo, finding another Southern Grey Shrike and three Stone Curlews, with large yellow starring eyes, but still no coursers.

It’s our last full day on Fuerteventura, and we head south to the Jandía Natural Park near La Pared, hoping to find the elusive courser. En route to La Pared we add a lone Cattle Egret, standing right beside the road, to the list. Once in situ near La Pared, I jokingly brief the group on what to look out for on ‘Operation Courser’. Barely five minutes’ walk from the vehicle, John spots a movement, and there they are, a group of six coursers, running around on long bleached white legs with an upright stance, showing all the detail of their black, white and blue-grey stripy head patterns. With this handsome bird ‘in the bag’ we had now cleaned up on all the Canarian endemics and specialities! Wow, how lucky is that? As well as the coursers we spot several Black-bellied Sandgrouse on the ground and in flight here, before heading north on a scenic drive toward Pájara, with a stop for a picnic at the Sisacumbre mirador, where a male Fuerteventura Stonechat shows really well, along with a pair of ‘bold as brass’ Ravens, tame enough to snatch food from the hand given half a chance! 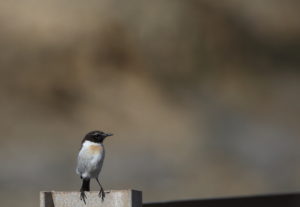 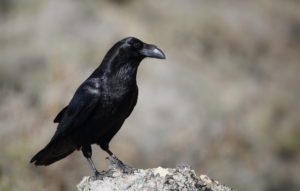 This afternoon, a walk along the dry river bed at Vega de Rio Palmas produces African Blue Tit high in a palm tree, as well as Laughing Dove, Spectacled Warbler and Southern Grey Shrike. Ironically, another shrike is sitting on the hotel sign on our return, while dozens of noisy Spanish Sparrows are ‘settling down’ for the night in a couple of cactus trees in the hotel garden. 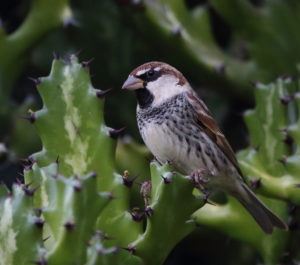 On our way to the airport, it would be rude not to revisit our new friend ‘Dwarfie the Bittern’, showing really well again in the scope, with its lead blue back and black-striped white neck, along with the male chat, Little Ringed Plover, Black-winged Stilt, Green Sandpiper and several Little Egrets and Spoonbills. Just as we are about to leave for the airport, a White Stork drops down from the blue sky bringing the bird list to 59 species, including plenty of quality sightings. 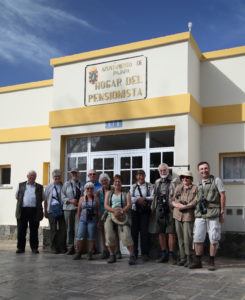