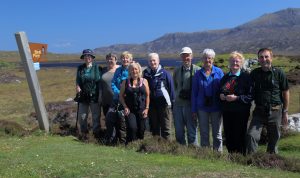 So, here we are in the Western Isles, after previous visits in 1998, when New Horizons began, and again in 2008, and still with three of the ‘survivors’ on board from the very first New Horizons trip! On the drive south from the airport on Benbecula to the hotel on South Uist, we spot three Short-eared Owls hunting over the rough grassland!

With a list of recent sightings on these remote islands, we begin our first day at Loch an Os, at the top end of South Uist, where David soon finds our target North American drake Ring-necked Duck, diving alongside a pair of local ‘Tufties’. Moving on to Benbecula, there is no sign of a recently reported Garganey on Loch Fada, but nearby Loch Mor produces a bird fest, beginning with a couple of stunning male Ruff in resplendent breeding plumage. One has a rufous ruff, while the other’s is ginger, and both have black and gold plumage with orange bills and bare orange faces. Also present are Greylag, Shelduck, Shoveler, Lapwing, Redshank, Snipe, Oystercatcher, a pair of Red-breasted Mergansers, a Barnacle Goose and a couple of female Red-necked Phalaropes, daintily paddling amongst the emergent grasses of this shallow loch. The nearby coast is alive with Eiders, as well as Dunlin, Sanderling, and a Great Northern Diver, all in breeding plumage. A sandy field is choc-a-bloc with Ringed Plovers, alongside a few ‘wild’ Rock Doves, but the Turtle Dove seems to have moved on. On the approach to the Balranald RSPB reserve on North Uist, we hear our first Corncrake, and spot a couple of Whoopers getting ready for their flight back to Iceland, and while having a picnic lunch beside the visitor centre, a lucky few see a Corncrake dash right past them! A Corn Bunting singing here is also new for the trip, and on the way back across North Uist, another Short-eared Owl shows briefly before dropping into the Heather. After the evening roll call, the Ruff are unanimously nominated as Birds of the Day.

Last night’s gale has subsided this morning, and it’s a beautiful warm sunny day, with Skylarks singing everywhere. Just ten minutes from the hotel, we have another Short-eared Owl, this time flying high with a prey item in its talons. At the south end of ‘our’ island, the ummistakable “crex crex” of first one, and eventually three Corncrakes, emanates tantalizingly from the short flower-filled Machair turf, and we are soon all enjoying fantastic views of one of these notoriously secretive birds calling repeatedly in the scope, in that characteristic pose with an outstretched neck as it throws its head back to project the rasping call from a wide open beak! Meanwhile, we also find three Whimbrel, foraging on nearby bare sandy soil, and spot a female Hen Harrier, spiraling on the thermals.

This afternoon, the thermometer reaches 23.5°C, and as we head north along the A865, we veer off abruptly for an overflying Osprey, being followed by an angry mob of Oystercatchers and Lapwings. Back on the main road, we follow the B890, alongside Loch Druidibeg, spotting an amorous pair of Common Sandpipers along the rocky shore. Heading east, through increasingly dramatic mountain scenery, there are no signs of any eagles, but we do find a smart male Wheatear, a family of newly fledged Stonechats, a pair of Ravens, a very obliging Wren and a chuckling female Cuckoo, flying back and forth while being chased by several Meadow Pipits.

The tee shirt weather continues this morning, as we drive north back to the Balranald reserve, where a Spotted Flycatcher is new for the trip list, and the Corn Bunting is still singing on the same wire, but this time joined by a Twite and a Linnet! Along the trail around the headland here, a Little Tern flies by, another Great Northern Diver fishes offshore, with hundreds of Sanderling, alongside a few Dunlin and Turnstone, foraging amongst the seaweed on the beach. Looking up, the ’flying barn door’ outline of an immature White-tailed Eagle circles directly overhead before drifting slowly out to sea; a strong candidate for today’s star bird. Passing a lively colony of Arctic Terns, and an occasional Rock Pipit, we sit down for a picnic at the end of the headland, looking out towards a Grey Seal and the distant outline of Saint Kilda, with Fulmars and Gannets cruising by. Back at the visitor centre, the Corncrake is calling again, attracting a small ‘crowd’. We eventually pinpoint the bird’s outstretched neck projecting from the hay meadow, and on the return drive south, we spot two more Short-eared Owls. 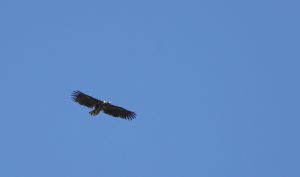 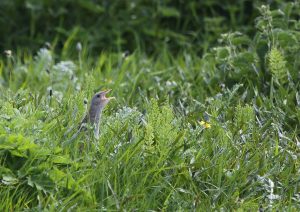 While millions back home suffer typical bank holiday weather, with torrential rain, causing flash floods, we happy few enjoy basking yet again in almost 18 hours of brilliant sunshine, making this the warmest day in Scotland so far this year! Exploring the gentle Machair coast of South Uist, sightings include more Rock Doves, a gathering of Ravens, a passing pale phase Arctic Skua, and a Twite delicately feeding on dandelion seeds at close range. A stroll along the scenic Rubha Ardvule headland produces more Sanderlings and a chalky white second year Iceland Gull all the way from Greenland! After lunch here, we head for the rugged east coast around Loch Aineort, hoping for a Golden Eagle, and soon find two soaring, often in the same scope view, along the ridge of Ben Mhor, the highest point on South Uist at 2034 feet above sea level. The sea loch here is home to dozens of Common Seals, hauled out on the weed-covered rocks, while Red-throated Diver, Shag and Black Guillemot are all new bird sightings here, bringing the trip list to a total of 78 species, with the resplendent Ruff coming top of the list.