Home > The South Coast for the U3A 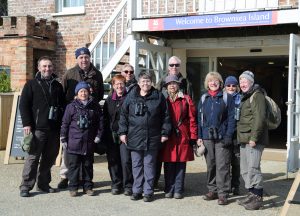 After lunch at Titchfield Haven, which is closed due to snow on the tracks, we continue east along the Hampshire coast to Farlington Marshes, where the many dark-bellied Brent Geese must feel at home in the Siberian weather conditions. Other water birds here for the ‘mild winter climate’ include Teal, Wigeon, Shoveller and numerous Pintail, plus Grey Plover, Black-tailed Godwit, Dunlin and Snipe. Meanwhile the Greenshanks en route north for the spring, and the resident Red-breasted Mergansers, Shelducks and Avocets, must be wondering what has hit them as the bitterly cold east wind sweeps across the desolate tundra-like landscape, with its light dusting of snow. Suddenly the congregation of wildfowl scatters as a Peregrine Falcon dashes across the frozen saltmarsh. Not a bad start for a travelling day.
With recent news of a Great Grey Shrike at nearby Morden Bog National Nature Reserve, we make this our first target of the day, which is much less windy than yesterday, with added sunshine. However our first sighting here is a pair of Dartford Warblers, showing really well on the tops of nearby Gorse bushes, and then a little further on we find ‘our’ Shrike posing for the cameras on top of a small Pine; result! Moving on, the trees immediately adjacent to the heath produce a pair of Stonechats and a very obliging Nuthatch, while three Buzzards glide over the woodlands. Next, we arrive at the Arne RSPB reserve in time for lunch, where Nuthatch, Firecrest and loads of Siskins are ‘car park birds’. After a picnic lunch here, the trails produce Green Woodpecker, great views of two Treecreepers and brilliant views of a very confiding male Black Redstart, in an unusual setting on farmland fence posts, winning ‘Bird of the Day’ accolade from many in the group. 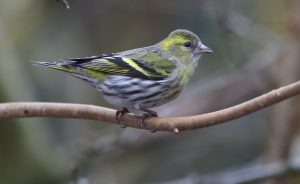 It’s 21st March and officially the first day of spring with a glorious blue sky and warm sunshine to match. With little or no wind to ruffle the surface of Poole Harbour, a Black-necked Grebe in full summer plumage is a good spot in the scope while waiting for the boat to ferry us across to Brownsea Island. The lagoon here is teeming with a staggering number and variety of birds, including hundreds of Avocets, and Black-tailed Godwits starting to acquire their rusty breeding plumage, and amongst the throng we also spot numerous Bar-tailed Godwits and Dunlin, as well as Redshanks, Greenshanks, Grey Plover, Turnstone and Knot, plus a dozen or so smart Mediterranean Gulls, a handful of newly arrived Sandwich Terns and just one Yellow-legged Gull. Alongside the lagoon, we also enjoy very close views of a couple of remarkably tame Red Squirrels, actually bounding along the boardwalk, right past us! After lunch in the sunshine, we catch the 1.45 boat back to ultra-posh Sandbanks, and just as we pull away, we spot an elusive Spoonbill actually spoon-feeding right in front of one of the hides we visited earlier! Back on the mainland, Keyhaven Marshes is also teeming with birds like Brent Geese, Shelduck, Pintail, Grey Plover, Curlew and Dunlin, while a Peregrine keeps a watchful eye, a couple of Marsh Harriers patrol the reedbeds and saltmarsh, a Common Seal sunbathes on a mudbank and a Raven floats by. A pair of Red-breasted Mergansers look superb in the late afternoon light earning my ‘Bird of the Day’ nomination, while other contenders sharing the ‘limelight’ include Greenshank, alongside Spotted Redshank at close range, out of a total of 68 different birds seen today! 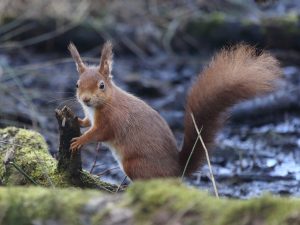 This morning, it’s time for ’Operation Goshawk’, at a viewpoint not far from Lyndhurst, with a magnificent vista across a landscape of unbroken forest in every direction. After a short stakeout, Lynne spots a Buzzard-sized raptor against the wooded backdrop, and we home in on the grey shape with rounded wing tips and a pale vent, and track it as it gradually gains height and spirals towards the brightest part of the sky; another great result. Strolling on from here, we bump into a female Crossbill, sitting and calling right on the top of an isolated Pine tree, and a little further on we eventually pinpoint a Woodlark singing its heart out high up in the sky, as if spring is really here at last. Back down to earth, our next sighting is a large ‘black’ Adder, coiled up in the Bracken, so close that it actually slithers away between John’s boots! After a picnic lunch in the forest, we set our sights on another local speciality, the rare and elusive Lesser Spotted Woodpecker, in prime ancient woodland habitat at the Rhinefield Arboretum. Strolling along the path, we suddenly and automatically stop in our tracks and retrace our steps on hearing the unmistakable call of a Lesser Spot, and amongst all the branches this almost mythical bird eventually shows well in the scope! After a very productive time in the forest, we head south to the coast at Pennington Marshes, where a newly arrived Chiffchaff is another sign of the long awaited spring, although the stiff breeze along the sea wall feels very wintry. As well as the usual ‘suspects’ other top sightings here include a handful of smart Golden Plovers, Raven, a newly arrived male Wheatear and four Spoonbills, ending a really productive day with several top quality bird sightings like Goshawk, Crossbill, Woodlark, Lesser Spotted Woodpecker and Spoonbill.
We begin our final morning with a ‘wild goose chase’ in response to reports of a lone Bewick’s Swan, and after scoping dozens of Mutes all across the extensive Ibsley Water Meadows, from several points, we eventually find the dainty little Bewick sitting and grazing among yet more Mutes. This is bird number 99 on our list, preceded here by Skylark and Red Kite and quickly followed by Egyptian Goose, bringing our list to 100! From here, it’s a very short drive to our last planned stop at Blashford Lakes, where more new birds on the largest lake include Pochard, Goldeneye, Goosander and two Little Gulls, while our last new sighting is a flock of at least twenty Bramblings right in front of the woodland hide, with several of the males showing well developed handsome black breeding heads; an appropriate finale to a really productive short late winter break, with an enviable list of top quality sightings. 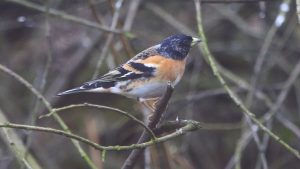