Home > The Camargue & much more 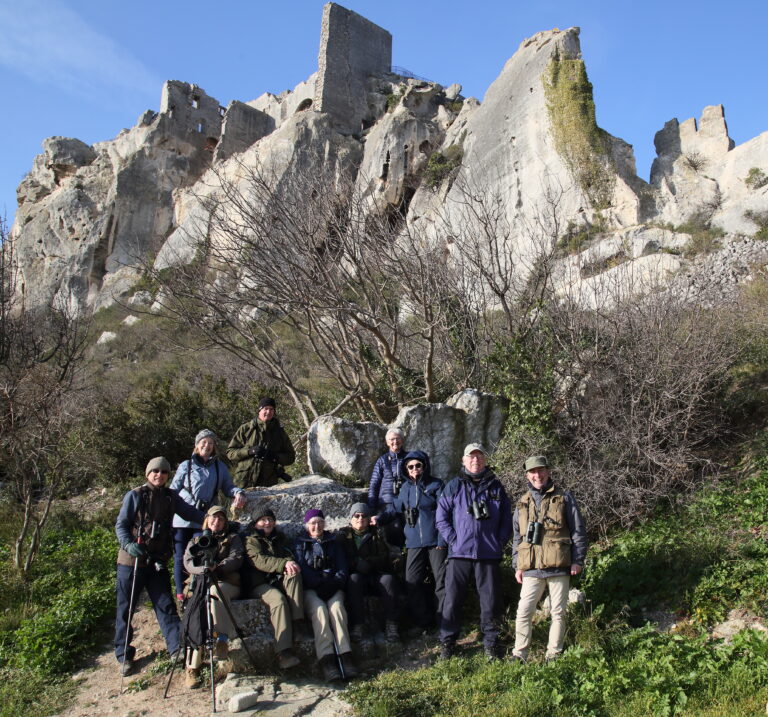 So here we are at last, in beautiful Provence on the third attempt, after two lost years thanks to the blessed virus, and now we just have a ferocious Mistral wind to deal with as we scan the wide stony plain of Les Coussouls de Crau, hoping for local specialities like Pin-tailed Sandgrouse and Little Bustard. Although we find no sign of these elusive birds we enjoy nice scope views of a Southern Grey Shrike and also find Stonechat, Rock and Corn Buntings and a few flighty Calandra Larks, while Cattle Egrets accompany the sheep in a nearby pasture.
Moving on to the Eyguières airfield, it’s an even greater struggle to scan thanks to the strengthening Mistral. Leaning against posts for support we find a flock of Golden Plovers, hunkered down and well camouflaged in the windswept dry yellow grass. Just before leaving, a final scan reveals a large raptor standing horizontally over the carcass of a Rabbit on long powerful looking legs with a long protruding tail, unlike a more stocky Buzzard. Further scrutiny reveals a heavier hooked bill, a pale vertically streaked front and a tell tale white patch on the mantle. Crikey, it’s the rare Bonelli’s Eagle! How often do you see such a scarce raptor actually on the ground? This makes all the hurdles to get here worthwhile after all! From here we move on to the lovely Villa Regalido in Fontvieille, with a male Black Redstart sitting on the garden gate as we arrive!
There’s another lovely blue sky this morning but the Mistral is still blowing ‘a hooley’ as we head a short way north to Les Baux-de-Provence in the scenic Alpilles hills where our primary target is the ‘sacred’ Wallcreeper. Arriving at 9am, Howard spots the almost mythical bird, high up on the cliff face, before we are ready for ‘action’, so no one else sees it, making this one of the best ‘private ticks’ ever! Despite a thorough search of the cliffs that encircle this imposing medieval settlement, there are no further signs of a Wallcreeper, but we do find Sardinian Warbler, Crested Tit, Black Redstart, wild type Rock Doves, with gleaming green and purple puffed up throats, and also enjoy plum scope views of male and female Blue Rock Thrushes. From the lee of the wind, provided by the towering cliffs, we emerge into a coll creating a wind tunnel so ferocious that we struggle to remain upright, while a certain member of the group is actually blown along, taking out others in her path like a flailing bowling ball felling skittles in a bowling alley! I think that must be the first time I have ever seen punters unable to stand upright and even blown off their feet! 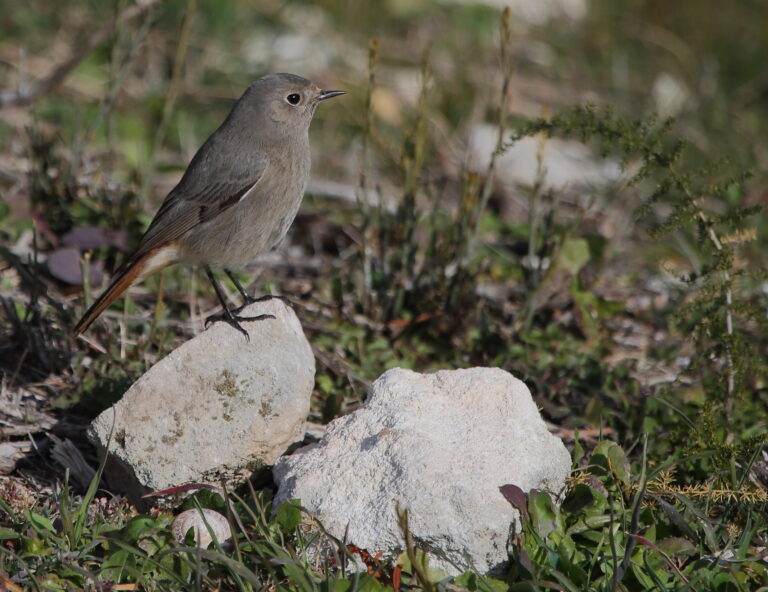 From here it’s a short drive north to La Caume where a walk through the pine woods produces great views of Crested Tit, more Black Redstarts and a stunning bright yellow-green male Citril Finch. By late afternoon, it’s time for an Eagle Owl stake out at the famous Hotel Mas d’Oulivié site, but ‘Le Grand-duc’ seems reluctant to come out in such cold windy weather. C’est la vie. 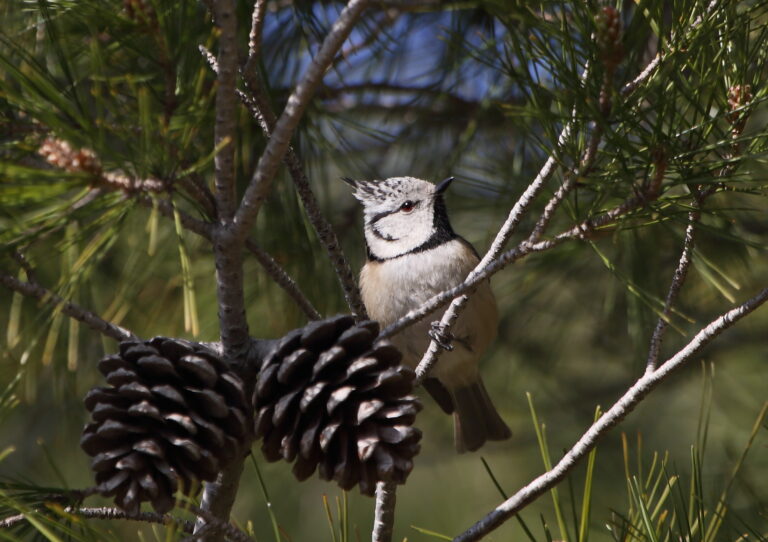 This morning we head south via Saint Martin de Crau to the Peau de Meau reserve in another part of the Coussouls de Crau stony plain but the wind is still too strong for scanning with scopes although we still find a steel blue-backed male Merlin sitting on a rock pile, just minutes after setting off. As well as plenty of Skylarks, Meadow Pipits and a few Linnets, we spot two White Storks battling their way north against the stiff wind, but still no sandgrouse or Little Bustards, despite the pictures on the nature reserve signs. From the shelter of a barn we watch a Wild Boar gallop by as if running for its life, and minutes later a pack of seven hunting dogs race by on the trail of the fleeing boar, followed by the dog handler in his 4 x 4 truck. What a disgraceful ‘sport’ this is, particularly on a nature reserve with numerous signs proclaiming a sanctuary from hunting. Meanwhile, we had to pay for a permit for the privilege of entering the reserve on foot! 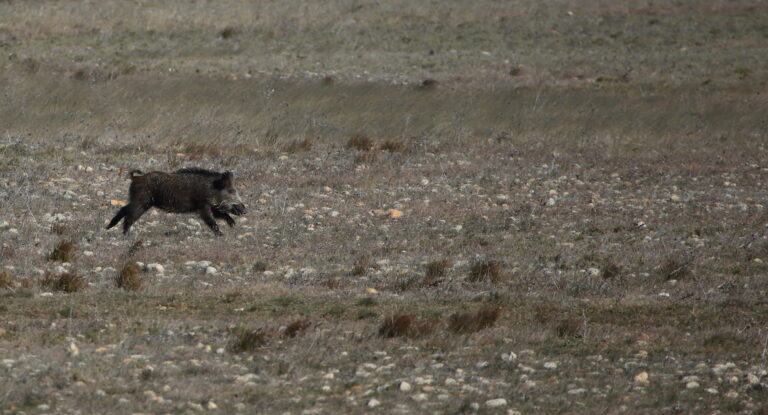 From here we move on to the Marais du Vigueirat reserve on the eastern fringe of The Camargue. After a picnic in the sunshine, a stroll around the reserve produces our first sighting of numerous Coypu, a large aquatic rodent with the tail end of a Rat and the front end of a Beaver. Meanwhile a Marsh Harrier flushes a flock of around 100 Glossy Ibises. Other sightings here include Green Sandpiper, Little and Great White Egrets, Yellow-legged Gull, Water Pipit, Peregrine, Sparrowhawk, Short-toed Treecreeper, a Kingfisher posing on fence posts and looking resplendent in the bright sunshine, a couple of White Storks, several Snipe and dozens of Greater Flamingos, while 50 or so Cranes fly over, calling as they go. 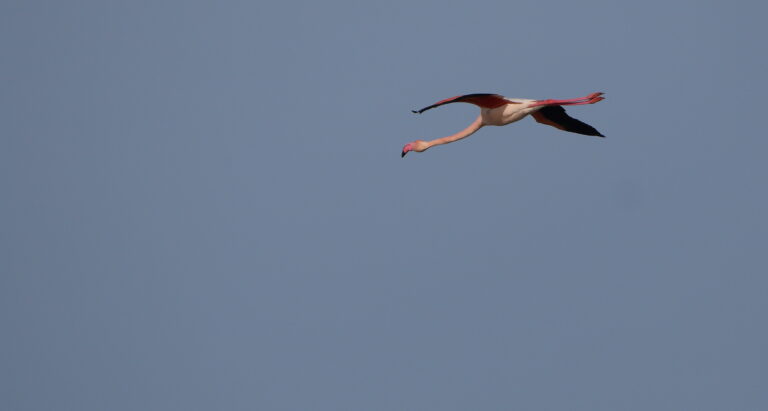 Next, we decide to try for another rendezvous with ‘Le Grand-duc’, near Les Baux, arriving about twenty minutes before sunset at around 5.55pm. By 6pm I decide to call it a day and just as I fold up the tripod, an awesome Eagle Owl enters stage left to land on one of the many rocky pinnacles! Setting up the scope again, the view is spectacular with its ‘horny’ ear tufts and deep amber eyes starring straight into the scope! Wow, what a result at last.
Hooray, there is no wind today for our sortie into Le Camargue, where we soon find dozens more Cranes and hundreds of House Sparrows along the roadsides en route to La Capelière, a reserve on the east side of the vast Etang de Vaccares. Inside the reserve, along the Sentier des Ranettes (Tree Frogs) some of the group actually stumble upon one of these tiny green frogs, while we all get close views of two Firecrests. 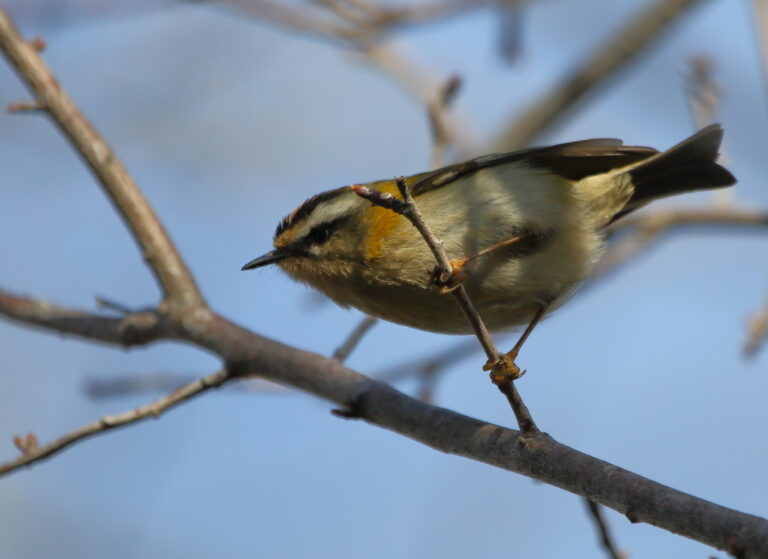 Further on two Foxes peer inquisitively from the edge of the reeds, a rufous dark phase Booted Eagle circles overhead before drifting northwards, we enjoy plenty more views of rosy pink flamingos and find a Wall Butterfly soaking up the lovely warm sunshine back at the visitor centre. After a picnic lunch here we head further south, ending up on the coast at Plage d’Arles, where we find a dozen Black-necked Grebes, with ruby red eyes, and a mixture of waders including Avocet, Sanderling, Dunlin, Little Stint and best of all, smart Kentish Plovers.
Still needing Wallcreeper, we decide to return to Les Baux, hoping to nail this iconic bird, particularly as it’s Diane’s birthday, so what a treat that would be. Arriving at 9am, and with no wind, there is a definite feel that spring is in the air as the birds are very active this morning with plenty of singing going on. We begin with very clear views of a male Sardinian Warbler, showing well in a bare bush, followed by the ‘usual suspects’; Rock Dove, Blackcap, Black Redstart and Blue Rock Thrush, as we patiently watch the cliffs below the medieval crenellations of this old village perched high on a rocky pinnacle. Around 9.45am, someone spots suspicious movements at the far end of the cliffs, and as we home in a Wallcreeper reveals itself for all to see, and even allowing views in the scope as it works its way across the vertiginous rock faces like Spiderman. Constantly clinging to its vertical world with such ease, it is surely one of the most aptly named of all birds. Wow, how lucky is that to spot such a small bird in such an extensively rocky place, crumpled and pitted into so many nooks and crannies for the bird to disappear into. Meanwhile, amid the ‘dawn chorus’ a trill rings out, alerting us to the presence of a Cirl Bunting, which obligingly sits atop a nearby rock in full song. Next, a couple of Serins join the throng and we are soon enjoying close views of these tiny songsters, sounding like tinkling bunches of keys. Strolling on below the cliffs, further plum sightings include a pair of Crested Tits foraging in an adjacent pine and Crag Martins preening on a rocky ledge. Next we head into the village centre hoping for another speciality which regularly winters here, and as we round a corner in the narrow streets we stumble upon half a dozen or so Alpine Accentors attracted to a kind lady’s fat balls in a cobbled courtyard, allowing the best possible views of these ‘Dunnocks on steroids’ at just six paces! 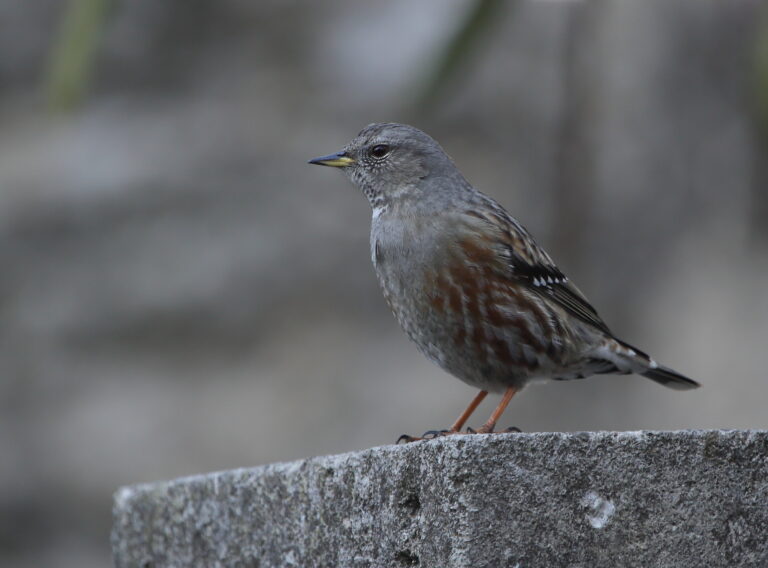 After a picnic lunch we return to the stony plain of La Crau where we find a pair of Little Owls showing very well in a bare tree and enjoy cracking views of Southern Grey Shrike, close enough to show the fine hook at the end of its rapacious bill. A singing Woodlark rounds off a very productive and enjoyable day before we head back to the villa for another superb haut cuisine dinner, followed by a ‘firework display’ on Diane’s birthday cake.
Despite all the paperwork needed to get here it had all been worthwhile, thanks to a lovely hotel offering superb meals, and super sightings of top birds like Black-necked Grebe, Cattle Egret, Glossy Ibis, White Stork, Greater Flamingo, Booted Eagle, Crane, Kentish Plover, Calandra Lark, Crag Martin, Water Pipit, Alpine Accentor, Black Redstart, Blue Rock Thrush, Sardinian Warbler, Firecrest, Crested Tit, Southern Grey Shrike, Serin, Citril Finch, Cirl, Rock and Corn Buntings, and of course, Bonelli’s Eagle, Wallcreeper and the magnificent Eagle Owl. Not a bad lot for a relatively short trip, particularly given the almighty wind on the first two and a half days.