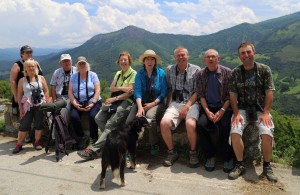 Due to a fog-bound Asturias airport, we almost fail to land and could have ended up hundreds of miles off course in Bilbao, but fortunately, here we are as planned in the hill top medieval Castillian town of Toro, where the Colegiata, an imposing biscuit coloured Romanesque church, serves as a rocky pinnacle for bill-clapping White Storks, whistling Spotless Starlings and hordes of screaming Swifts. 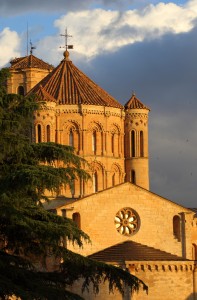 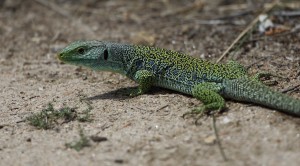 An hour’s drive due west is the beautiful Duero valley, where the river winds through a rugged gorge, marking the border with Portugal. First stop is the Ermita de Nuestra Señora del Castillo, alive with singing Serins, as well as Alpine Swift, Crag Martin, Hoopoe, Woodlark, Cirl Bunting and a Dartford Warbler singing for us just six yards away, making a great photo-opportunity. Besides the wonderful views from the mirador here, good sightings include a large green Ocellated Lizard, with a gorgeous blue spotted pattern, plus Red-rumped Swallow, Cuckoo, Egyptian Vulture, plenty of Griffon Vultures, a beautifully marked Rock Bunting showing really well, along with a lovely male Blue Rock Thrush, while vivid yellow Golden Orioles flash across the river below as if fleeing Portugal. Moving on to the Mirador Peña del Cura we enjoy lunch amid more fabulous views, along with a very showy and vociferous Subalpine Warbler. Not far away is the Ermita de San Miguel, where a gentle stroll produces great views of a smart Woodchat Shrike, along with Crested Tit and fleeting views of more Golden Orioles, while the Nightingales remain invisible. Last stop of the day is at the Puente de Requejo, a spectacular giant Meccano structure above the Rio Duero almost 300 feet below. As well as Crag Martins and Red-rumped Swallows, we get good views of Black Kite, a circling Goshawk and a pair of Blue Rock Thrushes, delivering a large cricket and an even larger lizard to their nest.

Today we are in a completely different landscape; a gently rolling treeless patchwork of ochre soil, grasses in pastel shades, ripe yellow barley, blood red poppies and a big blue sky, and within ten minutes of leaving Toro the outlines of two Great Bustards break the skyline, followed by sightings of a male Montagu’s Harrier, a female Marsh Harrier, a male Wheatear and a pair of Short-eared Owls, all from the same spot! A little further we stop for an unusual melanistic Montagu’s Harrier and a Great Bustard in flight. At Villarín de Campos, the shallow lagoon has dried out, but Rock Sparrow, blue-headed Yellow Wagtail and both light and dark forms of Booted Eagle all show well. Next sighting is a single Flamingo circling as if searching for a wet landing in this dry landscape. Further on we find more Great Bustards and scope a Zitting Cisticola resting on a bush. The air is peppered with raptors galore in every direction, including Marsh and Montagu’s Harriers, Red and Black Kites, Booted and Short-toed Eagles, Buzzards, Kestrels and shed loads of Lesser Kestrels. A group of at least two dozen male Great Bustards, standing proud with thick grey necks, white whiskers and bright chestnut patches is an impressive sight while having a picnic. Soon after lunch, a small lagoon is a magnet for Lapwings, Black-tailed Godwits, Black-winged Stilts and an Avocet, with a pair of melanistic Montagu’s Harriers patrolling elegantly here. The female is the colour of dark chocolate, while the sooty male stares into the scope with beady yellow eyes, trumping the Great Bustards for my star bird award. We finish up at Otero de Sariegos, an abandoned tumble down village at the end of a luxurious newly laid tarmac road complete with freshly painted white lines; why? Meanwhile, the ruined houses offer a ‘des res’ for all the Swifts, Swallows, Rock Sparrows and Black Redstart, while multi-coloured Bee-eaters also show well here.

It’s time to leave Toro and head north across the seemingly endless Castillian plain, dotted with tiny almost deserted ramshackle villages and impressive medieval castles. After a couple of hours driving, the plains rise up into the foothills of the Cantabrian range, where a short stroll reveals a taste of the scenery to come with Chamois on the skyline high above, along with close views of Bonelli’s Warbler in the pines. The last leg of the journey across the range into Cantabria is particularly convoluted, with numerous hairpin bends, and a circling Honey Buzzard to add to the list. 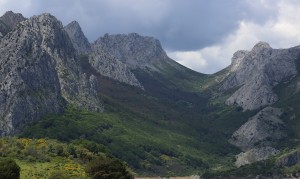 The day begins with a Dipper right outside the hotel. It’s the first day of June and the calm sunny weather is perfect for the cable car ride from Fuente Dé up into the Picos de Europa. Waiting for the first cable car of the day is an ideal moment for a group photo against the spectacular backdrop of the amazing scenery here. Just after the shutter clicks someone shouts “Lammergeier’, and while soaring against the cliffs, it could feasibly have been in the group photo! As we track the giant bird it lands on a ledge, allowing an unbelievably detailed view in the scope of its bright eyes staring from a black face mask, black beard and long hooked beak, as it tears at the gizzards of a piece of carrion; an awesome bird in an awesome landscape. The views from the top of the cable car at around 6000 feet are quite literally breathtaking, with towering limestone peaks in every direction. This is the home of the high altitude specialities; Water Pipit, Alpine Accentor, Alpine Chough, Snowfinch and the highly sought, almost mythical Wallcreeper. Even up here there are Red-billed Choughs, along with Wheatears and Black Redstarts, but we soon have a Water Pipit in the scope, perched on a nearby rock and there is no shortage of Snow Finches, looking great as they fly against the deep blue sky, but even better when perched on rocks for quality scope views. By noon we have also seen at least three Wallcreeepers in flight, with their distinctive rounded fluttering wings at fairly close range, while Alpine Choughs are virtually feeding from the hand during our picnic lunch. By early afternoon, Alpine Accentor has been the trickiest bird to see well, but this soon changes, when one perches on a nearby rock, covered with orange lichens, just like the rusty flanks of the bird. High above, one of the Griffons looks different, and we quickly realise it is a Black Vulture. A stake out of the peaks produces several tantalising sightings of Wallcreepers frantically flitting around the summits, but they are too mobile to catch in the scope. Back at the cable car station, we enjoy a rare opportunity to look down on a variety of raptors including a Short-toed Eagle, a couple of Peregrines, several Griffons and an Egyptian Vulture, which means we have now seen all four European vultures in one day! With good views of Water Pipit, Alpine Accentor, Alpine Chough, Lammergeier, Snow Finches galore and several Wallcreepers, all from the ‘top drawer’, this was indeed a ‘red letter day’. 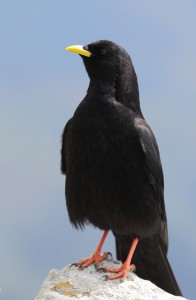 We were so lucky with the clear skies yesterday, as the cloud is below the peaks this morning. Lower down ‘our valley’ the tiny hamlet of Brez is heaving with Black Redstarts, along with a superb male Common Redstart singing from bare branches just as we leave Brez on footpath 27. Other sightings along the way include Spotted Flycatcher, Red-backed Shrike, Tree Pipit, Cirl Bunting, a Griffon on a fairly low rock and a couple of showy Bonelli’s Warblers. As the path winds through Oak and Beech woods, we get great views of Middle Spotted Woodpecker and a feisty little Firecrest, with a blazing orange punk-style hairdo. Further on we find Short-toed Treecreeper, Chough, Raven and another Rock Bunting, arriving back in Brez for a picnic lunch in full sunshine. This afternoon a visit to the mirador above Pendes is rewarded with magnificent views of the dramatic mountain scenery, as well as Egyptian Vulture and a very obliging Wryneck, seen very well by all.

After three nights in Espinama, we had seen a good selection of birds within sight of the hotel, including Dipper, Grey Wagtail, Swallow, House Martin, Redstart, Black Redstart, Spotted Flycatcher, Blackcap and Serin. With the temperature less than half what it was yesterday, it’s time to leave Espinama, but more low cloud is not conducive to the planned scenic drive as several of the mist shrouded miradors have no views at all, and so a visit to the coast seems like a good idea. The Villaviciosa estuary adds a few new birds to the trip list including Whimbrel and Spoonbill, followed by Shag and Gannet offshore at Tazones, making a grand total of 109 different birds seen in a wide range of fabulous landscapes. How remarkable to see more Wallcreepers than Mistle and Song Thrushes combined!