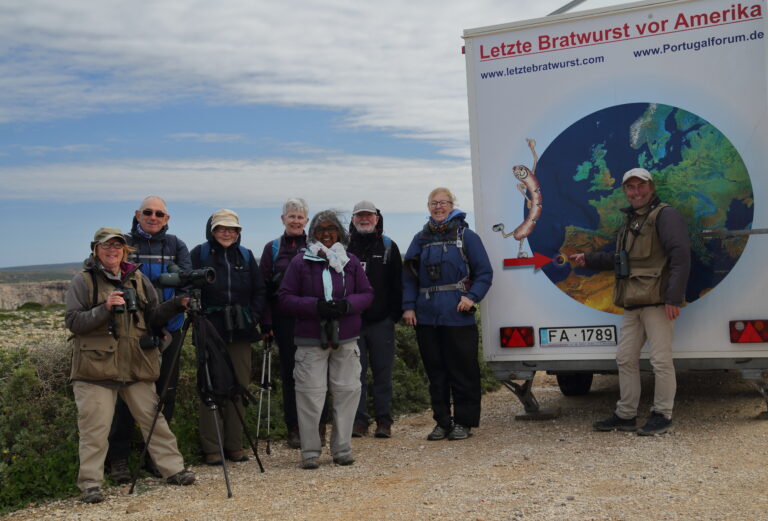 After settling in at the lovely Lemon Tree Villa, we visit the nearby Fuseta saltpans where we instantly find a teeming variety of local specialities including hundreds of Greater Flamingos, a couple of dozen Spoonbills in smart breeding plumage and plenty of elegant Black-winged Stilts, as well as Curlew Sandpipers, dainty Kentish Plovers, a Little Stint, a White Stork and a Whimbrel. Besides the waderfest, we also spot Audouin’s, Yellow-legged and pink-flushed Slender-billed Gulls plus Crested Lark, Sardinian Warbler, displaying Zitting Cisticolas, a jangling Corn Bunting and a stunning blue-headed Iberian race Yellow Wagtail, while handsome Woodchat Shrikes seem to be on every available perch!
On the drive back to the villa we have to stop for a Hoopoe staging an Extinction Rebellion style sit in in the middle of the road! 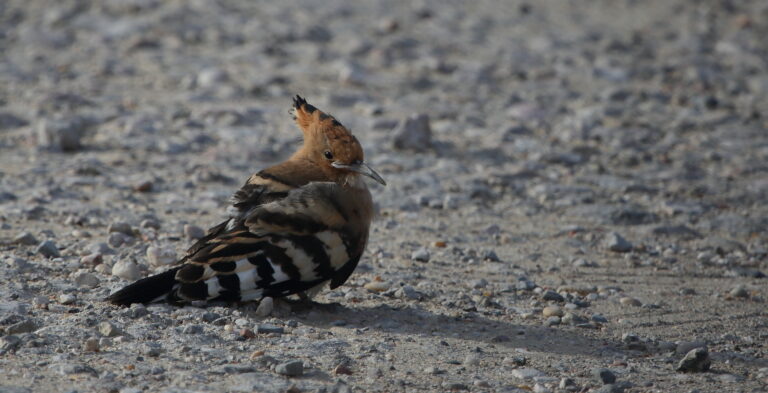 This morning feels a lot cooler than the 16°C claimed by the van’s dashboard thermometer, so we don all available layers for a visit to the Alvor estuary, where we begin with a group of Bee-eaters looking resplendent on their treetop perches, along with good looking Azure-winged Magpies, an immaculately glossy Spotless Starling and a singing Serin. Throughout this roadside stop the air is filled with Barn Swallows, House Martins and Swifts, all clearly on migration, and amongst them all, we spot a few Red-rumped Swallows. There’s an unseasonably cold wind at the shore, making it feel like England’s east coast in mid winter, although views of Sardinian Warbler and Caspian Tern would be out of place there. After a picnic lunch on a sheltered beach with close views of a Whimbrel, we return east via Pera Marsh, where we find a White Wagtail amongst a big ‘fall’ of Iberian Yellow Wagtails. Other great sightings here include another Caspian Tern, plenty more Black-winged Stilts, the now obligatory Woodchat Shrikes, an awesome Purple Swamphen with massive red feet, a Collared Pratincole in graceful flight and, best of all, a Jack Snipe feeding in full view with a characteristic bobbing action. 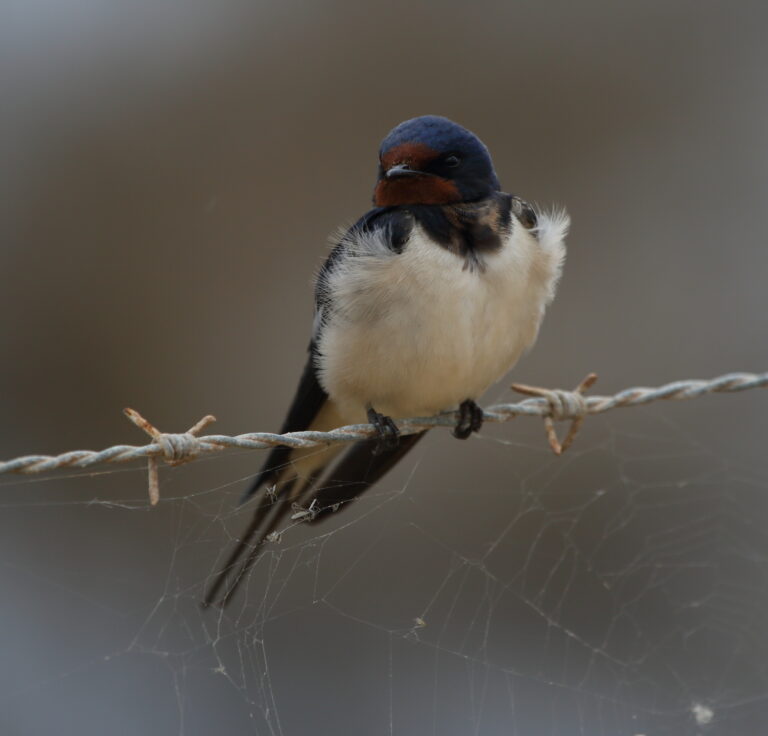 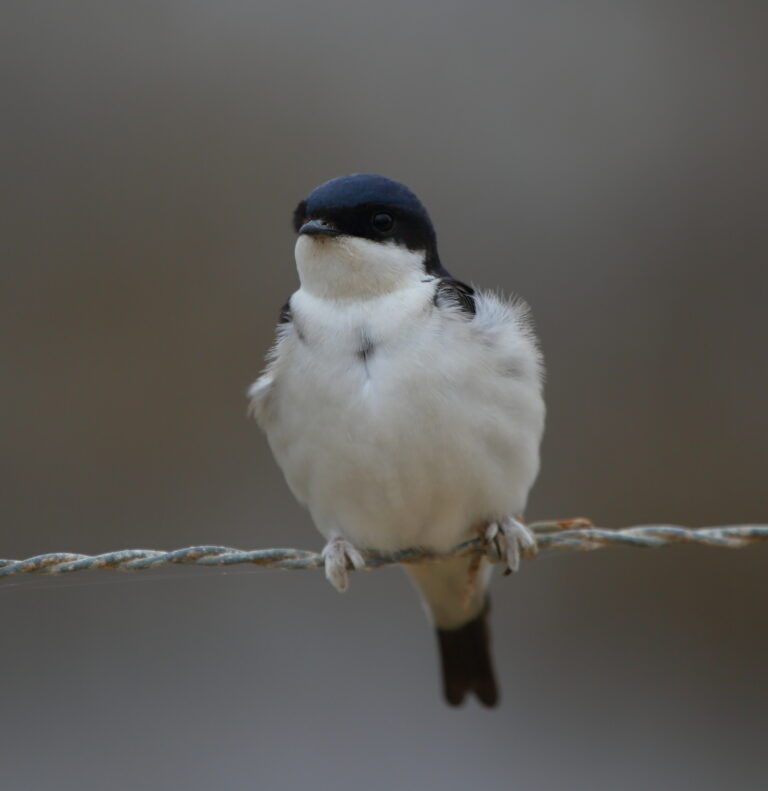 After a very wet night, it’s still cold and wet first thing as we set off to the Castro Marim Reserva Natural at the easternmost point of the Algarvian coast on the border with Spain. Early birds here include Green Sandpiper, Booted Eagle and Alpine Swift, all new for the trip. Meanwhile, the blustery conditions hamper our search for the localised Spectacled Warbler, but we do find Curlew Sandpipers showing signs of their rusty breeding plumage along the shores of the Rio Guadiana which separates Portugal from Spain, as well as more Kentish, Grey and Ringed Plovers, Turnstones and Dunlin. Flowing from north to south here, the Guadiana must be a useful highway for migrants like the super blue Roller which flaps by on its northward bound journey. Back at the visitor centre picnic area we are serenaded by a Nightingale which obligingly shows remarkably well for such a notoriously secretive bird as it hops along the ground in full view barely ten yards away from us! Definitely a contender for bird of the day.
Moving on to another part of the reserve, a fly by Purple Heron is new for the trip, along with a few milk chocolate brown Pallid Swifts among the dark chocolate Common Swifts, zooming by on their journey north. Further along the track we enjoy really close views of a couple of Short-toed Larks and Slender-billed Gulls, and even pinpoint a Stone Curlew, thanks to a single whistling call.

Today we head west until the road runs out at the Cape Saint Vincent lighthouse, the westernmost point of mainland Europe! Offshore, the seawatching is quiet apart from loads of Gannets streaming north, but we soon find a couple of Black Redstarts and then a Peregrine Falcon. Exploring the hinterland of the cape, we find a superb male Little Bustard, displaying his grey head and black neck, but with no sign of any ‘friends’. After a picnic lunch amid a multitude of wildflowers, we find Subalpine Warbler and Pied Flycatcher right beside the track and probably on migration. Passing through a collection of ramshackle farm buildings, I comment that “there is bound to be a Little Owl here somewhere”, and within seconds, there it is, perched on the top of a tall post, right next to a farmhouse ruin! A flock of forty-odd Choughs is another good sighting here. It starts to feel warm at last as we approach the nearby pine woods, and spot a couple of Thekla Larks, along with Redstart, Pied and Spotted Flycatchers and two very unexpected male Bramblings in the woods! Where else could you see such an unlikely mix of birds in one day as White Stork, Woodchat Shrike, Subalpine and Sardinian Warblers, Bee-eater, Chough, Pied Flycatcher, Brambling, Gannet and Little Bustard!
Our goal today is to find a Great Bustard by 9.30am. Setting off at 7.45am we drive north into Baixo Alentejo and arrive at Castro Verde just before nine. Given the choice between bustards and custards, the group chooses custard tarts in the Intermarche café and so we arrive at the ‘bustard plains’ two minutes behind schedule, but by 9.35 we have eleven Great Bustards in view, with several magnificent males impressively strutting their stuff. Meanwhile, from the same spot, a male Little Bustard displays to a female on the other side of the road! While the male Great Bustards turn themselves inside out into white ‘foam baths’, the Little Bustard repeatedly recoils his black and white neck, while puffing out his chest before blowing a clearly audible ‘raspberry’ and occasionally leaping up with flapping wings; possibly the best view of a Little Bustard I have ever seen! Meanwhile, a pair of Montagu’s Harriers patrols the open rolling plain. Further along the road we find another displaying male Great Bustard with an entourage of eight females, while a high flying Calandra Lark also shows well once landed on a fence post. Moving on, a scan of the landscape produces another dozen Great Bustards, while nearby White Storks nests are also home to numerous pairs of Spanish Sparrows. A stroll through meadows of purple Viper’s Bugloss, alive with singing Calandra Larks and Corn Buntings galore, also produces an immature Spanish Imperial Eagle, and then a second one being chased by a relatively tiny Raven, while an invisible Quail calls from somewhere amid the colourful flora. By midday we had seen a tally of around forty Great Bustards! 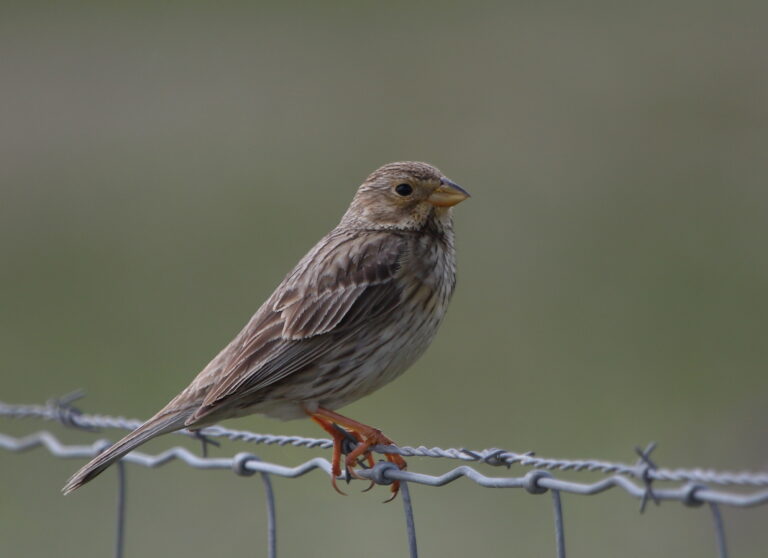 Moving on to a hill top with panoramic views of the surrounding landscape for a picnic lunch we spot Booted Eagle and a singing Serin here. This afternoon on the way to Mertola, new birds include Iberian Grey Shrike and Crag Martin, followed by close views of a singing Rock Bunting in the gorge below the ramparts of Mertola castle and great views of a pair of Lesser Kestrels, on the old bridge across the river, close enough to see their pale grey talons! 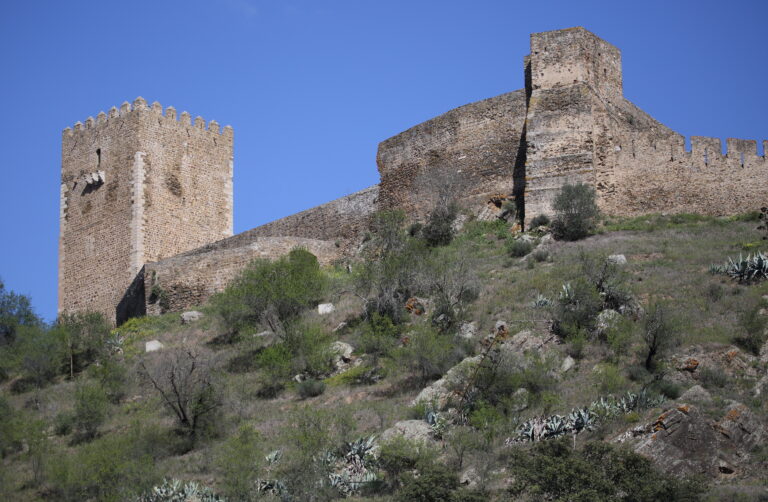 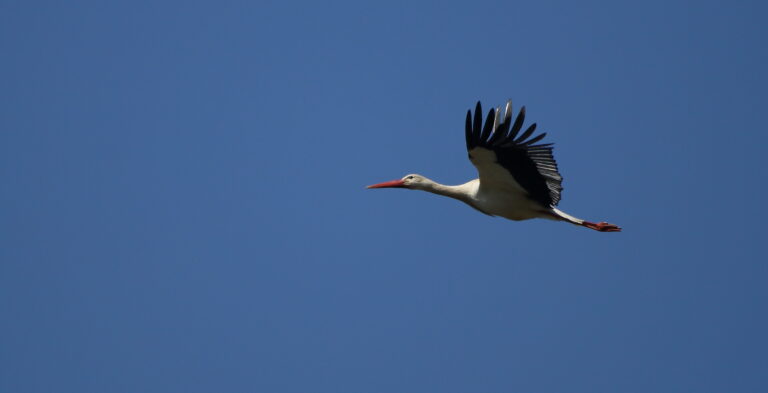 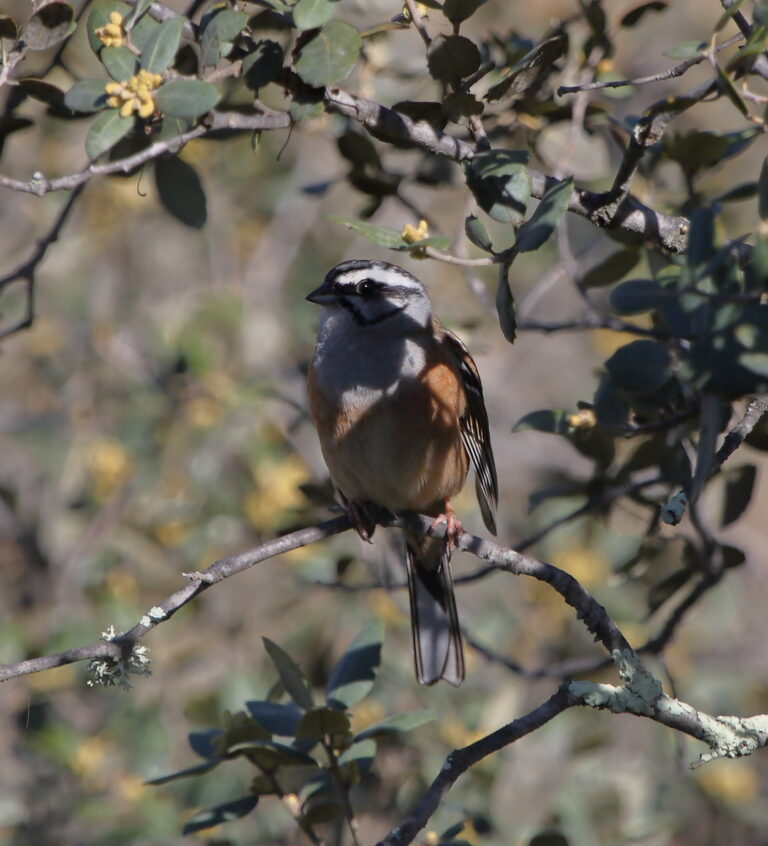 For our last day in the field we visit nearby Quinta do Lago on the shore of the Ria Formosa, where the shoreline harbours the ‘usual suspects’ like Spoonbill, White Stork, Sanderling, Dunlin, Grey, Ringed and Kentish Plovers, Whimbrel, Turnstones in bright breeding plumage and a couple of Auduoin’s Gulls. Arriving at the famous golf course pool, we find plenty of vocal Black-headed Weavers, a male Red-crested Pochard, an over flying Osprey, a Purple Swamphen using its huge red feet to hold juicy reed stems, while pecking them with its heavy bright red bill, and a singing Short-toed Treecreeper. We even spot the skulking but vociferous Cetti’s Warbler, and a Viperine snake ‘sitting’ next to the path, but best of all, we also enjoy superb scope views of a pair of well camouflaged Little Bitterns, although the male had the brightest red bill I have ever seen. 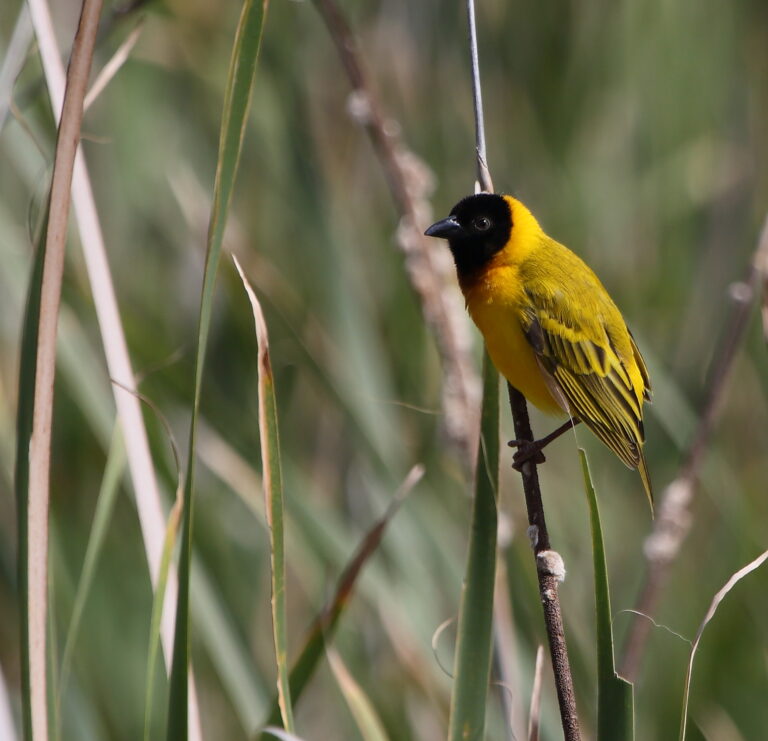 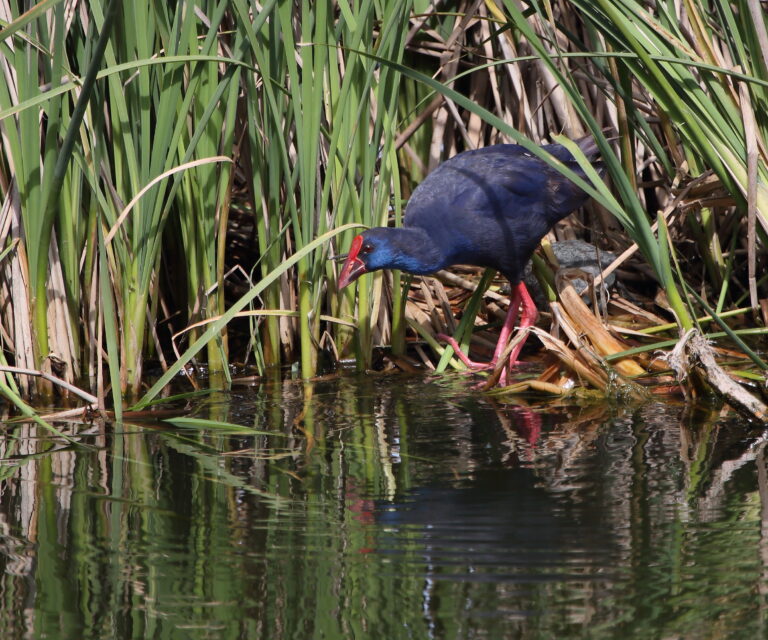 After our picnic lunch with an inquisitive Azure-winged Magpie it’s time for ‘operation Wryneck’, but first we find a posing Yellow Wagtail and an obliging Black-winged Stilt. With cryptic patterning exactly like the tree bark it perches on, Wrynecks can be hard to pinpoint, but our luck is in as one breaks cover amongst the Umbrella Pines, providing fantastic views in the scope and bringing the final bird count to a creditable total of 127 species, including a dazzling variety of ‘stars’ like Spanish Imperial Eagle, Lesser Kestrel, Little Bittern, Spoonbill, White Stork, Purple Swamphen, Stone Curlew, Auduoin’s and Slender-billed Gulls, Caspian Tern, Calandra and Short-toed Larks, Wryneck, Hoopoe, Azure-winged Magpie, Roller, Bee-eater, Nightingale, Serin, Rock Bunting and of course, the Great and Little Bustards.