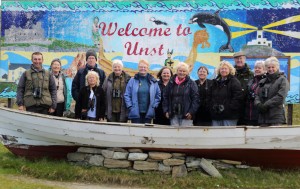 First stop is Sumburgh Head with plenty of Wheatears, Rock Pipits, Fulmars, Shags and Guillemots, many with white spectacles, but surprisingly few Puffins, while Great and Arctic Skuas harry the birds out to sea. The nearby Pool of Virkie produces close views of a nice group of Ringed Plover and Dunlin. Next stop is the Loch of Spiggie where about thirty Great Skuas are having a bath and a Snipe poses on a post for a cracking view. We count eighteen Common Seals, including several pups, on the beach at Scousburgh Bay and then head north to the hotel in Scalloway.

We take the 10am ferry from Lerwick across to Bressay and on to Noss by Zodiac piloted by the warden. A Great Skua sitting outside the visitor centre emphasizes just how bulky these birds are, and with a mean looking eye and a sharply hooked beak, these brutes are not to be messed with. The flat calm sea raises hopes of easy Otter sightings but we have to make do with Eider, Red-breasted Merganser and good views of Grey and Common Seals hauled out on the rocks. On the east side of the island the vertical cliffs of the Noup are plastered with tens of thousands of noisy Gannets, while others cruise by at fairly close range. What a breathtaking site this is. After dinner, we set sail for Mousa. Once ashore the stone walls are purring with the strange calls of the tiny Storm Petrels nesting within the crevices. At the massive stone broch which has weathered the storms for two thousand years, the onset of the ‘simmer dim’ half light around 11.45pm draws in the Storm Petrels in gradually increasing numbers and so by midnight there must be hundreds fluttering like bats around the high walls of the broch. Back at the boat at 1.15am it is still not properly dark. What a magical experience.

Heading north along the spine of the ‘Mainland’, through a treeless moorland landscape, we begin with a family of Whooper Swans with four cygnets and plenty of Arctic Terns on the Loch of Tingwall, followed by a Mute Swan, loads of Eiders and a fabulous close view of a Red-throated Diver off Girlsta pier. There are plenty of Black Guillemots on the ferry crossing to Yell, and as we comb the west coast of the island we find our first Otter fishing on the far side of Southladie Voe, as well as a group of fourteen Golden Plovers in an adjacent field. A second ferry takes us to Unst, where we find a Goldeneye and another Whooper on the Loch of Snarravoe, but no sign of the Glaucous Gull reported here yesterday. It’s late afternoon by the time we arrive at Baltasound, where a mixed group of waders on the shore includes a Turnstone in very smart breeding plumage, while an Otter is fishing further east in the sound. Driving slowly along the shore road, we relocate the Otter at much closer range and as we watch he works his way toward us before doing a magic disappearing act without a trace after getting wind of his audience. Following up on reports of a female King Eider in Balta Sound, we train the scope on a lone Eider sitting on a float not far from the pier. Lo and behold it’s the ‘queen’, with a ginger complexion, dark bill and a smiling face! That’s two top sightings within minutes and within sight of the hotel!

Today we take the ferry to Fetlar, home to most of the British population of Red-necked Phalaropes, and although the Loch of Funzie is the place to see them there is no sign of any at all and so we have to make do with close views of Snipe, Redshank, Dunlin, Wheatear and a pair of Red-throated Divers, with pin-striped necks and visibly red throats! Strolling down to Funzie Bay, we still need Twite and here they are, feeding on the short turf right next to the track! By now the weather is quite miserable so we head for the café and then the ferry back to Unst, where the Glaucous Gull has reappeared in a field beside the road next to the Loch of Snarravoe! It’s an immature bird with washed out brown plumage, white wing tips, black-tipped bill, and larger than it’s Herring and Lesser Black-backed cousins.

The miserable grey weather continues this morning, but undaunted we begin the day with a photo shoot of the famous bus shelter, just round the corner from the hotel, adorned with paraphernalia on a Puffin theme including chairs decorated with paintings of Puffins and cushions bearing embroidered Puffins. Next we scour the moist turf of the Keen of Hamar for rare Frog Orchids and then stop off at a bay called Harold’s Wick where a dozen Common Seals are hauled out on the rocks just yards from the beach. Next stop is the Unst Heritage Centre and then the Herma Ness National Nature Reserve, where we find a congregation of at least 150 Great Skuas bathing in the Loch of Cliff, and a couple of Twite feeding next to the car park. From here it is a walk of about an hour through ‘Bonxie Land’, enjoying close views of Dunlin along the boardwalk, to spectacular cliffs, stacks and arches, white with Gannets in their tens of thousands (around 27,000 pairs), a sight with a high ‘wow factor’. To the north is a murky view of the Muckle Flugga lighthouse and Out Stack, the most northerly point of the British Isles, and a long way from the Bishop Rock in Scilly where some of us have also birded together! Not a bad day given the weather.

Having ‘done’ Unst and Fetlar, we retrace our route across Yell back to the mainland and the airport at Sumburgh for the flight home, with a brief stop at the Loch of Vatster, for a pair of Whooper Swans and five cygnets, via what would be a scenic route were it not for the poor visibility. 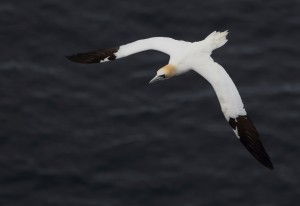