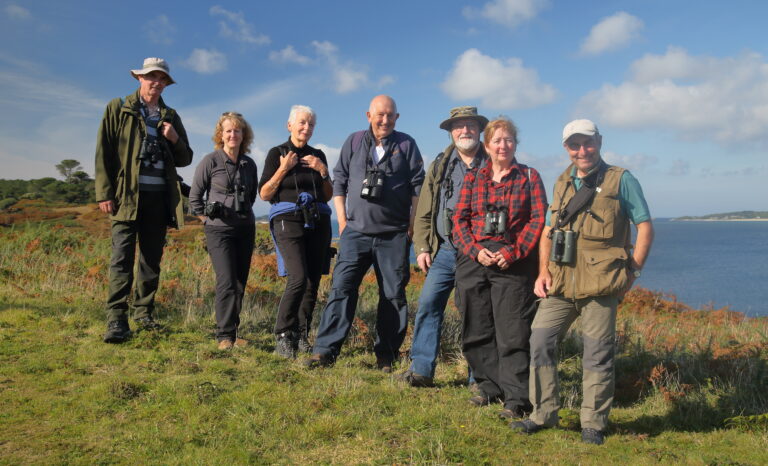 We set off on a ‘grand tour’ of Saint Mary’s under a glorious blue sky, with a subtropical airstream and warm sunshine, and yet this is the second half of October! Not far from The Wheelhouse, our first significant sighting is a female Black Redstart on a barn roof along the track to Peninnis Head. With such calm weather and a bird free airfield, it soon becomes clear that it’s a quiet day for bird sightings, so we make do with several Stonechats, a couple of lime green male Siskins on the path straight ahead of us and a Wheatear. Further on at Porth Hellick, we find several Ringed Plovers, a couple of Turnstones on the rocks around the bay and a Greenshank feeding in the shallows. Moving on to the nearby pond, we enjoy point blank views of Common and Jack Snipe both out in the open as if soaking up the sun! Meanwhile, a vocal Water Rail makes a very brief appearance with lightning speed and yet Diana still manages to grab a snapshot. A scan of the pool also produces a count of 23 Moorhens!
After a picnic lunch, we reach the north coast at Watermill Cove, in time to connect with scope views of a Red-backed Shrike, and then arrive at Newford duck pond just in time to see a show by a vagrant Dusky Warbler, all the way from Siberia! On the way back to town, after a stop at Juliet’s for afternoon tea, with loads of very tame House Sparrows, a visit to the hide in Lower Moors produces a feeding frenzy with five Snipe, two Jack Snipe and a Water Rail all out in full view and at amazingly close range; wow! By the end of the day, with ten miles on the clock, we had 47 birds in the bag, including Black Redstart, Water Rail, Jack Snipe, Red-backed Shrike and Dusky Warbler; just a quiet day on Scilly! 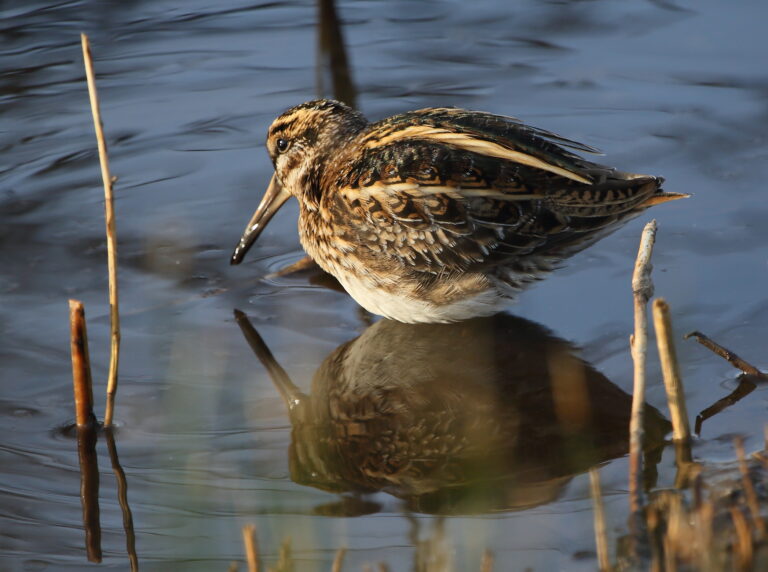 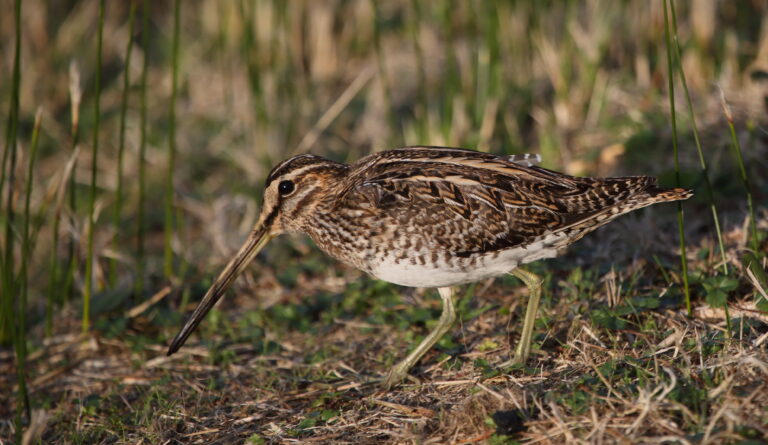 What a difference a day makes, as today’s view from The Wheelhouse window is one of uninspiring low cloud and a choppy grey sea. With few sightings to choose from we plump for Tresco, where Shelduck is new for the list, while the Abbey Pool has a first winter Mediterranean Gull among all the Great and Lesser Black-backs and Herring Gulls. As the rain eases, a Spotted Redshank shows well on the Great Pool and a Firecrest shows briefly in the adjacent evergreen shrubs.
After lunch overlooking the bay at New Grimsby, with a Greenshank on the shoreline, the churchyard produces two female Black Redstarts posing nicely atop the lichen encrusted gravestones, while a pair of ridiculously tame Siskins, pecking on the gravel path, allows Bob to approach to within three feet! This could take some beating but then a smart male Black Redstart shows really well on one of the sloping rooves in Old Grimsby.
Our island hopping continues with an afternoon visit to Bryher, a virtual stone’s throw across the narrow sound from Tresco. Our target here is yesterday’s Bluethroat near the Great Pool, where the lucky ones get a fleeting glimpse of its rufous tail as it darts into thick cover, while a couple of Pink-footed Geese on the pool are far more obliging. On the boat trip back to Saint Mary’s we add a passing Sandwich Tern and Grey Seals to the list as well as a couple more Med Gulls.
It’s another grey start with low cloud and winds up to 48 mph as we head to Porthloo Beach in search of Kate’s possible Blue Rock Thrush from yesterday, but there’s no sign today. Over at Lower Moors, we find 13 Snipe, but no Jacks or Water Rail. Other sightings this morning include two Sparrowhawks, a Kestrel and 41 Turnstones on Town Beach.
After lunch back at base we enjoy an exhilarating walk around the Garrison headland, watching Gannets diving into the heavy swell.
Hooray, the blue sky is back this morning and with no incoming flights for the last two days, our target bird is Siberian Chiffchaff, so we head for the favoured haunt at Lower Moors where the long faces don’t look promising, so we make do with Sparrowhawk, Water Rail and Jack Snipe. Meanwhile, at 9.59am, the chiffchaff is reported “showing and calling in garden opposite Elm Studio”, so we move on, spotting a female Black Redstart along the way, but still no sign of the blessed chiffchaff by the time we get to the studio. At 11.01am it’s reported again “in Standing Stones Field”, so we move in, arriving at the empty field around noon. Anne suggests we be patient and then a tiny bird suddenly disappears into the nearby bushes with a tell-tale song, so we know we’re in the right place at last! Then the bird pops out right in front of us, showing its diagnostic grey head and mantle for all to see; result! Ironically, just as we walk away, a calling Kingfisher dashes across the bushes and away, in the same direction as the chiffchaff!
After lunch beside picturesque Old Town Bay, joined by House Sparrows and Starlings, we head north, looking for a Water Pipit, but by now it’s getting too wet, although we do find a couple of Redwing and a fly by Peregrine. By mid-afternoon, the forecast of “three raindrops” is an understatement and we get washed back to base before an almighty downpour is blown in on a barrelling wind. 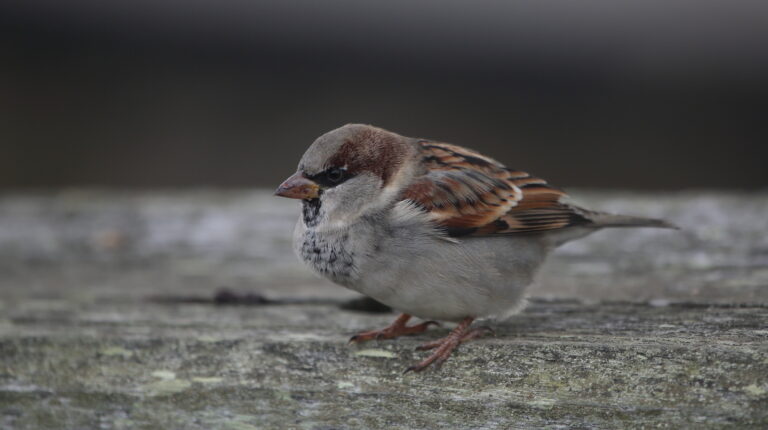 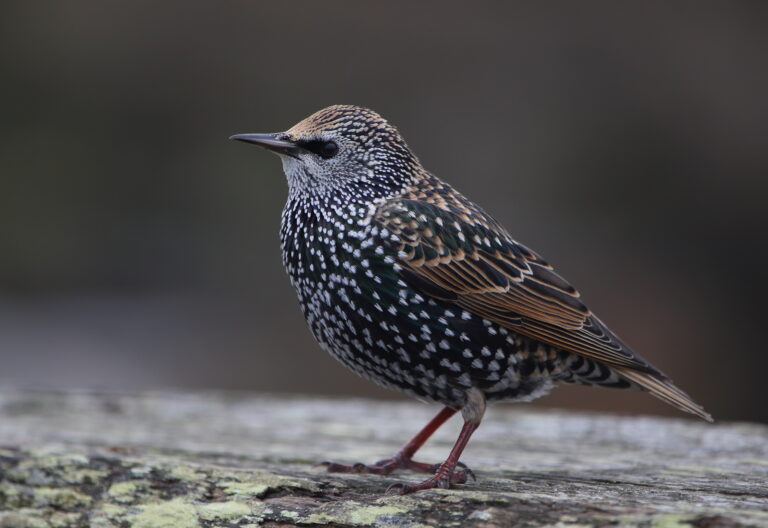 With a last throw of the dice, we decide to visit Saint Agnes on the trail of yesterday’s Red-breasted Flycatcher. On arrival, we find Redwings and Ringed Plovers, but no flycatcher. Meanwhile, news from Saint Mary’s includes several reports of newly arrived Ring Ouzels, so why not here too? Well, out on Wingletang Down, we spot a flying ‘blackbird’ with a white gorget, before it disappears behind one of the granite tors. As we close in it reappears on a smaller boulder, showing off an intricately patterned body, along with a browner female on the same rock, with similar markings and a feint brown gorget.
After a picnic lunch overlooking Saint Warna’s Cove, with the head of a Grey Seal bobbing like an empty bottle, a flock of around twenty Stock Doves passes over and news arrives at 12.07 of a Hoopoe back on Saint Mary’s, on “the turning circle of the airfield”! Twenty one minutes later it “flew to Old Town” and so we take the 2.15 boat back to Saint Mary’s. Meanwhile, at 14.02 the Hoopoe is “on golf course”, and at 14.03 “in front of green of second hole”! With a flag on a stick marking the bird’s location, it should be a straight forward find, but by 14.11 it’s “heading towards Holy Vale”, and now out of range on our last afternoon. If only it had stayed on the golf course. Instead, we home in on a Water Pipit, reported at 14.34 in a “ploughed field behind the beach to the east of Old Town Beach”. Around forty minutes later we find the field and there it still is, looking like a really clean Rock Pipit. By now it’s time head back to ‘town’ via the scenic route around Peninnis Head, passing a statuesque and beautifully marked Greenshank along the way. Finally, a male Merlin with very apt air force blue wings dashes by, bringing the bird list total to seventy species in what had been my quietest visit yet to Scilly. Nevertheless, we had clocked up 36.5 miles amid super scenery over the last five days, and seen notable sightings like Jack Snipe, Spotted Redshank, Water Rail, Merlin, Mediterranean Gull, Red-backed Shrike, Water Pipit, Black Redstart, Bluethroat, Ring Ouzel, Firecrest, Dusky Warbler and Siberian Chiffchaff, so not bad for a quiet week!