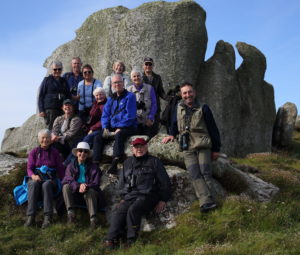 The Sky Bus from Exeter descended through a thick white blanket of cloud to ‘drop in’ on a grey drizzle-soaked St. Mary’s, just like the many grounded migrants that land in the Scilly archipelago each Autumn.

Yesterday’s miserable grey sky was replaced by a full rainbow over the harbour this morning and then a happily blue sky all day long. With a report of a Spotted Crake, still showing “insanely well at Rosehill end of Lower Moors”, it was a no brainer that this would be our first target of the day. After Wheatear and Rock Pipit outside the guesthouse on Porthcressa Beach, followed by a group of seven Turnstones on Porthmellon Beach, we joined a small group of birders on the Lower Moors nature trail, where we soon had the tiny crake feeding right under our noses alongside the edge of the trail, little more than four feet from us! The bird was so confiding that it was completely unperturbed by the audience looking down on it. How lucky was this to have such a secretive bird (only my second in a lifetime) ‘on a plate’ so early into the trip? Moving on, we found a Snipe snoozing by the pool, but missed a fleeting view of a vagrant Yellow-billed Cuckoo by a matter of minutes. Following the coast past Old Town church to Peninnis Head, there were no signs of the recently seen Red-backed Shrike or Wryneck, but plenty of Wheatears and Stonechats. What a lovely spot for a picnic lunch, with the occasional Gannet passing by offshore. Back at Old Town Bay, we found Common Sandpiper and Greenshank, followed by a male Redstart posing nicely near Tolman Point. A scan of the airfield produced loads more Meadow Pipits and Wheatears, followed by another seven Greenshanks in Porthhellick Bay, along with plenty of Ringed Plovers, a couple of Curlews, a Dunlin and a Little Egret. Meanwhile a Merlin flashed by, before landing on a rock, allowing a nice scope view for all in the group. On the road back into Hugh Town we scoped a Whinchat on a wire and then ran into a crowd of at least 150 birders clustered at the roadside, still hoping for a glimpse of the elusive ‘American Cuckoo’. Back in town, a lucky few watched a Honey Buzzard passing by the guesthouse! 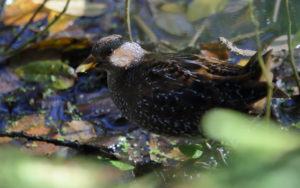 At 10.15am this morning we boarded the Surprise, bound for St. Martin’s, with yesterday’s Dotterel and Lapland Bunting on our wish list for today. Once ashore, the tiny hedged in fields were teeming with ‘garden birds’ like Collared Dove, Blackbird, Song Thrush, Robin, Dunnock, Wren, Starling and House Sparrow, but no rare visitors, such as last week’s Black-and-white Warbler. Once off the ‘main road’ we found a lone Whinchat, along with the customary Stonechats and Wheatears. The imposing red and white Day Mark beacon on St. Martin’s Head, with Gannets cruising by offshore, was an ideal place for a picnic lunch, particularly with a smart Snow Bunting showing so well and so close by. Meanwhile, it seemed we should have been here yesterday for the Lapland Bunting and Dotterel. On the way down to the quay at Higher Town, the long white sandy beach produced dozens of busy Sanderlings, followed by a couple of White Wagtails on the cricket pitch. Returning to St.Mary’s, the cunning plan was to return to Peninnis Head, on the trail of a newly sighted Red-throated Pipit, followed by the long-staying Red-backed Shrike and Blue Rock Thrush. Arriving at the paddock inhabited by three impressively large Gloucester Old Spot pigs, it seemed we were just a few minutes too late for the pipit. Moving on for the shrike, we “should have been here five minutes ago”. May be we should have started each outing at least five minutes earlier! With time now running out we returned to the guesthouse as a Peregrine made a brief fly past. It seemed we should also stay at each site five minutes longer, as both the pipit and the shrike showed up soon after we had moved on! It had been one of those days.

Short-toed Lark and Richard’s Pipit, reported yesterday on Tresco, were today’s targets. Once ashore we headed for the heliport, where the Short-toed Lark was actually still there, as if waiting for us, and showing nicely in the scope! However, the pipit had other ideas, while a male Whinchat posed nicely on a fence. Several Little Egrets adorned the trees overhanging Abbey Pool, where a Shoveler was new for the trip. After a picnic lunch in the sunshine, a stroll along Abbey Drive revealed a handsome Red Squirrel, followed by 13 Greenshanks beside Great Pool, where Gadwall was new for the trip. With incoming news of a Red-eyed Vireo back on St. Mary’s, we decided to take the earlier boat back, and on the rocky ride aboard the Meridian, we added fly by Spoonbill and Mediterranean Gull to the trip list. Back on St. Mary’s, we joined a small crowd of onlookers enjoying plum views of the vireo posing for the ‘trigger happy paparazzi’, and five minutes later we had the nearby Red-backed Shrike also posing in the scope; both surprisingly easy sightings in this ‘purple patch’. What a beautiful day that was.

With very little reported from the ‘off islands’, we decided to take our chances on St. Mary’s today, starting with a Sandwich Tern roosting on rocks in Porthcressa Bay. The breezy weather kept any small birds hunkered down, including the recently reported Wryneck, Red-backed Shrike and Red-eyed Vireo, although we did find a Spotted Flycatcher in the Old Town churchyard. After a tea break in the Old Town Café, we headed for the windsock on the airfield hoping to meet up with a Dotterel, showing there since our previous visit. Sure enough there it was. After a picnic lunch on the beach in tranquil Porth Hellick, the Blue-winged Teal and Pink-footed Geese had vacated the pool on Higher Moors, while the shelter of the densely wooded Holy Vale nature trail was strangely bereft of birdlife. In desperation, we continued to the duck pond at Newford, hoping for the long-staying female Green-winged Teal. Eventually we did find the said duck, preening and showing the telltale orange wingbar alongside the shiny green speculum. On the way back to town, the Turtle Dove seen earlier this afternoon was no longer around, concluding a day of mixed fortunes, and still no Blue Tit! 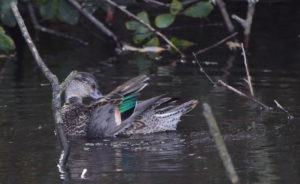 A report of an Arctic Warbler at 9.12am on St. Agnes caused a quick change of plan in favour of a boat trip in search of this rare warbler, which “flew to coastguards”. Meanwhile, back on St. Mary’s, a Swainson’s Thrush was reported five minutes after we departed; the day was full of promise. By the time we arrived at the right place on St.Agnes, there was no sign of the Arctic Warbler, so 11am at the Coastguards Café seemed like a good time for a tea break, but while we were busy supping, the warbler reappeared just around the corner, and once again we arrived just in time to see the empty bushes where it had been minutes earlier! You just couldn’t make it up. This afternoon there were no further sightings of the Swainson’s Thrush, which only the finder saw, but the very mobile and elusive Blue Rock Thrush, proving harder to find than the Scarlet Pimpernel, was sighted on and off at various rocky locations along the south coast of St.Mary’s. Nevertheless, by the time we arrived, there was no trace, despite a prolonged wait, although we did have excellent scope views of a Great Northern Diver. Needless to say, having moved on, the damn rock thrush reappeared almost two hours later! That evening, the daily log in the Scillonian Club confirmed what an unusually quiet day it had been.

Breaking news at 9.21am this morning; the Blue Rock Thrush, “between Morning Point and the beach in Porthcressa Bay”, putting it within sight of our guesthouse! An hour quickly passed as we staked out the rocky shore, along with most of the birders on the island, and yet I only manage a half second view in the scope (not worthy of a tick). As usual, ten minutes after we moved on the bird was seen flying across the bay! With news of a Red-breasted Flycatcher in the nearby Dump Clump, we joined a group of solemn-faced birders looking at the trees where the flycatcher had been, although we were rewarded with a Spotted Flycatcher and a Blue Tit; hooray! Moving on, there was no sign of the Yellow-browed Warbler, recently reported in Standing Stones Field, nor the Turtle Dove, amongst at least fifty Collared Doves at Sandy Banks Farm. With worsening weather, we decided to head back to town for an ‘early bath’. Ironically, the Red-breasted Flycatcher was subsequently reported back in the Dump Clump, along with the Turtle Dove! It seems we were often in all the right places at all the wrong times, leaving me in need of a lie down in a darkened room, by the end of the trip! I won’t mention the things which flew in, the day we flew out!

That was the quietest time I have ever had on the Isles of Scilly. Nevertheless, this trip still produced some good birds like Green-winged Teal, Spoonbill, Merlin, Honey Buzzard, Dotterel, Short-toed Lark, Whinchat, Redstart, Red-backed Shrike and Snow Bunting, plus amazing views of Spotted Crake and Red-eyed Vireo, and all amid wonderful scenery.