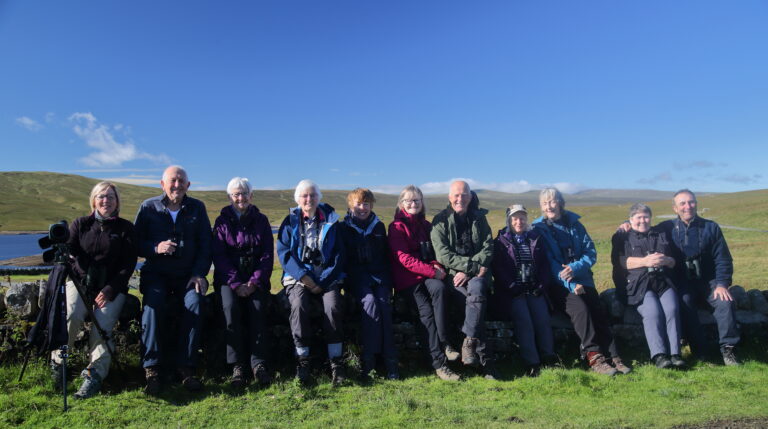 We begin the tour at Low Barns, a nice little nature reserve managed by Durham Wildlife Trust, where some busy feeders in front of the first hide afford close views of lots of small birds including Nuthatch, a pair of Great Spotted Woodpeckers, a female Blackcap, at least two Willow Tits, Coal Tit and a very obliging Wren on a dead tree stump. Moving on to the four star Hardwick Hall Hotel, new sightings on a stroll around the lake include Wigeon, Pochard, Stock Dove, Mistle and Song Thrushes, a lovely Grey Wagtail and a very confiding Heron. 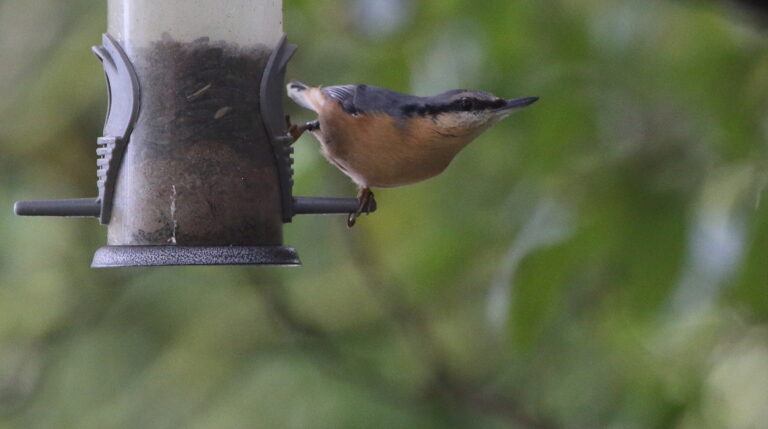 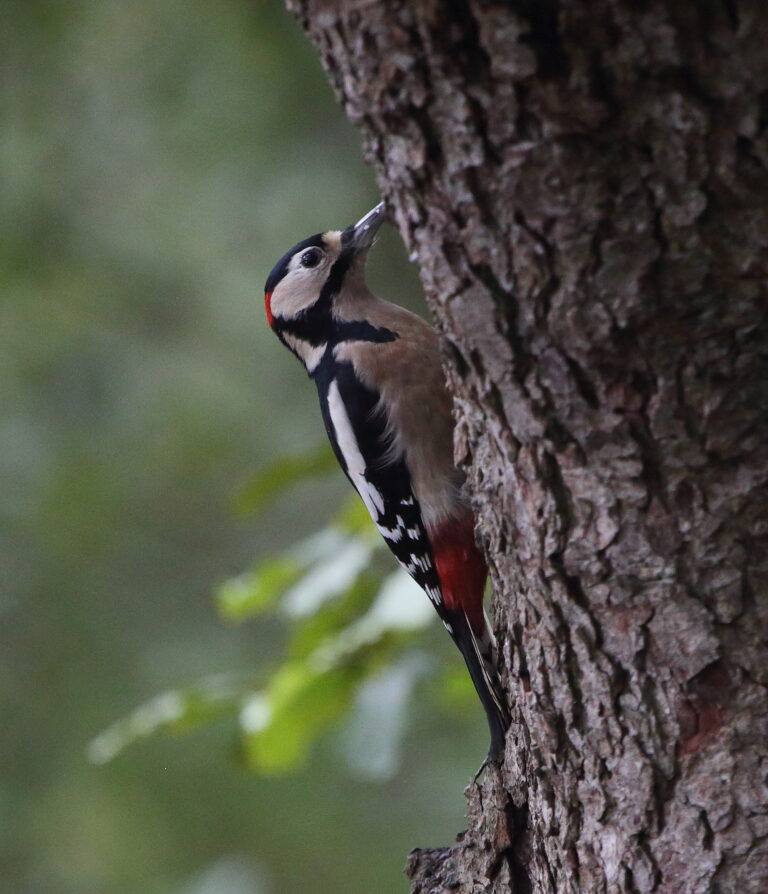 Today’s grim forecast demands a change of plan so we swerve the uplands and head north to the Hauxley nature reserve on the Northumberland coast. Despite the very blustery weather there are plenty of Tree Sparrows at the feeders on the car park with Shoveler, Curlew, Oystercatcher, Redshank, Turnstone and Dunlin around the lagoon. By lunch time a miraculous change in the weather brings blue sky and warm sunshine, while nearby Newcastle is flooded by heavy rain! This afternoon, a stroll to the beach produces a pair of Treecreepers, with plenty of new sightings offshore including Eiders, Kittiwakes, loads of Gannets and a pair of Red-breasted Mergansers. Along the beach, on the incoming tide, we also enjoy good views of more Turnstones, Redshanks and Dunlin, plus a couple of Bar-tailed Godwit and several busy Sanderling in their frosted winter plumage, while Rock Pipits pose on nearby rocks. A little way south the East Chevington lagoon adds Sparrowhawk, Pintail and an obliging male Stonechat to the growing list, followed by around 152 Pink-footed Geese at Druridge Pools (the flock flies off with a “wink wink”, leaving just two on the pool). We end the day here with a family of Shelduck and a fine show by a female Marsh Harrier flushing dozens of Teal, a Grey Plover and a Spotted Redshank, making a total of thirty new birds today, and on the drive south we run into the awful wet weather again.
What a difference a day makes with glorious warm sunshine all day today, ideal for a trip to the picturesque North Pennines, and by 10.40 we have our number one target bird for the day sighted, with a group of ten male Black Grouse showing a navy blue sheen in the sunshine while feeding quietly in a sheep field. A short way further on we find another five, hunkered down in long grass not far from the road. Next sighting is an unexpected bonus; a beautiful Barn Owl, sitting on a fence post beside the road, as if enjoying a snooze in the sunshine after yesterday’s washout, and completely unphased by our presence. As we admire the owl, a mixed flight of half a dozen or so cock and hen Black Grouse drops into the rough grass just behind it. Further on, the same roadside also produces close views of a few Red Grouse, which are markedly smaller than the rufous brown Black Grouse hens. At the end of the road to the Cow Green Reservoir, the desolate treeless landscape is reminiscent of parts of Iceland, and so a flock of recently arrived Pink-feet looks quite at home here. On the way back down the road, the Barn Owl is still ‘glued’ to its perch! 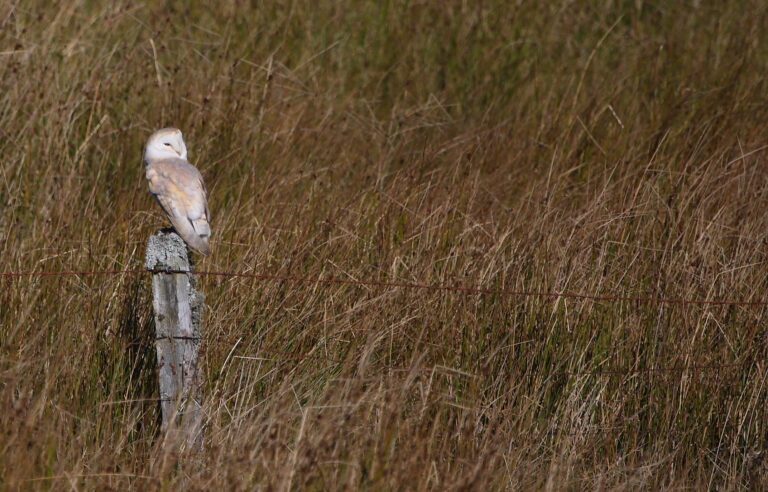 After a picnic lunch under a blue sky amid the glorious scenery, we walk the Pennine Way alongside the fast flowing River Tees, enjoying super scope views of both Dipper and Goosander, and almost stepping on a Brown Hare as it sits tight until the very last second, leaving the outline of its form compressed into the long grass in our path. Next we call at the High Force Hotel for an outdoor afternoon tea and scones, before another walk, this time to view the impressive power of the High Force waterfall in full spate after yesterday’s heavy rain. On the walk back from the falls, we enjoy a magical show as first one, and then a second ghostly Barn Owl bouyantly flies past us on silent wings, barely fifty yards from the footpath! That’s just six new birds today, but what quality. 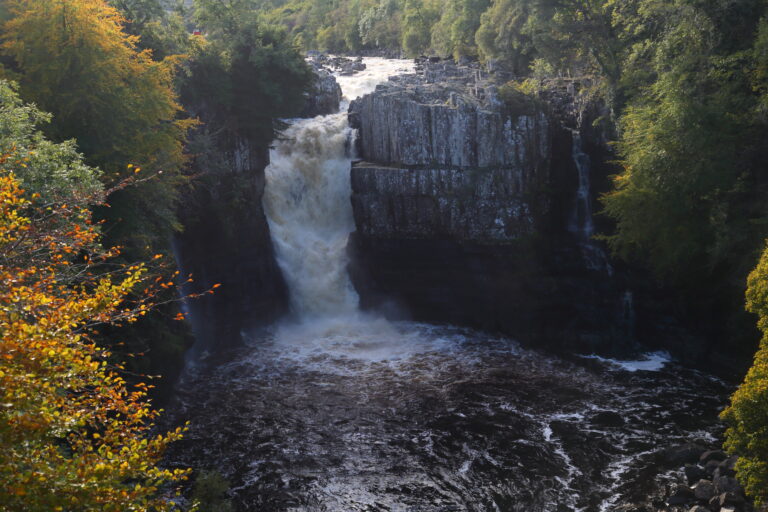 It’s another warm sunny day for our visit to the coast at Teesside, where we begin with a stroll at Seaton Common, home to a large flock of Goldfinches and a Brown Rat, all feeding on the path. A scan of the aptly named Seal Sands reveals a group of Grey Seals hauled out on the mud, with a couple engaged in a squabble with flying flippers. Along the shoreline of North Gare Sands, we find a few Sanderling and Bar-tailed Godwit among the crab eating Herring Gulls, while a Peregrine dashes above the distant dunes. The next sighting is utterly bizarre and almost incredible as a Quail (yes a Quail) breaks cover from a rocky bank on the shore and flies straight past us, showing its striped back, before disappearing into the dunes! From the tip of the North Gare Breakwater, a brief seawatch produces good views of male Eiders, Guillemots in winter plumage and a Red-throated Diver still in breeding plumage with its blood red throat. After lunch in the visitor centre we explore the nearby Saltholme RSPB reserve, where new sightings include a single Avocet, a couple of Green Sandpipers, two or three Little Egrets, a handful of Black-tailed Godwit, dozens of Barnacle Geese, hundreds of Golden Plovers and best of all, a female Merlin on a stick, showing really well for ages, while watching all the action, with an occasional bob of her head. That’s five raptors today. For the third day in a row, we also enjoy another vociferous flock of Pink-footed Geese as they warily descend to feed on the marsh. We end another productive day at nearby Cowpen Marsh, where the incoming tide floods the fields beside the Greatham Creek a mile inland, making a group of Common Seals look completely incongruous in such a terrestrial setting amid the barns and bushes!
It’s the last day of the trip and on the way home we call at the Blacktoft Sands RSPB reserve hoping to see the vagrant White-tailed Lapwing which arrived on 26th August, all the way from central Asia! There it is, right in front of the Xerox hide, and looking very elegant and relaxed in its new home, with a long bill and very long deep yellow legs, together with Snipe, Ruff and Black-tailed Godwit, until flushed by a passing Marsh Harrier; bad news for the next person to arrive, seconds after it went. Fortunately, this mega rarity resettles in front of the Marshland hide, giving more great views, and among all the Dunlin are two slightly larger, longer-billed Curlew Sandpipers, while a Water Rail and Bearded Tits feeding along the far side are an added bonus. During lunch here several skeins of Pink-footed Geese numbering around two thousand birds noisily pass over, making this bird a daily sighting over the past four days. By the end of the trip, the bird list total is 104 species, including stars like Red-throated Diver, Pink-footed Geese, Red and Black Grouse, Water Rail, Merlin, Barn Owl, Bearded Tit, the incredible Quail, and of course, the White-tailed Lapwing. 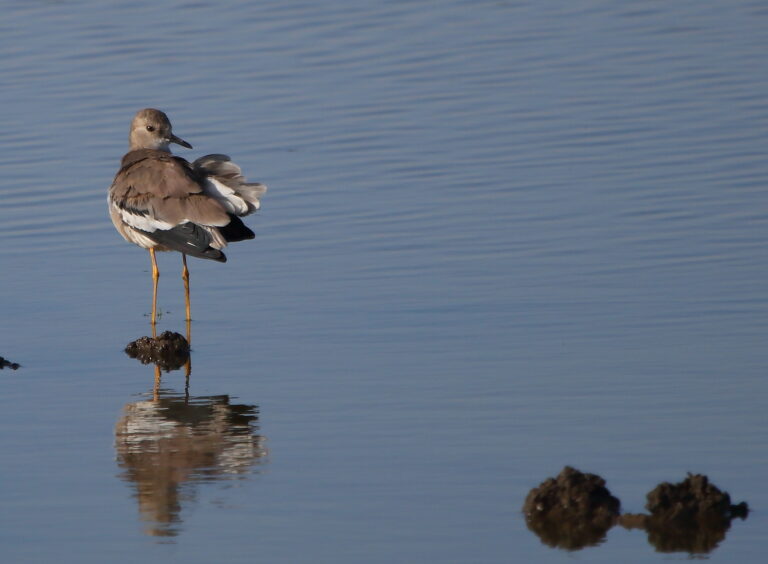