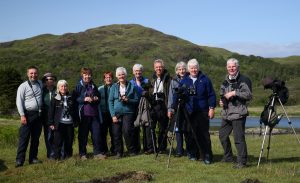 Approaching marvellous Mull on the ferry from Oban, the scenic Firth of Lorn was like a ‘mill pond’, and an ideal surface for spotting numerous rafts of Guillemots, as well as one or two Black Guillemots, Razorbills and Gannets.
This morning it was pouring down, and last evening’s lovely view across Craignure Bay and along the Sound of Mull was hidden by a thick shroud of mist. With such a dismal outlook, it seemed like a good idea to spend the morning inside the shelter of Duart Castle, which has ‘guarded’ the Sound of Mull since the thirteenth century! Just as Jim forecast, the rain had stopped by one o’clock and there was even a bright light up in the sky, bringing the local birds like Rock Pipit, Song Thrush and Greenfinch out of hiding. Moving on for an afternoon’s birding, just a few minutes from the castle, we scoped a magnificent adult White-tailed Eagle with a blonde head, a stonking yellow bill, and feet the size of a man’s hand, perching in the scope, close enough to see its talons! What a fantastic start. A preening Great Northern Diver gave super views of its intricate monochrome breeding plumage from Grass Point, while a singing Meadow Pipit repeatedly parachuted nearby. The picturesque ancient Oak woods near Loch Spelve then produced Tree Pipit, completing the trio of British breeding pipits seen in one day. Along the shore of the loch we found Ringed Plover, Common Sandpiper, Wheatear and Stonechat, and then another White-tailed Eagle landed on the not so distant skyline, with two Ravens ‘in tow’. A second eagle appeared on the skyline, and in the ensuing kerfuffle, one eagle flew by with the two Ravens ‘hot on its tail’, while the other eagle flew past with the remnants of a long dead sheep trailing below its talons! Once reunited, the two eagles then circled together before descending below the ridge. A calling Cuckoo sitting on a wire also showed here, while a couple of Common Seals watched us inquisitively as we watched the Cuckoo. The sudden appearance of a cloudless blue sky seemed like an ideal time for a group photo. That evening, it was still light enough for the birds to still be singing at 10.15pm!
Today we headed west on a scenic drive through spectacular Glen More and along the Ross of Mull, to Fionnphort on the western tip of the Ross, where the ferry took us across the sound to Iona, with passing Kittiwakes on the crossing. Once ashore, there were plenty of Rooks, Meadow Pipits and one or two Hooded Crows, but no sign of any calling Corncrakes until a single bird gave the unmistakable rasping “crex crex” from a patch of ‘rough’ behind the fire station. The sound gradually got closer and closer and then a head popped up twice, no more than ten yards ahead, and yet most of us missed the elusive bird, although Pete was lucky enough to catch sight of another Corncrake as it dashed across a patch of mown grass while the others were looking the other way! Apparently, it had been a poor year for these long distance migrants. A heavy, near horizontal squall put an end to the watch and we took refuge in the café for lunch. Around one o’clock the sun came out again and we watched fourteen wild Rock Doves sunbathing on a garden lawn! We returned along the Ross at a more leisurely pace, spotting Red-breasted Mergansers along the shore, but no Otters. We had afternoon tea in Pennyghael, along with House Martins and a tame Heron and finished the afternoon with another White-tailed Eagle soaring effortlessly across Glen More just as the weather closed in again.

It was a lovely calm sunny morning, ideal for our rescheduled cruise to the Treshnish Isles. On the way to Ulva Ferry we began with an ‘eagle fest’ on the shores of Loch na Keal where a pair of Golden Eagles showed off their golden manes against the rocky slopes, while soaring back and forth below Beinn Ghraig. Meanwhile, a White-tailed Eagle flew by over the adjacent sea loch, almost at eye level! With a boat to catch we moved on along the north shore of the loch where a pair of White-tails showed really well, with one flying so low that we could also see its shadow in the ‘bins’ as we tracked its flight path! The first landing of the cruise was on Staffa, with its spectacular basalt columns, guarding the entrance to Fingal’s Cave. The target bird here was the Twite and we soon got lucky, with two birds singing at close range to our ‘picnic site’, while a Great Skua also showed really well. Next stop was Lunga, where we ‘overdosed’ on Puffins as there were hundreds and hundreds of these loveable little auks literally waddling around our feet, providing a photographic feast. This fantastic little island, also had Rock Pipits, Wheatears, a pair of marauding Ravens, and even a calling Corncrake, as well as thousands of Guillemots, plus Razorbills, Kittiwakes, Fulmars and Shags, all at close range, creating a magical experience and some wonderful photo-opportunities. On the return journey we also enjoyed seeing Eiders, Common Terns and both Grey and Common Seals. We had been so lucky with the weather and yet by dinner time it was overcast and grey again with more drizzle.

Goldcrest was a ‘car park bird’ first thing this morning, followed by Ringed Plovers and Common Terns on a gravel island just offshore from Craignure golf course. Moving on to Salen Pier, I said that “if we get out quietly, we might see an Otter”. Sure enough, minutes after spotting a couple of smart male Siskins on top of a shrub, we spotted an Otter feeding a fair way offshore. As we watched it repeatedly dive and resurface, it gradually got closer and closer, and soon we could clearly see its whiskers and teeth as it munched away on several slender Butterfish. Its final catch was a hefty eel and I quickly realized that with such a large fish, it would have to bring it ashore, and so I sprinted back to the vehicle for the camera. By the time I got back to the scene, the Otter had hauled the eel well up the shore, where it proceeded to gnaw at the head of the writhing eel, which was as long as the Otter! It was clearly well aware of our presence, but as we all remained calm and quiet, it was so intent on its meal that we were able to watch, photograph and video the ‘wrestling match’, which went on for over half an hour, at a distance of just fifteen feet according to my camera lens! This was a most remarkable ‘once in a lifetime’ wildlife encounter, akin to a Springwatch clip, but ‘in the flesh’, and we could not believe our luck as we walked away, leaving the Otter to continue feasting on its prize catch in private! 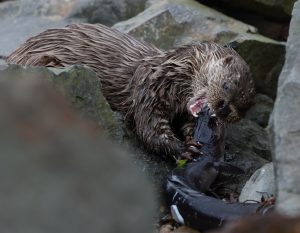 We arrived at colourful Tobermory in time for lunch and then headed west on a scenic winding single track road, scoping a singing male Whinchat along the way, along with Eider ducks trailing tiny ‘clockwork’ ducklings at picturesque Calgary Bay. By late afternoon, it was time for a ‘Sea Eagle Adventure’ departing from Ulva Ferry, but with so much cloud and rain, I was sceptical that it would be worthwhile at all. I was wrong! The boat motored into Loch na Keal, where we sat and waited, and as the rain eased, the large outline of a White-tailed Eagle approached and circled the boat. As the skipper threw out a fish, the eagle tilted its course and locked in on its target like a Second World War dive bomber, before swooping down with outstretched talons, a ‘fish’s throw’ from the boat! Wow! As the skipper knows all the local eagles, this was the male from the north shore, and while he was away, the neighbouring male from the southern shore territory repeated the awesome spectacle! The adventure continued with an encore by both males, and on the way back to base, we were intercepted by the female from Ulva, which also made a swooping pass alongside the boat. With ‘grandstand views’ of ‘our’ Otter and several White-tailed Eagles, this was a day to remember, and a fitting finale to our visit to ‘Marvellous Mull’. 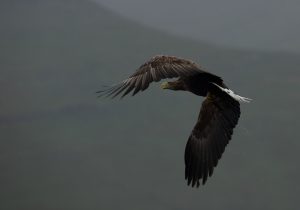 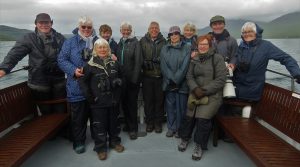