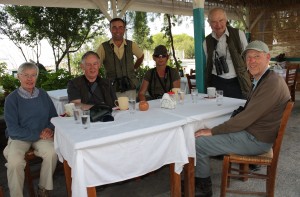 It’s cool and breezy at Mytilene airport with a black sky over ‘Bill’s Mother’s’, but the Hooded Crow shows we’re not ‘at home’. Once installed in the Malemi Hotel, a stroll along the beach produces Crested Larks and a Tawny Pipit. Further on at the mouth of the Tsiknias river, we find Squacco Heron and Common, Sandwich and Little Terns, alongside Yellow-legged and Slender-billed Gulls. On the way back, the green fields are swarming with hundreds of Spanish Sparrows and one or two Corn Buntings are singing despite the strong breeze. Back at the beach bar, the flooded car park has attracted two Wood Sandpipers and a darker stockier Green Sandpiper, allowing a fieldguide-style comparison of these two Tringas in the scopes. Not a bad result for a short stroll.

To avoid the Easter Sunday ‘crowds’ we head west, but within five minutes of leaving the hotel, we have to stop by the Christou river to watch two pairs of Red-footed Falcons hovering over a couple of Black Storks. Further west, at the small chapel of Agios Ioannis we find the first of many Black-eared Wheatears, including dark and pale-throated forms, all looking dazzlingly bright with barely a hint of apricot, while the dark shape of a Blue Rock Thrush breaks the skyline above the chapel. Moving southwest on the Apothika road, we find Red-rumped Swallows nesting under a bridge and then at Makara a seawatch produces plenty of Yelkouan Shearwaters way offshore. Beyond the ford at Makara the ‘road’ is more challenging but rewards us with good views of Short-toed Eagle, Long-legged Buzzard, Crag Martin, Whinchat, Sombre Tit and Rock Nuthatch. With no Chukars in the bag we stop for lunch, but before we can sit down to eat, we find ourselves in the middle of a ‘Bunting fest”, with Cretzchmar’s, Cinereous and Cirl Buntings all scoped while singing in different directions within 100 yards of the same spot! Add to this another Sombre Tit, a fly by Short-toed Eagle, a pair of Black-eared Wheatears posing on a fence and a Rock Nuthatch delivering food to its ‘bottle neck’ nest stuck to a nearby rock face and you have the perfect ingredients for Sunday lunch. With the fuel gauge now teetering between ¼ and empty, with intermittent appearances by the amber low fuel warning light, we play safe and head back to base for afternoon tea, followed by some ‘doorstep’ birding outside the local school, where we have a Scops Owl snoozing in a tree on one side of the road and two Long-eared Owls in the tree on the opposite side! The village also produces a black-capped Jay and a White Stork on a nest on the church roof.  With a little more time to spare before dinner we opt for a drive along the Tsiknias river, which is swarming with Swallows, Sand Martins, Little Egrets and Wood Sandpipers, as well as a few Ruff and Little Ringed Plovers. Next we pinpoint a Nightingale singing from a bush on the opposite bank and even find a statuesque Great Bittern, looking a little lost amongst the short green vegetation. While scoping the Great Bittern a pair of Little Bitterns pop out just a few yards along the same ‘beat’, giving even better views in the early evening sun! Incredibly, a Stone Curlew then breaks cover from the river bed. Where else could you see Bittern and Stone Curlew from the same spot? Just downstream we enjoy stunning views of another Stone Curlew out on the pebbles, with its big yellow eye glinting in the evening sunshine, followed by Purple Heron. What an amazing day. Try picking a star bird out of that lot!

This morning we head north on a scenic drive through a beautiful landscape of wooded green hills to Petra, where the sea is a gorgeous blue colour. We spot a couple of Dolphins porpoising offshore and then stake out a site for Rüppell’s Warbler. This stunning Warbler eventually shows well along with Subalpine Warbler, and at one stage Mr. Rüppell chases the ‘Subalp’ towards us. Meanwhile a Turtle Dove is cooing from a wire above our heads and after a display flight it departs with a partner in tow. A Hoopoe and a superb posing male Whinchat are other star sightings here. Moving on we explore the north coast between Molyvos and Skala Sikiminias, which runs parallel with the Turkish coast barely five miles across the strait. A stroll through the flower-filled Olive groves reveals a Middle Spotted Woodpecker with a vibrant shiny red Punk-style hairdo. Returning south via the Napi Valley the first Bee-eaters of the trip pass overhead and we strike gold with a tree full of nine Golden Orioles just sitting there in the scope, along with another Middle Spotted Woodpecker! What an amazing find. Back at the Tsiknias river, still awash with Wood Sandpipers, we end the day with seven Red-footed Falcons chasing around, before lining up along a telegraph wire.

Our main target today is Krüper’s Nuthatch, but we start with a drive along the Tsiknias river, finding Great Reed and Olivaceous Warblers, Little Bittern and four Night Herons, with eyes as red as cherry tomatoes glinting in the sunshine. At the Achladeri picnic site we get good views of a singing Wood Warbler as soon as we arrive, followed by singing Serins and Short-toed Treecreepers, but no sign of the Nuthatch apart from a likely looking nest hole in a dead tree. There is only so long one can scope a hole in a piece of wood and so we move on to another site deeper into the pine forest, but again no luck, so we go for some ‘easy birding’ back at the salt pans. Amongst the hundreds of Flamingos, Avocets and Black-winged Stilts, we find seven Black-tailed Godwits coming in to breeding plumage, and a group of twenty-six Gull-billed Terns. Next we explore the wetland between the pans and the shoreline and in no time at all, we have a ‘festival of birds’ right in front of us; there are loads of Red-throated Pipits and Short-toed Larks feeding in the short turf close by in the same scope view as blue- and black-headed races of Yellow Wagtail, while a sharp-eyed Little Owl watches us from a nearby fence post. Meanwhile a shallow pool offers up Ringed and Kentish Plovers, Ruff, and a rusty Curlew Sandpiper, and among all the Little Stints we spot a darker looking Broad-billed Sandpiper. Beyond the pool we count twenty-six Ruddy Shelduck, six White-winged Terns, two white Storks, a Little Tern and a Great White Egret, with a Marsh Harrier on patrol. On the way back to base, we find three Mediterranean Gulls among the Sandwich and Common Terns, rounding off another good day.

Today we head way out west on a scenic winding road, serenaded along the route by Nightingales in the bushier sections. First stop is the Lardia valley, a rocky gorge where we scope Blue Rock Thrush and eventually Rock Sparrow, showing just a hint of yellow on the throat. Next stop is for Isabelline Wheatear which is waiting obligingly by the roadside west of Andisa. It’s mid morning by the time we reach the spectacular Ipsilou monastery, perched on a crag, with Alpine Swifts above and a family of Ravens on the rocks below. We scope a Woodlark singing from a roadside wire while a stroll down from the monastery brings us to within twenty yards of a Cinereous Bunting singing from a tree top! By now the absence of Chukars is a serious issue and despite a thorough search of the dry rocky landscape around the petrified forest, we remain ‘Chukar-less’, though a passing Eleanora’s Falcon and a perched Long-legged Buzzard are some consolation. Our arrival at the coast north of Sigri coincides with a large movement of Hirundines and a ‘fall’ of Spotted Flycatchers and Yellow Wagtails, but the stars of the show are a pair of Masked Shrikes building the foundations of a nest which they glue together with their own saliva! On the way back to ‘civilisation’ we stop off at the ‘Scops copse’ and immediately find this small incredibly well camouflaged owl dozing in a photogenic location.

It’s ‘Operation Krüper’s Nuthatch’ this morning and within five minutes of staking out the nest hole, we have both birds in our scopes, clinging to the tree in that classic upside down nuthatch pose! What amazingly lucky timing. Our next visit is to the ‘Crake Lake’ near Metochi and again we are in luck. First a male Little Crake shows out in the open, and then a female, followed a little later by a second female, and eventually we have a full scope view of another female Little Crake preening within fifteen yards of us! After this it’s ‘business as usual’; Common Buzzard mobbing a Short-toed Eagle, male Masked Shrike posing on a tree top, male Little Bittern showing well in a ditch, loads of Black-winged Stilts, Avocets and Flamingos, more Short-toed Larks, Yellow Wagtails, Red-throated Pipits, Woodchat Shrikes and Corn Buntings, a ‘fall’ of Whinchats, and on the way back to the hotel, along the Tsiknias river, another Little Crake showing really well!

It’s our last day in the field and we are still missing a few ‘dry country’ birds like Chukar, Rufous Bush Robin and Black-headed Bunting, so we opt to head west again, but by a new route. Despite an exhaustive search of every dry rocky slope between Agra and the Meladia Valley, we are still ‘Chukar-less’ by noon, although we do get good views of Long-legged Buzzard, Little Owl and Blue Rock Thrush sitting on roadside rocks. The first new bird of the day comes just before lunch time; a stunning Black-headed Bunting on a roadside wire, and then like buses, a couple more arrive after a long wait. After lunch, we hit a ‘purple patch’, starting with good views of Eastern Orphean Warbler, and then moments later, a Chukar sitting on a dry stone wall right by the road! Hooray, at last we have found the ‘needle in the haystack’! Barely ten minutes after I finish punching the air with a sense of relieved delight, we find a Lesser Grey Shrike singing in a fig tree, followed by a couple of Tawny Pipits on the track straight ahead of us, and so we end the last day with seven new birds for the trip list, making a total of 127 including many top quality sightings. What a fabulous island Lesvos is. 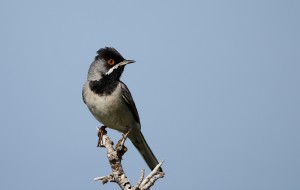