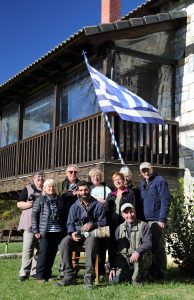 We begin with bright sunshine, a cloudless blue sky and a dusting of snow on the highest peaks in nearby Bulgaria. Just ten minutes from the hotel, we are gazing out over the wide expanse of Lake Kerkini which is covered with thousands of birds, with a preponderance of rosy honking Greater Flamingos, along with huge rafts of Pochards and the biggest congregation of Cormorants I have ever seen. In the foreground there are plenty of Avocets, Teal, and Dalmatian Pelicans in need of a Persil wash, amongst which are a few Pintail, four Spotted Redshanks, a Black-winged Stilt and a Caspian Gull with a longer slimmer beak than the numerous Yellow-legged Gulls. A wider scan produces a tight group of Spoonbills, a scattering of Great White Egrets, a flock of almost one hundred Lesser Whitefronts and a Spotted Eagle, sitting far too far away to show its round nostrils! Meanwhile a hen Hen Harrier quarters the adjacent stubble, two late Swallows fly by and a bushy-tailed Wild Cat saunters nonchalantly along the track, just a couple of hundred yards away, while we all take turns to admire it in the scope. Moving on we have to stop for a trio of soaring Spotted Eagles, two of which are so close together that we can see them in the same view before they tussle with grappling talons. One of them is the rarer pale brown fulvescens race. Next sighting is a female Syrian Woodpecker, showing its diagnostic face pattern in the scope as it hammers away at a Poplar branch. Further along the same track a small pool has attracted a couple of Greenshanks, two Snipe with lovely reflections, a Squacco Heron, a Kingfisher, plenty of Pygmy Cormorants and a Coypu, reminiscent of a scaled down Beaver, while six Black Storks circle overhead.
It’s now time for a picnic lunch in the foothills which mark the Bulgarian border with this northern corner of Greece, but our meal is quickly interrupted by flighty Hawfinches and our main target here, a soaring Golden Eagle, which is at least three times the size of the mobbing Buzzard. After lunch, a short stroll soon produces a superbly photogenic male Cirl Bunting posing at little more than ten yards! Next two Golden Eagles soar along the ridge, while Rock Bunting and several Black Redstarts are added to the growing list. Back at our picnic site, a likely looking dead tree has attracted a gathering of twenty six Hawfinches! On the way back to the village we drive ‘off piste’ for close views of Corn Buntings, Tree Sparrow and Great Grey Shrike, while a floating ghostly-grey Hen Harrier makes a fitting finale to this ‘Halloween party’.
It’s another lovely sunny day, but only 4°C first thing as we head for the western side of the lake, where we find another upstanding Caspian Gull and a single smart White Pelican, alongside several scruffy looking Dalmatians, amidst thousands of Cormorants. The bushes here seem to be alive with Chiffchaffs, while a Crested Lark sings from a nearby rock and another smart male Cirl Bunting forages at close range along with his partner. Along the shoreline we also find a line of thirty two Snipe and two Water Pipits, while hundreds of Flamingos make a spectacular flyby.

With a mirror-like lake surface, conditions are perfect for a boat trip, which even the poorest of sailors can stomach. On the way out of the harbour, Great White Egret and Kingfisher show really well at close range, as the boat acts as a mobile hide. Further out, we find several elegant Black-necked Grebes, and in the brilliant light the thousands of Flamingos appear to be supported by bright pink ‘stilts’. Suddenly, the engine splutters as we run aground in this shallow lake, even though we are far from the shore. Out come the punts, and after a lot of leverage, we eventually work ourselves free of the silty bottom. Meanwhile, wave after wave of Pochards in their hundreds are coming in across the line of mountains separating us from Bulgaria to the north. 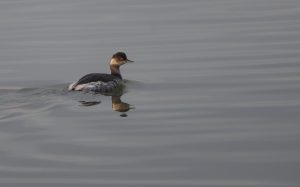 After lunch in the sunshine beside the lake a drive along the eastern dike soon brings us to yet another Wild Cat, which wanders off the track to enjoy a sunny spot within ten yards of the vehicle! Further on, we find three Wigeon and two Ferruginous Ducks in a raft of ‘a thousand and one’ Pochards. Hawfinch and Black Wodpecker round off a ‘quiet afternoon’, until we are pulled over by a mobile Police check asking for ID, which is safely back at the hotel! Fortunately, the policeman realises that our group contains several “nice ladies” and waves us on, whereas had he seen my passport photo, he would have undoubtedly detained me, as my photo looks like a terrorist from a wanted poster!
There is a light frost in the meadows this crisp bright morning, with an atmospheric mist across the lake, which is again covered with thousands of birds, creating evocative reflections in the tranquil surface of the water. There is so much to see here, and from one point alone we spot a handsome male Merlin sitting on a low perch, a huge White-tailed Eagle flapping slowly across the distant tree tops, plus Black and Green Woodpeckers, while a Lesser Spot calls repeatedly nearby. Moving on, a small lagoon has attracted a couple of Greenshank, several Snipe, flushed by a passing Sparrowhawk, plus nine Green Sandpipers and a pair of Bewick’s Swans, while numerous Dalmatian Pelicans fish co-operatively, and the Squacco Heron and Kingfisher are still present. During a mid morning loo stop we hear another Lesser Spotted Woodpecker, and eventually pinpoint this red-capped male in the scope. With three different woodpeckers already ‘in the bag’ this morning we head for the narrow wooded river which forms the border with Bulgaria, just ten yards further north. The towering White Poplars, tinted with Autumn gold and dropping a constant shower of gently falling leaves, soon produce a vocal Syrian Woodpecker, followed five minutes later by Grey-headed Woodpecker. From the same spot, a male Black Woodpecker appears, and then his partner, with less red on the head also shows up, and within ten minutes we are scoping a Middle Spotted Woodpecker in the same tree! This ‘woodpecker heaven’ also produces Nuthatch, Marsh Tit and Short-toed Treecreeper.
After lunch in a taverna we explore the beautiful rocky landscape near Sidirokastro, where target birds include Rock Nuthatch and Blue Rock Thrush. We soon find Black Redstart, and then a pair of smart Rock Nuthatches obligingly perform a bowing display from the same rock. Up on the ramparts, a Rock Sparrow shows well, while a female Blue Rock Thrush makes a brief appearance. Back in the town, the male Blue Rock Thrush is far more confiding, sitting quietly enjoying the sunshine on a ledge above the river where we also enjoy great views of two Grey Wagtails and a Dipper. Back in our village we spot a Little Owl on a rooftop, starring at us with piercing yellow eyes, as the sunshine gives way to dusk, making an enviable total of 73 bird species seen today, including many from the ‘top drawer’. 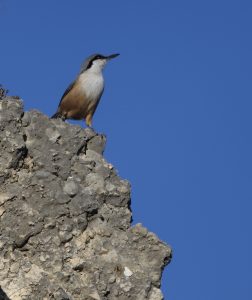 It’s cloudy for our last day in the field as we leave Lake Kerkini National Park and head south for the salt marshes near Thessaloniki, where Kestrel is bird number one hundred on our list, followed by a steady stream of new sightings including Little Egret, Shelduck, Grey and Golden Plovers, Ruff, Little Stint, Sandwich Tern, Mediterranean Gull, bright Yellow Wagtails, Reed Bunting, and even Red-throated Diver and Red-necked Grebe, which are local rarities. We also enjoy plum views of numerous Kingfishers and Water Pipits, while the target Slender-billed Gull remains unseen until late in the day, when just one shows really well in the late afternoon sunlight. This brings the trip list to 119 sightings, just one short of the Autumn 2015 total, but our local guide George has one last trick up his sleeve; not one but two Long-eared Owls, watching us in silence from their daytime roost in the local cemetery, making a fitting finale to a very productive short break with lots of superb sightings of top quality birds, including two species of Pelican, three types of Eagle, four Grebes, five Buntings, six Corvids and seven different Woodpeckers! Well done George. 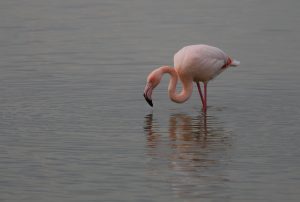