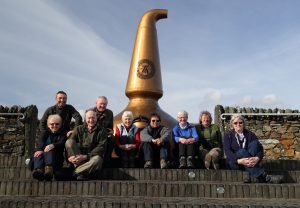 After a 340 mile twelve hour journey, via three ‘smooth as silk’ ferry crossings, we land on Islay under a clear starry sky, dominated by Orion the Hunter. Next morning the sky is blue, with puffy white clouds, and the Sound of Islay is unruffled by any breeze as we take the five minute 9.30am ferry across to Jura, with several Black Guillemots showing very well on the way. Our main goal on Jura is to see at least one Otter, and as we scour the first stretch of coastline alongside the road, Steve exclaims “There’s an Otter”, ahead and swimming toward the shore. By the time we are out of the van and in position on a vantage point, the Otter is ashore and curled up on a rock for a snooze, where it blends in perfectly with the brown seaweed, while we watch through the scope. So, mission accomplished by 10.15! Moving on, the single track A846 cuts inland, and we turn our attention to the high ground, in the hope of an eagle. We are not disappointed, as a very large ‘buzzard’ circles above the skyline, with a wingspan wider than the length of the Red Deer below it, and close enough to show its golden nape gleaming in the sunshine! Further on, another scan of the hill tops reveals a second more distant Golden Eagle, this time, sitting on the skyline while being mobbed by a couple of Ravens, which after a number of dive bombs eventually move the eagle on.

It’s midday by the time we reach tiny Craighouse, the ‘capital’ of Jura, in an idyllic setting below the Paps of Jura with their light dusting of snow reflecting in the sundrenched smooth-as-glass bay, perfect for picking out so many Great Northern Divers that we quickly lose count! Amongst all the divers, there are also plenty of Shags and Red-breasted Mergansers, a raft of Eiders, a couple of Red-throated Divers and several sunbathing Common Seals, plus another Otter, swimming purposefully across the bay and then diving repeatedly, and surfacing each time with fresh fish for lunch, while we enjoy our own seaside picnic in the warm sunshine. Further up the ‘main road’, our Otter resurfaces closer in, and in the scope we can clearly see its teeth as it munches its way through fish after fish. Once the road leaves the shore we’re into a moorland landscape where a couple of ringtail Hen Harriers are making the most of the fine flying weather by soaring on thermals, just like the many Buzzards on this wild island. No sooner than they have drifted off over the skyline, a pair appears in the opposite direction, this time in a diving display as if spring is in the air. On the drive back along the one and only road on the island, we enjoy even closer views of first one, and then a second hen Hen Harrier, in their characteristic low level quartering flights. Back at the Sound of Islay, a Grey Seal pokes out its large nose and at least five cavorting Bottle-nose Dolphins make a big splash each time they leap clear of the water; a wonderful finale to a great day.

It’s another glorious sunny day this morning, and nearby Loch Indaal is as calm as a mill pond, ideal for spotting more Great Northern Divers, Eiders, Goldeneye and Red-breasted Mergansers, as well as Common Scoters which are new for the trip. From here, we head for the southernmost tip of Islay, where the rugged Oa peninsula offers a panoramic view across the sea to the coast of Northern Island. From the clifftops, we spot Rock Doves, Rock Pipits, magnificent Wild Goats, with long shaggy brown or white coats and impressive long curved horns, and a Golden Eagle soaring above the next headland, while a second eagle sitting on the skyline looks massive in the scope, even though it must be well over a mile away! From the Mull of Oa headland, we watch Fulmars circle below, while an occasional Gannet sails by, and a Raven watches us from the top of the stone monument commemorating the sinking of two American ships during the Great War. On the way back down to the van, a stubble field is alive with at least fifty twangy Twite, showing really well in the scope each time they line up on one of the fence wires. After lunch in the sunshine at the Ardbeg distillery, we visit Kildalton church with its 1300 year old carved standing stone cross, where we also find Fallow Deer and a very confiding Treecreeper. A final stroll along the shore of Kilnaughton Bay produces fantastic views of another four Great Northern Divers remarkably close in and unfazed by our presence, as well as more Wild Goats, this time with cuddly little kids. On the drive back to the hotel we have to stop for a large flock of Barnacle Geese grazing a roadside field, and as we estimate anything up to four thousand of these handsome geese, a male Merlin dashes across the field and away at breakneck speed. Back at Loch Indaal, within earshot of our hotel, skeins of Barnacle Geese arrive on the sandflats and make a bee line for the ‘wee burn for a drink, and so the scope is choc-a-bloc with geese.

Out comes the coat this morning, for the first time on this trip, as the forecast of wind and rain has come true, creating challenging conditions for seawatching along the north shore of Loch Indaal, but we still manage to find four pale-bellied Brent Geese, surfing just offshore. The hides on the Loch Gruinart RSPB reserve offer some shelter from the elements, as well as new birds like Whooper Swans, Shoveller, Gadwall, Pintail, Tufted Duck and a Greenshank, along with great views of a female Hen Harrier battling against the wind right in front of the hide. After lunch in the visitor centre, it’s time for ‘Operation Chough’, as we can’t leave Islay without seeing these special Corvids, but the 50 mile an hour wind is not conducive to our planned walk around Ardnave Point. While thinking about Plan B, a Chough-like bird appears above the dunes and settles in their lee, before disappearing over the top, and so we pile out of the van for a very short sortie in the hope of finding ‘our Chough’. Walking into the wind is a real struggle, particularly as our faces are being pelted by stinging horizontal rain, but we soldier on up the gentle slope until a group of seven Choughs comes into view resting on the short turf down below our vantage point. Unable to stand up straight, never mind hold the binoculars still, resistance is futile despite our devotion to duty, and once my hat goes, I can’t stop laughing at the chaotic scene of a group of birders being buffeted and blown in all directions by the wind, while one of us races after the gambolling hat! With the Choughs ‘in the bag’ we retreat back to the van, crunching sand between our teeth, and with the wind behind us it takes no time at all; a brief but memorable adventure and such a remarkable contrast to the calm fine weather on the previous two days. Back at Gruinart Flats, we have to stop for an excitable flock of around 800 Golden Plovers, which obligingly land adjacent to the road, giving nice scope views, with some of them already in full breeding plumage, with black bellies and bright gold-spangled backs.
It’s another wet and windy morning, so we begin with a stroll in the shelter of the woods next to the hotel, which are carpeted with Snowdrops, complementing the frosted plumage of a leucistic Barnacle Goose, which is just one amongst a thousand grazing the adjacent meadow, and so a very lucky find! Meanwhile the swollen river is too wet for Dippers! After elevenses back at the hotel, a drive along the shore of Loch Indaal produces close views of several more Brents and plenty more White-fronted Geese. After a pub lunch in the warm and cosy Port Charlotte Hotel, we head across country, with super views of a quartering male Hen Harrier along the way. A snowy-white first winter Glaucous Gull, resting on the long sandy beach at Machir Bay, is another lucky find. From the beach we return via the dunes, where a flock of around 36 Choughs, probing the short turf with their curved red bills, allows a detailed observation in the scope, making up for yesterday’s brief view. On the way back to the hotel, a couple of Roe Deer bring our mammal list to ten species, on top of 86 different birds, including many from the ‘top drawer’. 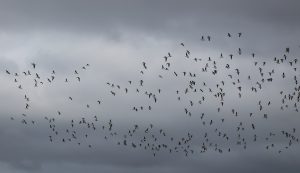