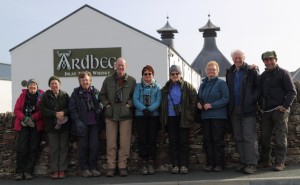 From ‘glamorous Glasgow’ it takes three ferries to get to isolated Islay, via the Firth of Clyde, Loch Fyne and the Sound of Jura, with a further ferry across the narrow Sound of Islay, to reach even wilder Jura, but on this Monday morning the mobile library takes up too much space on the small Jura ferry and so numerous Black Guillemots, most in summer plumage, provide entertainment until the ferry returns. “Dolphins!” Just as we board the ferry, a pod of at least nine dolphins in tight formation porpoises towards the ferry at full speed until almost alongside, before disappearing equally as quickly. Once ashore, our mission on Jura is to see an Otter, and within a mile of the landing ramp we spot two of these iconic Scottish islanders, fishing just offshore! The nearer one repeatedly dives and surfaces just a few yards out and level with the vehicle, which provides a screen, while we all quietly disembark to watch the Otter, which continues to surface with eel-like prey for at least thirty minutes, unphased by its audience, just thirty yards away! Mission accomplished, maintaining my 100% success rate, over five visits to this fantastic island! The island’s only ‘main road’, the A846, a typical country lane with grass sprouting from the centre along certain stretches, bypasses the steeply sloping Paps of Jura, where we spot numerous Red Deer, and a Golden Eagle soaring majestically above the rocky ridges. Even at such a distance, the spread-eagled outline is indisputable, and as it regularly folds its deeply-fingered wings, it swoops into a dramatic flight display, accompanied by its partner. By lunchtime, the temperature has reached 13°C, and we enjoy a picnic in the sunshine, along with great views of a massive Great Northern Diver, fishing in the calm water of the bay. During an exciting day here, raptor sightings include numerous Buzzards, the pair of Golden Eagles, a female Hen Harrier and a dashing Merlin. 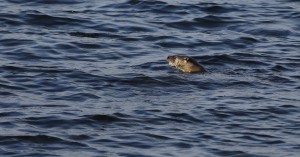 It’s really windy this morning as we follow the south shore of Loch Indaal, seawatching along the way, with good views of Red-throated and Great Northern Divers, Eiders, Red-breasted Mergansers, Wigeon, Goldeneye, a female Long-tailed Duck close inshore, eating a small flatfish with her steel-grey bill, and stunning views of smart drake Common Scoters, with jet black plumage and vivid orange bills, although some struggle to nail the regularly diving Slavonian Grebe. After sheltering in Bowmore from the wind-blown drizzle we head south to Port Ellen and then east along the ‘distillery trail’, where we find plenty of Common Seals reclining on the rocks in one of the sheltered bays. Further east, Kildalton church with its 1300 year old carved standing stone cross provides a photo-opportunity and we also come across Red and Fallow Deer here. After lunch and a group photo at the Ardbeg distillery, the ghostly grey figure of a cock Hen Harrier shows really well while hunting alongside the road across the Oa peninsula. By now the sky is blue and we enjoy a cliff top walk along the spectacular Mull of Oa, home to Fulmars, Rock Pipit and a flock of Wild Goats with long shaggy coats in a variety of colours, and impressive long curving horns, while a steady trickle of Gannets stream northward. The climax of the walk is a lively flock of around two hundred vociferous Twite, which obligingly perch in tightly packed rows along the wire fence right in front of us; a real highlight which even trumps the exciting Hen Harrier! 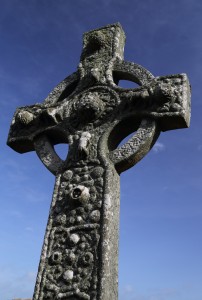 It’s breezy again this morning as we follow the northern shore of Loch Indaal, where we find six pale-bellied Brent Geese, all the way from Arctic Canada, as well as a handsome drake Long-tailed Duck in the same view as yet another Great Northern Diver. Moving on to Loch Gruinart, the feeders produce a Coal Tit for the list, the small wood offers a Treecreeper, posing at point blank range, while a scan of the wetlands adds Greenshank, Whooper, Pintail, Shoveler, Teal, and amongst them a vagrant Green-winged Teal, possibly brought here by Storm Doris! Just as we settle down in the second hide, all the wildfowl erupt and scarper in all directions as a ‘barn door’ flies past the front of the hide barely fifty yards in front of us at head height! As we watch in gobsmacked amazement, the eagle has landed not far from the hide, whereupon all eyes are trained on this awesome juvenile White-tailed Eagle, which is now looking around as if wondering what to do next. After fantastic scope views it flaps a little further before landing on a Barnacle Goose, which it proceeds to pluck and strip to the bare bones, which are subsequently picked clean by a Raven and Hooded Crows, which had been waiting patiently in the wings. Where’s a wildlife cameraman like Simon King when you need one to capture this remarkable footage? Ironically, he’s having lunch back at the Visitor Centre!

This afternoon we visit Ardnave Point, where we see all six British Corvids; Raven, Rook, Hooded and Carrion Crows, Jackdaw and Chough, with Carrion Crow being the most unusual here! Other sightings include several more Great Northern Divers and Black Guillemots, wild Rock Doves, a flock of Sanderlings, Brown Hares, which are really common on Islay, and around one hundred Common and Grey Seals hauled out on Nave Island. By now we have also seen numerous flocks of White-fronted and Barnacle Geese, amounting to many thousands of these noisy winter visitors. 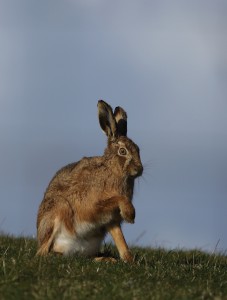 We begin our last full day on Islay wandering among “a host of golden daffodils” in the shelter of Bridgend Woods, with good views of Grey Wagtail and Dipper along the River Sorn, as well as Goldcrest, Long-tailed Tit and Treecreeper in the woods. With the weather improving, we scour the rocky shoreline in front of the Bruichladdich distillery, hoping to find Purple Sandpiper, eventually finding four of these neatly patterned but well camouflaged visitors from Iceland. In the scope, their legs mimic the mustard colour of the seaweed ‘bladders’ in which they forage. After a nice lunch in the cosy Port Charlotte Hotel, we enjoy scope views of two more Great Northern Divers, not far out from the jetty and then see another male Hen Harrier tacking to and fro in the strong wind. Alighting from the van at the sweeping sands of Machir Bay, battered by raging surf, powered by momentum from across the Atlantic, vocal Choughs bounce playfully on the turbulent air, while the 3°C cold front briefly lashes us with sleet.

Our day of departure is a complete wash out, with persistent heavy rain all day, and so a good time to return home and reflect on plenty of special moments, like the lively dolphins, the close views of the confiding Otter, the displaying Golden Eagle, the marvellous views of all those Great Northern Divers, the hunting Hen Harriers, the thousands of White-fronted and Barnacle Geese, the flock of Twite lined up in rows at point blank range, the raging surf crashing into Machir Bay, and of course the remarkable action with that awesome White-tailed Eagle. 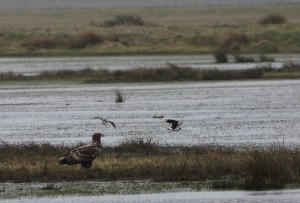