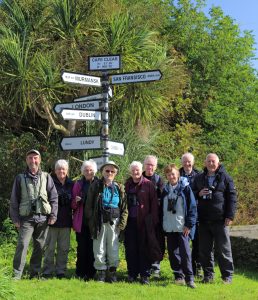 After a smooth crossing from Fishguard to Rosslare, spotting Gannets and Manx Shearwaters along the way, we check in to Whitford House, Wexford’s number one hotel. Nearby Tacumshin has a legendary reputation for attracting vagrant waders from North America, where recent reports included Buff-breasted, Semi-palmated and Baird’s Sandpipers for us to look out for on day one in Ireland. Our first stop here produces a female Sparrowhawk and a Peregrine, both posing on posts, with a second Peregrine floating around above us. Out on the lake, numerous waterbirds include Little Egrets, Mute Swans, Mallard, Gadwall, Wigeon, Teal, Shoveller, Shelduck and a single Pintail, along with a raft of at least 40 Little Grebes! Meanwhile hundreds and hundreds of Swallows and both Martins are busy fattening up before heading south far across the sea. It soon becomes clear from the attire of the local birders that the best way to get into waders in this wild wetland is to literally get into waders, and paddle around fisherman style! We find Ruff and Spotted Redshank, but our lack of rubber footwear prevents us from reaching the Buff-breasted Sandpiper way out in the marsh, although a walk along the beach after lunch proves productive with a couple of Wheatears, a pair of Ravens, and lots of Dunlin and Ringed Plovers at very close range, amongst which we find Turnstone, Sanderling and an unfamiliar ‘mini Dunlin’, which we stalk to within ten yards, allowing fantastic views in the scope, leading to the conclusion that this is the Semi-palmated Sandpiper, whereupon the eventual view of its partially webbed toes, really clinches the deal! Finding such a small bird in such large area was quite an achievement. 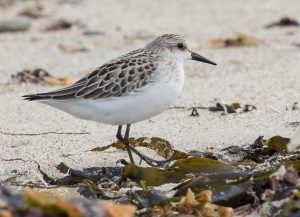 Heading west along the south coast into County Cork, we call at Ballycotton, where new birds include Stonechat, Lapwing, Black- and Bar-tailed Godwits, Sandwich Tern, Common Gull, a single Mediterranean Gull amongst hundreds of Great and Lesser Blacks, Black-headed and Herring Gulls, and a smart Curlew Sandpiper, but there is no sign of yesterday’s Pectoral Sandpiper. Further west, at a breezy Old Head of Kinsale, we scope another sentinel Peregrine, keeping a watchful eye from its lofty rock stack perch, while dozens of Gannets and Manx Shearwaters sail past the head. A pair of Choughs, probing the grass beside the road here, makes a nice end to the day, before we complete the last leg of our journey to quaintly colourful Clonakilty. 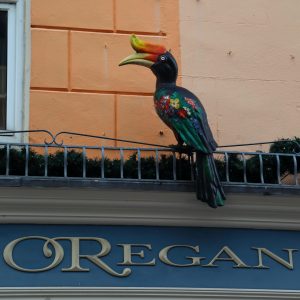 The bustle of Clonakilty is too much of a lure for some and so we make time first thing for a brief town tour before continuing our journey west, with a birding stop at Rosscarberry, where the estuary is peppered with waders and gulls, including loads of Curlews and Redshanks, plus Black-tailed Godwits, Greenshanks, a couple of Knot and three Mediterranean Gulls. However the star of the show is a Peregrine which puts on a thrilling aerial display as it repeatedly dives and swoops after several Hooded Crows and a Woodpigeon, all of which survive, although the Woodpigeon loses a few feathers in the chase. Last sighting here is a Kingfisher which flashes by, just across the road from the Kingfisher Bar! From Baltimore, we take the ferry across to Cape Clear Island, adding Fulmars, Kittiwakes and a couple of Porpoises to our list along the way. Once ashore we find our first Rock Pipit at South Harbour, while more Porpoises show not far out in the bay. We are literally blown away by the dramatic scenery on this wild island, awash at this time with yellow Gorse and purple Ling and Bell Heather, with the distant Fastnet lighthouse silhouetted against a sparkling silver sea. 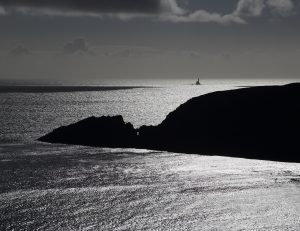 With a force six westerly barreling in from across the Atlantic, creating a very choppy swell, there is sadly no chance of a boat trip and so we have to make do with some exhilarating seawatching from the headland at the southwest tip of the island, where it is a challenge to stand upright or walk in a straight line against the battering wind! Sheltering in the lee of the land, looking across to the Fastnet lighthouse, a constant stream of Manx Shearwaters passes by in both directions along with plenty of Gannets, Fulmars, the occasional Kittiwake and Sooty Shearwater, and a Razorbill, plus Dolphins and Grey Seals, while real wild Rock Doves pose on nearby cliff ledges. Other island sightings include 15 Little Grebes on the small lake, several Stonechats, Rock and Meadow Pipits, a couple of Goldcrests and Ravens, a Great Skua, and brilliant scope views of two Choughs, as well as Peregrine, Kestrel and Sparrowhawk.

Despite last night’s force 9 gale, the ferry back to the mainland leaves as scheduled, with a spectacular rainbow plunging into the galloping white horses, and on the approach into Baltimore, hitherto elusive Black Guillemots, show well in white winter plumage. Returning east we make a second stop at Rosscarberry where the Kingfisher flashes past the Kingfisher Bar yet again, but there is no sign here of the Yellow-legged Gull reported yesterday. Back at Clonakilty, a scan through the hundreds of Dunlin on Muckross Sand, eventually turns up the vagrant White-rumped Sandpiper, reported yesterday, but the flock scarpers before we have chance to spot yesterday’s Baird’s Sandpiper, although an obliging Spotted Flycatcher is an unexpected bonus, bringing the trip list to a respectable 86 species, and we didn’t even get wet! 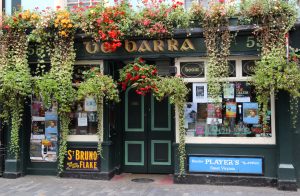