Home > Hortobágy and Kiskunság National Parks for the U3A 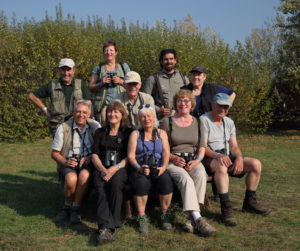 The forecast for Budapest is far warmer than it should be in autumn, and so we arrive to warm sunshine and a big blue sky. Driving east along the motorway, a stop for lunch produces Crested Lark, Sparrowhawk and Raven, while a later stop reveals Hooded Crows, two Jays and four Roe Deer feeding in a meadow, as well as plenty of distant raptors, plus a not so distant and far bigger Imperial Eagle; not a bad start for a travelling day.
It’s another glorious sunny day for a visit to the nearby Hortobágy National Park, where we soon see the first of many Crane flocks, feeding in the fields beside the road. The Elep fishponds are teeming with waterbirds including a group of forty Great White Egrets, a dozen Avocets, five Grey Plovers, a Snipe, a Black-winged Stilt and several ‘upstanding’ Caspian Gulls, as if on parade, while the appearance of a juvenile White-tailed Eagle suddenly creates a panic among all the Greylag Geese. Meanwhile we can hear Penduline Tits calling, and scope a couple of perched Marsh Harriers. We soon have four White-tailed Eagles circling in the scope, with another one up above, followed by a flyby Pygmy Cormorant. After a nice picnic lunch in the sunshine, we go in search of Great Grey Shrikes and find one sitting on top of a bush near the roadside, along with a feeding flock of around 1400 Cranes. Moving on to the territory of a pair of Saker Falcons, there are no signs of these raptors, so we make do with a Kestrel, and a Sparrowhawk mobbing a ringtail Hen Harrier. Next stop is a suburban cul-de-sac in the small town of Balmazújváros, an unlikely setting for a roost of two dozen Long-eared Owls, ‘sitting pretty’ in a line of trees right outside a small row of houses, affording excellent views and photo-opportunities. One wouldn’t want to be a mouse out after dark in this town! It’s now late afternoon and time to head back to the guesthouse in Tiszafüred, but another large flock of Cranes along the roadside, causes an emergency stop, where we spot a magnificent adult White-tailed Eagle sitting among all the Cranes! 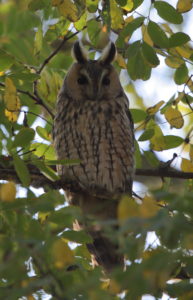 Just as forecast, it’s another glorious sunny day as we head north into the Bükk Hills National Park, where millions of leaves gently shower down from the towering Beech woods like golden snowflakes. Early birds here include Marsh Tit, Nuthatch and Middle-spotted Woodpecker. Suddenly an unfamiliar call alerts us to a rare White-backed Woodpecker, which eventually allows knock out views in the scope, while intently tapping away at the bark of a dead tree for half an hour! Even the local guide is in raptures, as it is his “best view ever!” Moving on we try a small limestone cliff for Rock Bunting, without luck, although we do see Black Redstart and Tree Sparrow. Another ‘Middle-spot’ shows really well at the next stop, while a vociferous Short-toed Treecreeper is far less obliging. After a picnic lunch by a small lake, we try the woods around Noszvaj, which are very quiet apart from a flock of Coal Tits and a Black Woodpecker, calling as it shoots by. Back in the plains of the Borsodi Mezoség nature reserve, or ‘Little Hortobágy’, we enjoy seeing plenty more Cranes and Roe Deer, as well as a Red Fox with a magnificent bushy tail, a couple of Hen Harriers, and a pair of impressive Saker Falcons sitting on distant pylons. After a big red sunset, we find Billy the White Stork, back in ‘our’ village, standing alone on his roadside nest platform, while all his ‘mates’ are on their way to Africa. 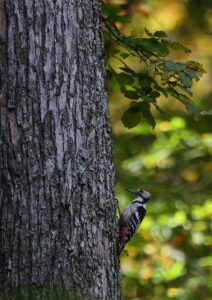 The warm sunny weather continues this morning as we revisit the Hortobágy National Park, with another Great Grey Shrike along the road, and then a low flying White-tailed Eagle. The extensive fishpond system near the Hortobágy village is worthy of a full day, where we soon enjoy close views of an inquisitive Penduline Tit, followed by numerous Pygmy Cormorants and another forty plus Great White Egrets, as well as Pintail, Snipe and a single Slavonian Grebe. Subsequent sightings include another White-tailed Eagle in the scope, repeated flyby Kingfishers, a Water Rail, and a female Sparrowhawk in the same scope view as a smaller male Kestrel. 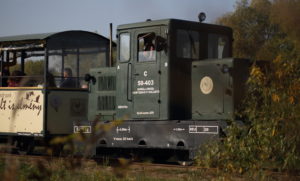 At 2pm we catch the ‘toy’ train which trundles deeper into the fishponds at a sedate 14 miles per hour. At the end of the line the massive Kondás ‘pond’ has a tightly clustered resting flock of around 1000 Cranes, until an adult White-tailed Eagle moves in to grab one unfortunate bird, which it proceeds to tear into while two juvenile eagles watch from the ‘side lines’. Once the eagle has had its fill one of the juveniles moves in to finish the ‘scraps’. A small flock of White-fronted Geese are also here, while another pair of adult White-tails watches the entire show from the top of a traditional wooden well, where they sit out the whole afternoon. As the sinking sun gradually reddens, skein after skein of Cranes appear in waves above the trees along the horizons, before dropping onto the distant plain for one last forage. Meanwhile the core of 1000 Cranes grows by the minute as thousands and thousands more Cranes make their final approach into this traditional roosting site, bugling as they pass overhead. We watch this staggering spectacle for over an hour, by which time around 100,000 Cranes must have gathered in a deafening cacophonous congregation, along with a single Spoonbill! Throw in a large murmuration of Rooks and this must surely be one of the greatest wildlife experiences in all of Europe! 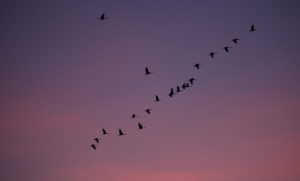 We start yet another sunny day with a pair of Hawfinches in the scope on the guesthouse car park! Back in Hortobágy National Park, we enjoy our daily Crane ‘fix’ with yet another flock feeding beside the road, and even spot a Long-legged Buzzard standing among the Cranes, until it takes off to hover above the ground like an overgrown Kestrel with ‘dangly’ legs. By now we are ‘off piste’ on dirt tracks, looking for the proverbial needle in a very large haystack, as the big sky Hungarian steppe (Puszta) stretches in every direction without any fences, woods or significant buildings, only grass, grazed by wild Przewalski’s Horses and the local breed of long-horned grey cattle. The ‘needle’ is the Dotterel which regularly stopover here on their way south to north Africa. Fortunately, our task is made easier with the help of a Park Ranger, who takes us to a ‘trip’ of seventeen Dotterel, hunkered down with thirteen Golden Plover, and perfectly camouflaged amid the pale arid soil and sparse sun-bleached turf. Mission accomplished, we also find a Rough-legged Buzzard on our way back to ‘civilisation’, with Goulash for lunch in a traditional roadside inn (Csárda). 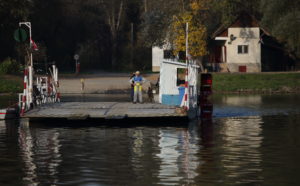 This afternoon, we take an old paddle-powered ferry across the River Tisza to the ‘Little Hortobágy’ area, hoping for better views of Saker Falcon. We are not disappointed, with stunning views of two of these rare and impressive falcons on the ground and in the air, where they dwarf a passing ringtail Hen Harrier, making a total of nine different raptors today!
The tee shirt weather continues on our last day in Hortobágy National Park, where we begin with a search for a vagrant Sociable Lapwing from central Asia! There it is, in a crowd of Lapwings, showing really well on the ground and occasionally showing off its black and white wing pattern in flight. How lucky is that? Other new birds here include Ruff, Greenshank, Spotted Redshank and a leucistic Teal. Moving on to the shore of massive Lake Tisza for a picnic, we find a small raft of Black-necked Grebes and a couple of Black-throated Divers. This afternoon we draw a blank with Imperial Eagle, before ending up at the very nice Forster Hotel in Kiskunság National Park.
We spend the last birding day in Kiskunság National Park, with the sun shining warmer than ever. News of a vagrant Long-billed Dowitcher just ‘down the road’ is an obvious starting point, but apparently we should have been here ten minutes earlier before all the noisy White-fronted Geese and other waterbirds got spooked by a passing raptor. Moving on, a flock of around twenty five stately Great Bustards brings the bird list for the trip to 100 species, along with another Rough-legged Buzzard. Scouring the fishponds, we dip on Ferruginous Duck, but scope another Kingfisher. Back in the fields we relocate the Great Bustards, which now number thirty seven, in better light, providing super views in the scope.

By late afternoon it’s time to return to the hotel, but still needing Syrian Woodpecker, István finds us one back in the village not far from the hotel. For an after dinner treat, István also finds us an obliging male Tawny Owl in the hotel grounds, bringing the trip list to 104 bird species, including ten different raptors, three different owls and six woodpeckers, plus tens of thousands of spectacular Cranes!