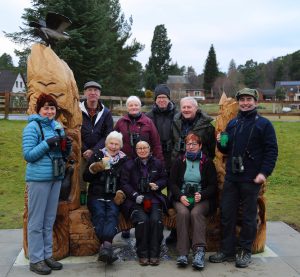 It’s still barely light by 9am as the Red Squirrels are tucking into their first snack of the day, while plenty of Roe Deer are quietly grazing amongst the rough pastures, although there are no signs of Black Grouse at the local lekking site, despite a patient wait, while watching one or two Buzzards and Ravens float by. Moving on we stumble upon a mixed flock of Chaffinches and Bramblings, on the way to the Loch Garten RSPB reserve, where the pinewoods are alive with friendly Coal Tits eager to take food from an outstretched hand! Amongst the frenzy of Coal, Great and Blue Tits is a couple of ‘Cresties’ giving lovely views at close range, alongside another Red Squirrel. Next we head for a private estate to scour the forest for the increasingly elusive Capercaillie, using the ‘van’ as a mobile hide. A slow crawl through the silent forest leads to a breezy summit, ideal for a picnic while watching a juvenile Golden Eagle drift along the distant skyline. Moving on after lunch, a male Caper shows fleetingly as it flies across the track right ahead of us, presumably having been feeding not far away from our ‘picnic site’! From here we head north along Strathdearn, spotting a large herd of Red Deer high up on the valley slopes, as well as two or three Mountain Hares in their white winter coats, despite the absence of any snow cover. On the way back down the valley, a Brown Hare shows well right beside the track, followed by a Dipper along the river bank just as the light begins to fade. 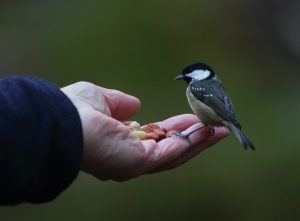 It’s New Year’s Eve and we begin the day at another Black Grouse lek, but the Blackcock are still on strike and nowhere to be seen. As the light brightens we pick out a well camouflaged Red Grouse, hunkered down in the heather, but given away by her brilliant white eye rings. Heading north we make for the Moray coast, where the Rowan trees in Forres have been stripped of their berries, but like the Black Grouse, there are no other signs of the recently present Waxwings, with only Redwings on show until dispersed by a dashing Sparrowhawk. The nearby Findhorn estuary teems with Pintail, Oystercatchers, Curlews and swirling flocks of Knot. For elevenses, we visit a long sandy beach looking out across Burghead Bay, with a wintering raft of drake Velvet and Common Scoters, a few smart Long-tailed Ducks and a handsome drake Red-breasted Merganser. Inland the fields produce Pink-footed Geese, Lapwing, Rook, Tree Sparrow and Yellowhammer. Seeking shelter for lunch, we find a slightly less breezy spot at Burghead, with Eider, Goldeneye, Shag, Turnstone and Purple Sandpiper along the shore. After lunch, the beach at Hopeman harbour produces Ringed Plover, Sanderling, Bar-tailed Godwit, Rock Pipit and a large raft of Eiders. Last stop of the day is the East Beach at Lossiemouth, which is absolutely packed with thousands of gulls at remarkably close range. Among the crowd we find an adult Iceland Gull and another pale-mantled gull with a light grey banded pattern on the primaries, reminiscent of Kumlien’s, and after a mass debate we conclude it is simply a leucistic Herring. Gulls can often be an interesting challenge.

After dinner, we gather around the roaring log fire to listen to Jonny’s flute playing and local tales from bygone years, followed by a light-hearted quiz, before heading into Grantown-on-Spey for “Hogmanay in the Square”, where hundreds of people gather in the main street to celebrate Hogmanay with mulled wine, ceilidh dancing and a spectacular firework display on the stroke of midnight. 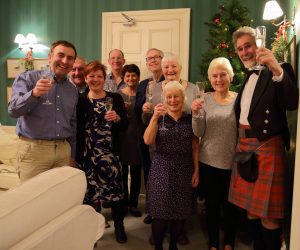 The first bird of 2019 is a Treecreeper right outside the breakfast room window, along with Coal and Great Tits, and within a minute of leaving the hotel we add a flock of Brambling to our new year list. Back in the pine forest around Loch Garten, dozens of Coal Tits readily come to the hand for an easy meal, while the more reserved ‘Cresties’ stay at arm’s length. An obliging Great Spotted Woodpecker is another good sighting here. After a stop for elevenses, we revisit the private estate hoping for another Caper sighting. The habitat is prime Caledonian forest with a lush carpet of Heather and Bilberry, but sadly no sign of the almost mythical Capercaillie, although plum sightings of a couple of dozen ‘tangerine and lime’ Common Crossbills, posing in the tree tops is a nice bonus. Moving on we add Pink-footed Goose and Red Grouse to the year list, which along with Brambling, Crested Tit and Crossbill is not a bad start after just one day! 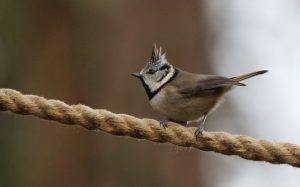 With a sliver of a waning moon next to sparkling Venus in an otherwise clear pale blue sky, it’s a crisp -5°C first thing this morning as we set off to the nearby Black Grouse lek. At last our luck is in as three pugnacious ‘pumped up’ cocks, with fanned out white tails and inflated vivid red eye brows are busy sparring, even though there are no hens in sight! After several bouts of ‘fisty cuffs’ at dawn, we leave the ‘lads’ to continue brawling and move on, spotting a couple of chilled out Red Grouse and a Stonechat along the roadside. It’s now time for ‘Operation Ptarmigan’ at the Cairn Gorm ski resort, with a very appropriate Snow Bunting on the funicular roof. Scanning the hoary mountain slopes, we find a persil white female feeding quietly way up amongst the boulders. Not content with this distant view we accept Scott’s challenge to ‘scale the heights’ in the hope of a closer encounter with these superbly camouflaged birds. An hour or so higher, we relocate ‘our bird’ at much closer range, and a little higher, while scanning the distant slopes, we notice another all white female sitting quietly not far ahead. A male, with his ‘highway man’s mask’ pops up from behind a rock, and then a second female appears, with all three giving really close views, even down to their thickly feathered feet; mission accomplished! With three of the four British grouse in the bag, we can’t resist the chance to make it a ‘happy family’, by finding a Capercaillie back in the forest, but, like the song goes, “three out of four ain’t bad”. 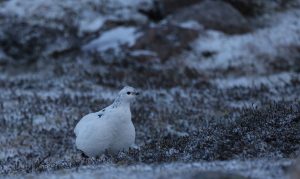 This morning, we set off well before dawn, heading towards Gairloch on the beautiful rugged northwest coast, spotting Hooded Crows and twenty-one Whooper Swans on Loch Glascarnach along the way, followed by a flyover White-tailed Eagle in Dundonell Gorge and a flock of ‘wild’ Rock Doves once we meet the shore of Little Loch Broom. Next stop is Gruinard Bay, where we find a flock of Barnacle Geese grazing the only green field for miles, the first of many Great Northern Divers, a couple of Black Guillemots, and a pod of at least thirty lively Common Dolphins, playfully cavorting and splashing clear of the water. “Anybody want a Rat?!” shouts Paul, while actually spotting an Otter, running down to the shore for a swim across the bay! To be fair, Rats and Otters both have long tails! Further round the bay, a large body on the sand turns out to be a beached Great Northern Diver, stranded by the receding tide, and unable to walk back into the sea as its backwardly projecting legs are incapable of supporting its body. Thankfully, our guides go to the rescue and carry the bird back to the water’s edge, whereupon it can sail out to join a raft of around thirty Black-throated Divers! Moving on, twenty Common Seals hauled out on rocks in that typical banana shaped pose add to the growing mammal list, along with a flock of thirty or so smart looking Wild Goats. From the pink sandy beach at Mellon Udrigle, we add Harbour Porpoise, Gannet, Guillemot and Kittiwake to the ever growing list, with a low circling Golden Eagle to finish another good day’s wildlife ‘safari’.

We begin our last day in the field, with an early Dipper on the Spey, from the Broomhill Bridge en route to the private estate for a last try for a new year Capercaillie, but no luck again. Next stop is Loch Flemington, in search of a recently seen Green-winged Teal, which is as elusive as the Capercaillie, but we do find a drake Goosander and plenty of obliging Whoopers and Goldeneye here. Moving on to the Black Isle, Red Kite is new for the list. The mudflats at Udale Bay are teeming with waders and wildfowl including Lapwing, Curlew, Knot, Redshank and Bar-tailed Godwit, while new birds offshore include Scaup and Slavonian Grebe. We end the day with a final cuppa overlooking the mudflats at Redcastle, where a skein of about three hundred Pinkfeet drop in to roost at dusk, making a nice end to a trip with plenty of memorable highlights, like the playful pod of Common Dolphins, the lekking Black Grouse, the tree full of posing Crossbills, the raft of Black-throated Divers, the low flying Golden Eagle, the close views of three Ptarmigan in the snow, the even closer views of Red Squirrels and Crested Tits, and of course, the Hogmanay celebrations, as well as all the wonderful scenery, and all with a really lovely group.