Home > From the Ebro Delta to the high Pyrenees 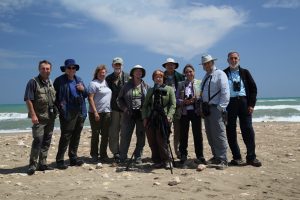 We began in the Ebro Delta, where a pre-dinner stroll from the Delta Hotel produced a Black-crowned Night Heron roosting in the hotel grounds, followed by Squacco Heron, Little Egret, Black-winged Stilt, Audouin’s and Yellow-billed Gulls, Hoopoe, Spotless Starling, Tree Sparrow and plenty of Glossy Ibises, amongst the surrounding rice fields, as well as Whiskered and Gull-billed Terns, flying together and showing the marked size difference between them. So, that was not a bad start to the list.
Crossing the Ebro to the south side of the delta, via a bridge where there used to be a ferry, our first stop today was at the Alfacada lagoon, with Crested Larks in the coastal scrub, and a smart male Penduline Tit showing well in the Tamarisk bushes just across the Migjorn channel, while Great Reed Warblers croaked noisily in the adjacent tall reeds. A little further on, the tower overlooking the lagoon produced plenty of sightings such as Purple Heron, Purple Swamphen, Spoonbill, Flamingo, Avocet, Black-tailed Godwit, Wood and Curlew Sandpipers, Dunlin and Little Stint, with a Zitting Cisticola bouncing in the air while ‘zitting’ constantly. Next we headed south for a picnic lunch at the Riet Vell Visitor Centre, where we also found Pied Flycatcher, Common Terns and plenty more Flamingos. From here we followed a long sandy track south toward Punta de la Banya, with great scope views of rosy pink Slender-billed Gulls, and Little Terns, while a passing Sandwich Tern made five different terns seen today. Other new birds this afternoon included Red-crested Pochard and both Little and Great Crested Grebes. 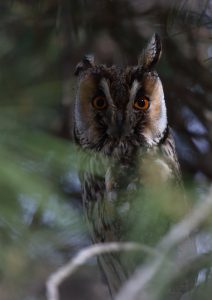 It was unusually cool, cloudy and breezy outside the hotel this morning, where a brief tour of the grounds produced a singing Serin and two male Little Bitterns, while a pair of roosting Long-eared Owls stared at us with their liquid amber eyes. Still wanting Collared Pratincole, we returned to the delta, where we soon found our quarry along with the bonus of a vagrant White-winged Tern amongst the many Whiskered Terns! It was now time to leave the delta and head northwest through a scenic landscape of terraced olive groves, with plenty of Black Kites and one or two White Storks along the way, as well as a posing Bee-eater at the lunch time stop. We were now in the big sky country of Lower Aragón, amidst a wide open treeless landscape of arid steppe bordered by multicoloured cliffs, reminiscent of the ‘wild west badlands’, with our first soaring Griffon Vultures. At a lofty wind-battered viewpoint, we clung to our hats while watching a Black Wheatear repeatedly return to its favourite perch on a stone ruin down below, despite the gale force wind! From here, a slow drive along the A2105 produced a steady stream of new sightings including Black-eared Wheatear, Corn Bunting, Red-legged Partridge, Woodchat Shrike, Linnet, Red-billed Chough and Calandra and Short-toed Larks, as well as great views of both Montagu’s Harrier and Short-toed Eagle flying low to the ground in a battle against the wind. Heading west to the El Planerón nature reserve, a Fox sauntered towards our vehicle flushing a Stone Curlew from the roadside.

We left the hotel before dawn this morning for ‘Operation Dupont’s Lark’, back in the ‘badlands’ of El Planerón. As the full moon faded, a spectacular sunrise developed over the eastern horizon, while the dawn chorus included the slow melancholy whistles of our target bird. Despite singing at close range, this elusive lark, remained invisible! It is remarkable how this bird hides away so easily in such scant vegetation, although a trio of Pin-tailed Sandgrouse flying over at fairly close range was a nice consolation. After a later than normal breakfast back at the hotel, alive with singing Greenfinches, Serins and Linnets, it was time to head for the hills. On the way to the foothills of the Pyrenees, we visited the imposing Castillo de Loarre. This picturesque location, produced a bevy of new birds such as Red Kite, Cirl Bunting, Tawny Pipit, Woodlark, Stonechat, Blue Rock Thrush, Crag Martin and Short-toed Treecreeper, along with a very confiding Bonelli’s Warbler virtually at arm’s length! After a picnic lunch in this beautiful setting, we moved on to the awesome towering pinnacles above Riglos, home to Griffon Vultures, and crawling with rock climbers as this was a Saturday. Back on the road, we made an emergency stop for an Egyptian Vulture, followed by a planned stop near Arrés for Melodious Warbler and Ortolan Bunting. The not so melodious warbler showed off its delicate lemon yellow breast, but there was no sign of the bunting, as it may have been too breezy. Journey’s end was the Hotel Montana Usón in the beautiful Hecho valley, where the surrounding peaks were dusted with fresh snow from the recent cold snap! 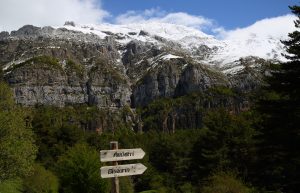 There was even fresh snow on the treetops on the valley slope above the hotel this morning with rain down below, so we decided to ‘bird’ from the vehicle, starting with dozens of Northern Wheatears all over the grassy slopes along the roadside, reminiscent of a migration ‘fall’, as if they had all descended to avoid the snow. Also showing well here were plenty of Citril Finches, plus Black Redstart and Rock Bunting. Further along the road, we stopped for a constantly singing, but very elusive Garden Warbler, followed by a far more obliging Firecrest, showing well just yards away from us. At the end of the road, by the Rifugio de Gabardito, the grassy meadow was alive with yet more Wheatears, Black Redstarts and Citril Finches, as well as a pair of Mistle Thrushes. Fortunately, the weather was not too wet for several Water Pipits, showing their lovely salmon pink breasts. 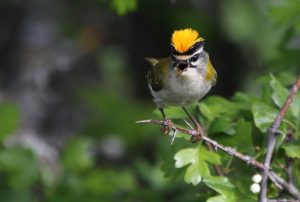 After lunch back at the hotel, we drove along the narrow winding road through the Boca de Infierno, an impressive gorge carved by the power of the fast flowing Rio Aragón Subordán. Along the river, we spotted several Dippers, as well as a Crested Tit feeding in an adjacent Pine tree. All along the road, loads more Wheatears showed well at very close range, along with yet more Black Redstarts, plus Grey and White Wagtails and a really smart male Bullfinch. As the trees gave way to meadows, purple and yellow Orchids sprouted from the melting snow, and several plump Alpine Marmots sat lazily around their burrows as if only recently emerged from a long winter sleep. High up the valley, we found a handsome male Red-backed Shrike, posing nicely, a trio of Griffon Vultures on the ground, attracted by the carcass of a horse, and a couple of Alpine Choughs, with yellow bills and a distinctive whistle, amongst a flock of over a hundred or so Red-billed Choughs. During a brief stop at the end of the road, the unmistakable outline of a Bearded Vulture high in the sky was an easy ‘car park’ sighting! On the way back down the valley, a Chamois made a nice end to a really productive day despite the poor weather. 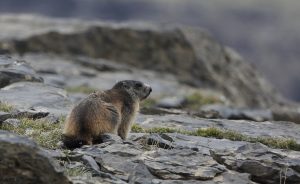 Yesterday’s snowy tree tops were in full sun this morning, and all the Wheatears had moved on! What a difference a day makes. At the end of the road to the Gabardito mountain refuge, we set off on ‘Operation Wallcreeper’, enjoying super views of Blackcap and another Firecrest along the path. Beyond the trees the track meets a cliff face and the stake out began. Within minutes, Jude excitedly called “there it is!” while pointing to this almost mythical bird, clinging to the base of the cliff at eye level! We were even able to track the bird as it shuffled along the cliff face just above us on broad moth-like wings, showing off the blood-red wing patches, black throat and long fine decurved bill. What an amazing achievement to get such fantastic views in the ‘bins’, and even in the scope, of one of Europe’s most highly sought birds. Mission accomplished we returned to the refuge for a picnic in the sunshine, surrounded by Citril Finches and some amazing scenery. 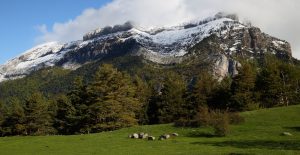 Heading south and then east from the Hecho valley, one of the many spectacular viewpoints hereabouts produced a singing Subalpine Warbler, while a Sparrowhawk whizzed by down below. Next stop was at the ‘new’ monastery of San Juan de la Peña, built in the seventeenth century! Jay, Crested Tit and a pair of Nuthatches at very close range were ‘car park birds’ here, followed by a dramatic ‘air show’ by four Egyptian Vultures from the Balcón del Pirineo mirador. Journey’s end was the tiny village of Nerín, with the most amazing vista of spectacular Monte Perdido. Every day the scenery seemed to get more and more spectacular and today was no exception. As the village is at the end of the road, we boarded a special tour bus for a white knuckle ride up a very winding track high into the national park. Less than an hour from the ‘bus stop’, we were ‘on top of the world’, in the wilderness of this magnificent national park, spotting Red Kite, Alpine Choughs and Alpine Marmots. Up there at over 6300 feet, the vistas were quite literally breathtaking, with stunningly spectacular dramatic scenery in every direction; blue sky, snow-capped peaks and awesome cliffs plunging two thousand feet into a green valley with waterfalls and an aquamarine river. Our targets were Alpine Accentor and Snow Finch and we soon found an Alpine Accentor close by, and yet the whole day was worth it for the unforgettable views alone. On the way back down to the village, a Bearded Vulture glided by close enough to see his beard, a Short-toed Eagle hovered over the valley at eye level while looking for snakes, and we also found Dartford, Subalpine and Garden Warblers, as well as a pair of Tawny Pipits on the edge of the village. What a memorable day. 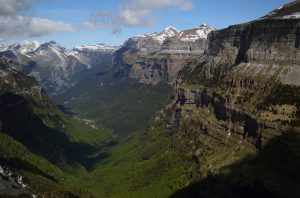 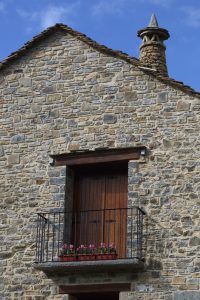 It was a beautiful sunny morning with a cloudless blue sky, ideal for exploring our high altitude village set amongst such spectacular scenery, where our first new bird was a vociferous Orphean Warbler, singing and showing well at close range, followed by Spotted Flycatcher in the medieval picture postcard village, and a calling Wryneck which eventually gave cracking views in the scope of its intricately camouflaged patterning. Moving on from beautiful Nerín, a stop at the Val de Vio mirador, offered more superb photo-opportunities of the stupendous landscape, while a couple of Alpine Swifts swept by at speed. After a picnic lunch at an old ornate fuente, serenaded by a choir of Nightingales, we enjoyed fine scope views of a singing Ortolan Bunting in the Sierra de Guara Natural Park, where we made an ‘emergency stop’ for a fly by Golden Oriole, where Rock Sparrow and Red-rumped Swallow also appeared. Not far from our last base in Loporzano, a visit to the eleventh century castle ruins of Montearagón produced another Black Wheatear, plus Bee-eater, Tawny Pipit, Thekla Lark and a Roller. Journey’s end was the Boletas Birdwatching Centre, where the sixteenth century building with thick rock solid walls, low beamed ceilings and chunky stone archways was our home for the next two nights. Dozens of Swifts screamed around the ancient crumbling church tower, Spotless Starlings whistled from the terracotta roof tops, and colonies of House Martins twittered under the eaves. 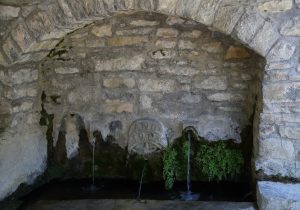 It was our last day in the field and we began with a local stroll in the floral countryside, rich with the scents of Honeysuckle and Thyme, not far from the village, where the wonderful soundtrack included performances by Cuckoo, Bee-eater, Crested Lark, Woodlark, Nightingale, Melodious and Orphean Warblers, Greenfinch, Serin and Corn Bunting, while new birds here included Sardinian Warbler and a pale phase Booted Eagle. From a vantage point overlooking the valley below, we watched Crag Martins resting on the rocky ledges, with handsome male Black and Black-eared Wheatears posing on nearby rocks and colourful Bee-eaters flying by. 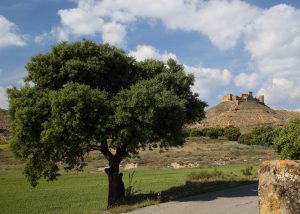 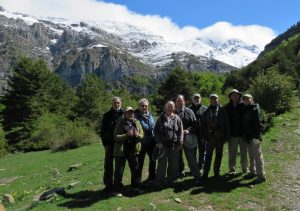