At 60 degrees north, the Shetland archipelago of 100 or so islands is on the same latitude as southern Greenland, and is closer to the Arctic Circle than to London! In fact it is as near to Bergen as it is to Aberdeen and so the largely treeless landscape resembles the tundra, with Nordic place names to match. Consequently Shetland is the most ‘foreign’ part of the United Kingdom, with some of our most ‘exotic’ breeding birds. Arctic species breeding at the southern limit of their range include Whimbrel, Great and Arctic Skuas, occasional Whooper Swans, and ridiculously tame Red-necked Phalaropes which can be approached to within a few feet! Other northern specialities breeding here include Red-throated Diver, Wigeon, Eider, Golden Plover, Dunlin, Arctic Tern, Black Guillemot and even Common Scoter. Nowhere on Shetland is more than 3 miles from the sea, and the rugged coastline has a wider range of breeding seabirds than anywhere else in Britain. As well as some spectacular seabird colonies we can also hope to see Peregrine, Red Grouse, ‘wild’ Rock Dove, Rock Pipit, Wheatear, Hooded Crow, Raven, Twite and the dark plumaged ‘Shetland Wren’. From the wild coast we may also see Minke and Killer Whales, Harbour Porpoises, Dolphins, Otters, Grey Seals, and Common Seals, which pup in June when the short light nights of the ‘Simmer Dim’ are the ideal time to witness the amazing spectacle of thousands of tiny Storm Petrels coming ashore on Mousa, where they nest in the 2000 year old stone broch. This experience will undoubtedly be one of the highlights of this fabulous trip to the northern limit of the British Isles.

An early morning flight from Manchester to Sumburgh, via Aberdeen, means that we will be on Shetland by late morning, and driving the entire length of the ‘mainland’ and across to even wilder Yell, where the RSPB has one of its remotest reserves. Along the route we shall be on the lookout for Otters, Merlin and Red-throated Divers, which breed on the numerous lochans that pepper the landscape. Beyond Yell is the island of Unst, where we will be staying for three nights at the Baltasound Hotel, the most northerly hotel in the UK! During our stay we shall spend a day on Unst, and will visit the National Nature Reserve of Herma Ness where the spectacular cliffs rise to over 550 feet, heaving with 100,000 pairs of seabirds including 25,000 pairs of Puffins and the world’s third largest colony of Great Skuas! Offshore the UK’s northernmost outcrops of Muckle Flugga and Out Stack are turned white each spring by the arrival of 12,000 pairs of Gannets. The sights and sounds here are amazing. From our base on Unst, we shall also visit the neighbouring island of Fetlar, the ‘garden of Shetland’ where the RSPB Loch of Funzie reserve affords incredible ‘arm’s length’ views of dainty Red-necked Phalaropes, while other top birds include Whimbrel, Golden Plover, Great and Arctic Skuas and ‘wild’ Rock Doves. Returning to the ‘mainland’ we have three nights at the highly acclaimed Scalloway Hotel with an enviable waterfront location and a reputation for fine dining. From here we explore the top ‘mainland’ sites including the RSPB Loch of Spiggie reserve, with ‘drumming’ Snipe, noisy Arctic Terns and the possibility of breeding Whooper Swans, and Sumburgh Head, another RSPB reserve with awesome sea views and possible sightings of Cetaceans, as well as thousands of seabirds. We shall also take a ferry across to Bressay, followed by a short ride in a Zodiac to whisk us across the narrow sound to the Isle of Noss. This sharply pointed island is another National Nature Reserve, with spectacular cliffs which are literally plastered in birds including 45,000 Guillemots! At 11pm one evening, weather permitting, so fingers crossed for this, we shall board a boat at Sandsayre Pier to take us across to Mousa. Although uninhabited by people, it is ‘home’ to 8% of the British population of Storm Petrels, thousands of which nest in the ancient stone broch, and duly come ashore each summer evening, allowing fabulous close views of these tiny seabirds. This visit alone will leave you with an unforgettable memory of Shetland.

What the price includes:
Return flights from Manchester to Sumburgh, via Aberdeen, with Flybe, six nights half board en-suite accommodation, all ground transport and inter island ferries in Shetland, boat excursions to Noss and Mousa, bird checklist and the services of your guide. 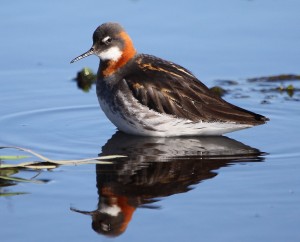