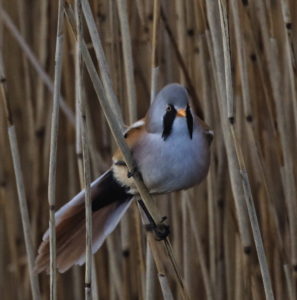 With famous names like Cley, Titchwell, Minsmere, Strumpshaw Fen and the Ouse Washes, East Anglia is one of Britain’s most outstanding birding areas, with top birds like Whooper Swan, Brent Goose, Bittern, Spoonbill, Crane, Avocet, Stone Curlew, Mediterranean Gull, Barn Owl, Woodlark, Dartford Warbler and Bearded Tit to look out for. At this exciting time, we can also hope for news of incoming rarities and so one never knows just what might turn up. Whatever happens, we shall be in the thick of it, and so we should end up with an exceedingly good bird list which could well top 100 species!

We leave Eastwood by people carrier at 9.30am and drive to the Wildfowl and Wetlands Trust’s reserve at Welney in the Ouse Washes, home to Britain’s largest concentration of inland wintering wildfowl, where we can see thousands of Wigeon, Teal, Lapwing and Golden Plover, as well as Pintail and Whooper Swans, which visit for the afternoon swan feed. There is also a possibility of Great White Egret and Cranes. From here we continue to the Wensum Lodge Hotel, a converted eighteenth century mill beside the River Wensum with resident Grey Wagtails, on the outskirts of Fakenham for a two night stay. From here, we spend a day visiting the Titchwell Marshes RSPB reserve and Cley Marsh, the famous Norfolk Wildlife Trust reserve. Both these coastal reserves teem with wildfowl, like newly arrived Brent Geese, and waders like Avocet, Ruff and Spotted Redshank, plus Bittern, Spoonbill, Water Rail, Marsh Harrier and Bearded Tit, as well as having a reputation for turning up rarities. Next day, we head further east to the Strumpshaw Fen RSPB reserve, in the Yare valley where the full range of broadland habitats offers another chance to see birds like Bittern, Marsh Harrier and Bearded Tit, as well as Kingfisher, Cetti’s Warbler and all three woodpeckers. We end the day with a visit to the nearby Buckenham Marshes RSPB reserve. As well as all the water birds, including possible White-fronted Geese, this reserve can attract predators such as Peregrine, Merlin and Short-eared and Barn Owls. On top of all this there is a spectacular early evening gathering of Rooks and Jackdaws in the tens of thousands! Our next base for two nights is the excellent and aptly named Swan Motel in the village of Gillingham, not far from the Suffolk border. From here we have a full day on the Suffolk coast at the famous Minsmere RSPB reserve, where the diversity of habitats guarantees a wide selection of birds, with up to twenty species of waders, such as Little Stint, Green and Curlew Sandpipers, Greenshank and both godwits as well as Marsh Harrier, Bittern, Mediterranean Gull, Bearded Tit and possible visitors like Spoonbill and Black Tern. The adjacent Dunwich Heath is home to Dartford Warblers, and time permitting, we can visit Sizewell Beach on the lookout for Black Redstart. On our last day we return home via the Lackford Lakes Suffolk Wildlife Trust reserve, which has several hides overlooking gravel scrapes, for yet more waders and hopefully Kingfisher, while the nearby Cavenham Heath National Nature Reserve, is a good spot for Stone Curlew, Green Woodpecker and Woodlark. Sounds great eh?

What the price includes:
Return transport from the Nottingham area, four nights’ half board en-suite accommodation, bird checklist and the services of your guide.