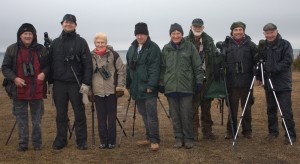 March 21st is officially the first day of spring, but with a sparse coverage of snow still on the ground it still looks and feels like winter in Estonia, and as if to emphasise the point, one of our first birds is a drake Long-tailed Duck in handsome winter plumage, sitting on the edge of the sea ice, while we wait for the ferry to Muhu Island. A brief stop on the causeway between Muhu and Saaremaa produces all three swans in shed loads, along with numerous Goosander and Smew, and a low-flying White-tailed Eagle which perches in a leafless tree. Add several Cranes, Ravens, and a field of Bean Geese and it’s not a bad start, especially for a travelling day.

We set off into the forest before dawn hoping for Pygmy Owl, but it’s a ‘no show’. As the sunshine lights up the forest, the woodpeckers are more obliging as we see Great Spotted, followed by super scope views of Black Woodpecker and then Lesser Spotted. A couple of Woodlarks fly over singing and we also spot Treecreeper, Bullfinch and Parrot Crossbill. In a wet field we find White-fronted Geese, Ringed Plover, Green Sandpiper, a pair of bugling Cranes and two Snow Buntings amongst a flock of fifty or so Skylarks, with a Great Grey Shrike watching from a roadside wire. All this before breakfast!

It’s now time for ‘Operation Steller’s Eider’ off Cape Undva, where a thorough scan produces every conceivable sea duck including Red-breasted Merganser, Goosander, Goldeneye, Common Eider, Shelduck, Tufted Duck and Scaup, with hundreds of Long-tailed Ducks and Common and Velvet Scoters showing really well, but no Stellers’, although there were about 100 here just four days ago! Inland, we see a perched Merlin, as well as Roe Deer, Mountain Hare and a lanky Elk. It has been lovely and sunny all day until we return to Undva for another scan for Steller’s Eiders, where encroaching fog soon puts the kibosh on our mission and so we return to base.

The weather is not so good today but at least it’s calm at Cape Undva, where Steller’s Eiders are our target again. There are plenty of the usual suspects plus Red-throated Diver and Black Guillemot, but again no sign of our quarry, and as the rain starts and time passes, things are looking desperate, until the ‘eleventh hour’ when our guide Margus spots two pairs of ‘our’ Eiders steaming across the far side of the bay! There’s a scramble to the scopes to home in on these rare and elusive sea ducks, and after a good long look, Margus and I breathe a sigh of relief as it’s time to catch the ferry back to the mainland. After a very nice lunch in the quaint old town of Haapsalu, Margus finds us a red-crowned White-backed Woodpecker, and as we enjoy brilliant scope views, a second male arrives and sits on the same branch! A little further north, the pine forest produces a Crested Tit, posing for several minutes at the top of a tree while we scope it singing, followed by a noisy Nutcracker landing on three ever nearer tree tops before flying straight over us. This milestone sighting is John’s 200th lifer on trips with New Horizons!

We have one last morning’s birding before the flight home from Tallinn and so we visit a Black Grouse lek en route to the airport. Although the grouse are not yet displaying we count several dozen in the boggy meadows, as well as a flock of Bean and White-fronted Geese alongside Whooper Swans, Common Cranes and one Barnacle Goose, while other sightings here include Hen Harrier, Merlin, Great Grey Shrike and lots of Skylarks and Snow Buntings. Just as we pack our optics and hit the road for the airport, a male Capercaillie flies across the road right in front of the vehicle and glides away into the forest! For a short break we have had some quality sightings, and the omens are good for a return visit in the autumn.