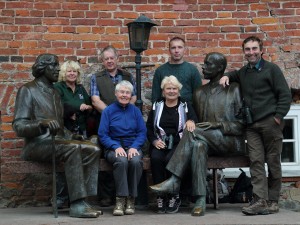 “Welcome to Estonia” is the greeting at Tallinn airport, where there is a slight chill in the air and golden tints to the trees. On the drive to the southeast, we pass numerous bulky but unoccupied White Storks’ nests, the owners having all headed south, apart from one still feeding in a roadside field, which according to our guide Kaarel is probably the last one left in Estonia! After a delicious lunch in a lovely old manor house, out come the optics for a congregation of about fifty Cranes at the Aardla wetlands, where we also spot several Marsh Harriers, a couple of Fieldfares, Great White Egrets and a small group of White-fronted Geese with a single Tundra Bean Goose amongst them. From here it is a short drive to Mooste, with a trio of Bramblings in a tree top, and the Viinavabrik Guesthouse, an old Vodka distillery in a fabulous lakeside setting with Whooper Swans.

This morning there are Tree Sparrows perched on the guesthouse and after a short drive we find a single Blackcock in the middle of a ploughed field! Just as it is joined by three more, and they begin to display, the sudden appearance of a White-tailed Eagle flushes them away. Incredibly one of the Black Grouse perches on a telegraph wire, and just down the road we find the other three perched in the tops of tall birches, just like crows! On the western shore of Lake Peipus (the fourth largest lake in Europe) we count at least five White-tailed Eagles, and at one point I have three in the same scope view! From our vantage point, looking across to the Russian side, we watch a flock of Jays cross the lake from the east, followed by a single Black Woodpecker, which promptly decides to turn back. Meanwhile, the dead tree above our heads attracts a flock of ‘Northern’ Long-tailed Tits, with pure white heads, and then a female White-backed Woodpecker, showing all the details of her plumage. Finally, a skein of Bean and White-fronted Geese passes overhead, again from the Russian side of the lake. Moving on, an exploration of forest tracks produces a Pine Marten crossing ahead of the vehicle and more close views of white-headed Long-tailed Tits, a real ‘aaaah bird’. This afternoon in the Rapina area, the fields produce a pair of hunting Hen Harriers, a Red Fox and a flock of about fifty Golden Plovers together with 95 White-fronts and about 230 Tundra Bean Geese, amongst which we find a couple of Taiga Beans with longer and more extensively orange bills.

Today we check out of the ‘distillery’ and return to the forest with a view to finding Hazel Grouse, but first we come across a mixed feeding frenzy of Siskins and Coal, Willow and Crested Tits all busy collecting and caching Spruce seeds from wide open cones. A passing Sparrowhawk sends all the Siskins sky high and there must be at least a hundred in the melee! By 9am, the target is in our sights, as we find a Hazel Grouse on the track ahead of the vehicle. As we watch this diminutive but smartly patterned member of the grouse family, a second bird appears from the grass verge. This is the female without the black throat of her partner, and while he melts into the grass, she crosses the track in full view. This is such a lucky sighting in such a big forest. Wherever we go there are plenty of Jays, but two of them turn out to be Nutcrackers!

After another gourmet lunch, a short visit to Ilmatsalu fishponds produces a distant Goshawk floating above the tree tops, and another White-tailed Eagle, this time amidst a cloud of Lapwings. From here we drive west to Pärnu on the Gulf of Riga and end the day with another exquisite meal, this time in the Rannahotell, overlooking the beach with black-backed Baltic race Lesser Black backs offshore.

South of Pärnu, at Kabli, not far from the Latvian border is a bird ringing station with a massive Heligoland trap as well as mist nets catching ‘bucket loads’ of Great and Long-tailed Tits, the odd Blue and Willow Tit, and Goldcrests weighing a mere 5 grams! While we ‘help out’ with the ringing process from capture to release, a couple of White-tailed Eagles patrolling up and down the shoreline emphasise just how commonplace these awesome birds are here in Estonia. Exploring the nearby coastline we find several more eagles on various rocks as well as in flight, plus thousands of Wigeon, plenty of Great White Egrets and another mixed flock of White-fronted and Tundra and Taiga Bean Geese, this time joined by some Barnacles and a single Greylag! Other new birds include Bewick’s Swan, Smew, Grey Plover, a family of Grey Partridges and a Peregrine, while a Nutcracker posing on the top of a Spruce tree is a particular ‘crowd pleaser’.

It’s a one hour ferry ride across the Gulf of Riga to Kihnu Island, where we position ourselves on a viewing platform at Cape Pitkänä, the southernmost tip of the island. From this vantage point in the tree tops hundreds of passerines stream past at eye level including flocks of White Wagtails, Woodlarks, Blue, Great and Long-tailed Tits, Tree Sparrows and Siskins, accompanied by a spectacular procession of raptors with dozens and dozens of Sparrowhawks and Buzzards, plus Goshawk, Hen Harrier, Rough-legged Buzzard and the customary White-tailed Eagles. Along the shore we also spot Dunlin, Bar-tailed Godwit, Golden Plover and a Grey Plover in very smart breeding plumage. After a very productive morning, a local farm provides a home-cooked lunch with Pike-perch fresh from the brackish sea. After lunch, the northern tip of the island is swarming with Wigeon, Goldeneye and other ducks, while a dashing male Merlin also performs well here. Thousands of Scaup add excitement to the return ferry crossing and on the drive north to Haapsalu we add Great Grey Shrike to the growing tick list.

The Promenaadi Hotel overlooks a large lagoon with a pink tinge to the glass calm surface before dawn after a clear night sky. The grass verges have a light frost and low mist hangs in patches as we drive north to Põõsaspea, a small point that juts out into the Baltic Sea. Migration is in full flow and the ‘heavy traffic’ is clearly visible from the point with wave after wave of Barnacle and occasionally Brent Geese, accompanied by flocks of Velvet Scoters, Long-tailed Ducks and Red- and Black-throated Divers, some even passing directly overhead! Also present in smaller numbers are Eiders, Red-breasted Mergansers and Slavonian and Red-necked Grebes, along with White-tailed Eagles of course, occasional Sparrowhawks and another Hen Harrier. Meanwhile, the pine trees immediately inland from the point are alive with Willow and Crested Tits, Goldcrests, a couple of Lesser Spotted Woodpeckers and literally hundreds of Long-tailed Tits, calling busily and regularly lining up on the wires at least fifty at a time, before heading off along the coast! The whole scene is an amazing spectacle. The sunny calm afternoon at Saunja Laht lagoon is relatively quiet apart from an estimated 3000 yapping Barnacle Geese, thousands of Wigeon and Coots, 1350 Mute Swans and two Little Grebes! In the evening a pair of White-tailed Eagles causes mayhem amongst the thousands of wildfowl in Matsalu National Park, and we also enjoy a barbecue accompanied by home-made plum, blackcurrant and apple wines.

Returning to the national park we find more Bewick’s Swans along with thousands of Barnacle Geese. As the geese erupt from one particular meadow we notice a young Golden Eagle approaching, and as we track its gain in altitude it is joined by an adult White-tailed Eagle. We now have two species of eagle in the same view spiralling upwards together, which is yet another marvellous spectacle to see. Moving on we find a couple more Great Grey Shrikes, and then a male Black Woodpecker with a bright red crown shows so well we can see the whites of his eyes! Finally our search for more eagles is rewarded with a Lesser Spotted Eagle sitting on a post beside the track, which is a nice way to end a memorable trip to this lovely quiet corner of Europe. 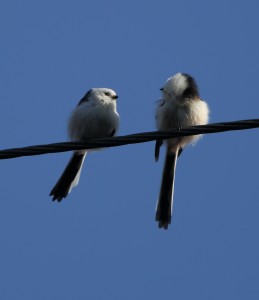