We begin at the Freiston Shore RSPB reserve, with plenty of Wigeon, and Little Grebes on the lagoon, as well as a couple of Little Egrets, a Ruff and a sinuous Pintail, while a scan across the saltmarsh to The Wash shoreline shows just how many birds are out there, including hundreds of Brent Geese and Curlews alongside Redshanks, a couple of busy Turnstones and a small group of Eiders resting on the foreshore, with a Marsh Harrier heading north, while a couple of elegant Greenshanks are a welcome sight on the way back to the vehicle for lunch. Over lunch, the grey sky and showers give way to a blue sky and warm sunshine, making a difficult choice of clothing for an afternoon walk around the Wetland Trail, where an early sighting is a ‘well trained’ Green Woodpecker, and later on a Roe Deer. With such calm weather precious few small birds appear to have ‘dropped in’, but just after commenting that there should at least be a Stonechat here, Jim spots one on a post, with Reed Bunting and Kestrel on the same fence line. Suddenly, the Stonechat is joined by a much scarcer Whinchat, showing right next to it in the same scope view! Just as suddenly heavy black clouds roll in from the south, delivered by an unexpectedly strong wind, blowing my tripod into a soft landing in a fresh cowpat! On the retreat back to the vehicle, we add Black-tailed Godwit, Snipe and Shoveler to the day list, making a respectable 53 species despite the apparent quietness! 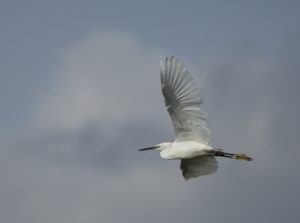 It’s tee shirt weather today for our scheduled ‘spin’ on The Wash from Boston, where the first sighting is a Sparrowhawk, circling overhead, while queuing on the quay for the Boston Belle! Steaming down the Witham, past Boston ‘Stump’, England’s tallest parish church, the next new bird is a Kingfisher and then a second one, followed by a Peregrine sitting on a warehouse ledge in the docks. By the time we cross the Greenwich Meridian, into the eastern hemisphere, we have already seen several waders, including Redshank, Black-tailed Godwit, Ruff, Greenshank, Ringed Plover and a single Bar-tailed Godwit. Approaching the Witham mouth, we see the only Wheatear of the cruise, along with Brent Geese, Shelduck and plenty more Black-tailed Godwits. Heading inland along the Welland, we add Turnstone and Grey Plover to the list, as well as the first of over 65 Common Seals hauled out on the mud. A sudden flurry of raptors ensues with a Marsh Harrier tussling firstly with one of four circling Buzzards, and then with a Peregrine which is forced to drop its prey into the river! Meanwhile, Kestrels hovering over the saltmarsh are joined by a very unexpected Red Kite appearing ‘out of the blue’, making a total of six raptors for the day! On the way back into Boston along the Witham, several Common Sandpipers show well, along with Dunlin, Grey Wagtail and two or three more Kingfishers dashing ahead of the boat, bringing the cruise list total to 53 species. Where else could one see the likes of Red Kite and Ruff from the same boat? Today we visit the nearby Frampton Marsh RSPB reserve, with two Water Rails from the Visitor Centre and a Weasel repeatedly scurrying around right outside the window before we have even started! The Weasel ‘performance’ was one of those ‘once in a lifetime’ experiences. Dodging the showers sweeping in on the tail end of Hurricane Humberto we begin in the 360 hide with a plethora of waders on the leeward side including Avocet, Black-tailed Godwit, Curlew Sandpiper, Dunlin, Greenshank, Knot, Little Stint, Ruff, Snipe, Turnstone and at least 175 Golden Plovers. As well as the ‘wader fest’, plenty of wildfowl include hundreds of Wigeon, plus Shoveler, Teal, Pintail, a single Gadwall and 10 Pink-footed Geese. After lunch in the hide, a clearing sky allows a circuit of the reserve along the sea wall, where we find Yellow Wagtails and a vagrant Pectoral Sandpiper, showing very well in the scope while feeding quietly at close range. By now we had seen 83 different birds in just three days, including 21 different waders! 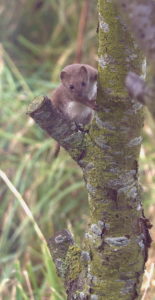