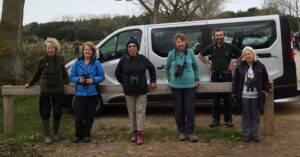 After so many months written off by the pandemic, it’s great to be back in ‘action’ again. Along the road heading east through the Cambridgeshire fens, a small group of Cranes flying south is a great start to our grand tour of East Anglia. First stop is at the Welney Wildfowl and Wetlands Trust reserve where newly arrived Whoopers are good to see, alongside loads of Black-tailed Godwits also from Iceland, one of which is still in its resplendent rusty red breeding plumage. A passing Marsh Harrier flushes a trio of Pintail amongst numerous Wigeon, and then a Sparrowhawk dashes past the front of the hide. Moving on, we find more Black-wits, feeding alongside Ruff and Snipe, followed by more Marsh Harriers and a dozen or so Golden Plovers, while three Cattle Egrets foraging among some cattle are an unexpected find. 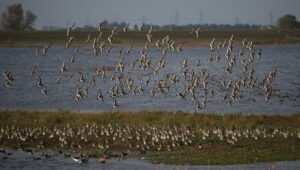 A recently arrived mega rare Rufous-tailed Scrub Robin from the Middle East at the nearby Stiffkey Marshes is an obvious starting point this morning, but once we arrive, the long faces show that there is no sign of the vagrant despite a patient search of the saltmarsh, so we make do with plenty of Skylarks, Brent Geese, Shelduck and Little Egrets, plus a couple of Red-breasted Mergansers, a Redwing, and a Rock Pipit alongside a slightly smaller and lighter Meadow Pipit. In accordance with Sod’s Law, the Scrub Robin reappears two hours after we leave! Further west along the coast at Holkham, we find two Egyptian Geese and three Barnacles amongst thousands of vociferous grazing Pink-feet. A Great White Egret here completes our ‘egret collection’, while a couple of Red Kites float lazily by. We hear Crossbills and Yellow-browed Warbler in the pines and find the vagrant Eastern Stonechat from Central Asia! It looks very peachy compared to ‘our’ more rufous Stonechats. Further west at Holme Dunes, there is no sign of the recent Red-flanked Bluetail, so we head for the nearby Titchwell Marshes RSPB reserve, where the Teal and Avocets look stunning in the afternoon light. Scrutiny of all the resting gulls reveals a Caspian, while a scan of the beach produces Oystercatcher, Turnstone, Sanderling and Bar-tailed Godwit. By early evening thousands of Starlings are gathering in a ‘super flock’ as several Marsh Harriers also gather to roost in the reed beds, where we spot a Water Rail and a superb male Bearded Tit sitting pretty in the reeds! By the end of a great day we had seen 65 species. 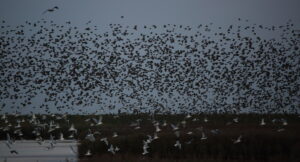 In view of the awful weather forecast we make a late start this morning and arrive at a very soggy Strumpshaw Fen, where a skulking but vocal Cetti’s Warbler makes a brief appearance. From the Fen Hide we all eventually enjoy really close views of a pair of Bearded Tits, barely five yards away, although the stress of getting everyone to see them leaves me with a need to lie down in a darkened room to recover from PTSD! Further round the Fen Trail circuit we enjoy great views of three busy but obliging Goldcrests and listen to a duet from nearby Water Rails as a small flock of Fieldfare flies over. During lunch back at the reserve entrance a feeder attracts five different tits including plenty of Blues, along with Great, Coal, Marsh and Long-tailed, while a noisy flock of Siskins feeds in an adjacent birch. Just down the road is the Buckenham Marshes RSPB reserve where we find a Sparrowhawk feeding on its hapless prey, a flock of Snipe, at least a dozen white-fanged Chinese Water Deer and five different geese, including Greylags, Canadas, about twenty White-fronts from Arctic Russia, three Barnacle Geese and a Hawaiian Goose (Nene)! Eleven new birds on such a dismally grey day is not too bad.
What a difference a day makes, with blue sky and sunshine this morning and throughout the day. Early sightings at the famous Minsmere RSPB reserve include a lingering Hobby, southbound Swallow and House Martin and a recently arrived Redwing. Meanwhile, the normally shallow Scrape is more like a brim full lake, which is great for all the ducks but the only waders present are a single Dunlin and Common Sandpiper and a couple of Curlews. Heading through the dunes alongside the shingle beach, we enjoy a picnic lunch in the sunshine while watching a pair of Stonechats and a pair of Dartford Warblers, all showing really well atop the brambles. We scope a group of Red Deer, while the last of the eight new birds today is a surprise Black Swan amongst hundreds of Greylags and Great Black Backs on a wetland near the Sizewell power station where the Black Redstart is a no show. 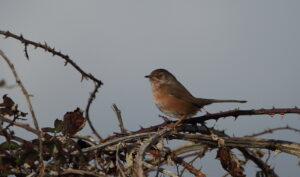 Heading west, a visit to the Lackford Lakes reserve produces scope views of Kingfisher and Snipe, which are trumped by an unusually showy Cetti’s Warbler and a posing Woodlark singing beautifully from the top of a birch tree at nearby Cavenham Heath, bringing the bird list for the trip to a nice round 100 species! Thanks to everyone for making it such an enjoyable trip.