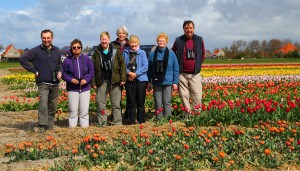 On the way to Hull a productive visit to the North Cave Wetlands gave us fifty-five species, including brilliant views of three Mediterranean Gulls and one Little Gull, amongst hundreds and hundreds of their noisy Black-headed cousins! After a very smooth overnight crossing, we arrived in sunny Rotterdam and headed due east for Barendrecht, hoping to connect with a reported drake Bufflehead, all the way from North America! The Dutch system of reporting rare sightings is so accurate that by 9.35am we found this smart little duck, exactly where it was supposed to be, and so close we could see its lovely purple-green ‘petrol head’ without needing a scope! Heading north for Den Helder, through a vivid patchwork of multi-coloured bulbfields, our arrival at Balgzand on the Wadden Sea coast produced Barnacle and Egyptian Geese, Spotted Redshank, Buzzard, Marsh Harrier and super scope views of a Peregrine sitting on a post. What a great start.

It was a bright and breezy 8°C first thing as we headed north from Den Burg, the ‘capital’ of Texel. First stop was a lookout point over the De Slufter reserve, where brilliant light allowed fantastic scope views of the many displaying Eiders, a flock of three dozen well patterned Ruff, a couple of Spoonbills, a very rusty Black-tailed Godwit, a drake Pintail, a Grey Plover and a Sanderling. Further north, at the beach beyond De Cocksdorp, the rising tide pushed numerous Redshanks, Sanderlings and a Spotted Redshank in charcoal breeding plumage towards us, while a flock of around two hundred black-bellied Golden Plovers circled above and a female Hen Harrier floated by. It was after noon by the time we reached the lighthouse at the northernmost tip of the island, where a damp field was peppered with grazing Brent Geese and resting Common, Herring and Lesser Black-backed Gulls. As well as the resident Linnets and Stonechats, we spotted a couple of migrant male Wheatears and a very smart blue-headed Yellow Wagtail. Strolling through the adjacent scrub, an unfamiliar song alerted us to the presence of a Bluethroat, which promptly sat on top of a bush while singing his heart out! What a magnificent show in the scope, as he sang to us with his puffed up deep blue throat, with a small white central patch; a ‘lifer’ for some, and definitely a star performance for all. 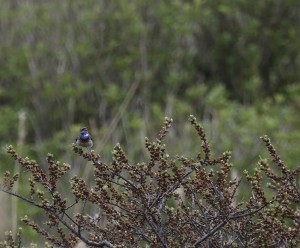 After lunch in quaint little De Cocksdorp, a visit to the east coast at Zeeburg Farm, produced even more Brent Geese in the surrounding fields, and Eiders along the shore, as well as hundreds of Bar-tailed Godwits in a range of plumages, from the familiar bleached winter pattern, through to their rich rusty breeding colours. Amongst all these birds, we also found a few Dunlin and Turnstone, several Whimbrel and Avocets, and one Knot! The adjacent saltmarsh is home to dozens of Spoonbills, with lovely yellow throats and breeding crests at this time of year and we finished the afternoon at Utopia, an aptly named newly created wetland, which has been colonized by a massive colony of deafening Black-headed Gulls and Sandwich Terns, while our visit coincided with a ‘fall’ of dozens of lively Yellow Wagtails.

We began today in the De Muy reserve, home to a pair of Marsh Harriers, numerous gorgeously pink-flushed Linnets and several Black-tailed Godwits displaying noisily overhead. We scoped another Bluethroat, while several Nightingales singing in the dense bushes alongside the trail were almost impossible to pinpoint, and so we moved on to a Grasshopper Warbler, singing from the top of a bush as obligingly as yesterday’s Bluethroat! Further on we enjoyed scope views of a pair of Kestrels, watching us from their nestbox home, plus very close views of a couple more blue-headed Yellow Wagtails. Just before the end of the walk, we finally pinpointed a Nightingale, singing from slightly less dense bushes. It was now time for a late lunch at the Ecomare Museum, with an exhibition of the island’s natural history. This afternoon, a field of tulips planted in a neat spectrum of colours made a nice backdrop for a group photo, where the nearby Mok bay was full of the usual wildfowl and waders, with the addition of Greenshank for the trip list.

It was very breezy again this morning, with a fresh northwest wind, making the 7°C temperature feel even colder! From a hide looking across the Dijkmanshuizen reserve we had brilliant views of several more Spotted Redshanks, numerous Ruff showing signs of their black, white or ginger ruffs, and around a thousand Barnacle Geese, including a leucistic individual with a sharply frosted back, but then a hail storm forced us to close the flaps and savour the cosy shelter of the hide until the blue sky returned. Following the east coast road north, Brent Geese grazed the meadows in their hundreds at remarkably close range, and we added Little Ringed Plover to our list, but failed to turn a very light phase Buzzard into a Rough-legged one, while it soared right above us. Further on, the Waagejot lagoon was alive with hundreds of noisy Sandwich Terns, but this was nothing compared to the three thousand or so at the Utopia wetland, where we tried but failed to find a Mediterranean Gull amongst all the bedlam. By now, we were barely glancing at the ‘common place’ Spoonbills, elegantly sifting the water at close range with their uniquely shaped bills! Out on the adjacent Wadden Sea, distant smoke-like wisps rising up from the horizon were actually huge flocks of indeterminate waders, numbering in the thousands! After a battering from the wind we decided to take shelter in the De Dennen forest, where a tranquil stroll through the blossoming trees, alive with singing Chiffchaffs and Blackcaps, added Robin, Song Thrush, Blue Tit and Great Spotted Woodpecker to the trip list, while also enjoying a profusion of Bluebells, rich yellow Marsh Marigolds and two perfect Snakeshead Fritillaries, one white and one a deep purple. 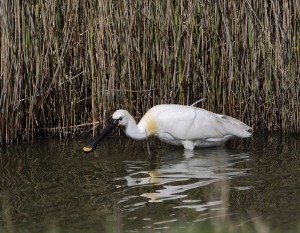 With news of a vagrant Red-rumped Swallow reported before breakfast, near De Cocksdorp, we made a bee line for the site straight after breakfast, and once again the rare bird news came up trumps, as we spotted the swallow, hawking with Barn Swallows, almost exactly where it had been reported at 7.17am and again at 8.27am (somebody must be keen). Job done, we returned south to our planned walk around the Hors Polder reserve, alive with Marsh Harriers and singing Willow and Sedge Warblers, and we also found Common and Lesser Whitethroats here, as well as yet another posing Bluethroat! The Bluethroats were the bird of the trip, while other highlights included Marsh and Hen Harriers, elegant Spoonbills, super smart blue-headed Yellow Wagtails, Bufflehead, Little Gull, Red-rumped Swallow, loads of waders and geese, and the singing Nightingale and Grasshopper Warbler. This just left time for a final photo-shoot of the beautiful bulbfields near Den Hoorn before leaving terrific Texel on the ferry back to Den Helder. 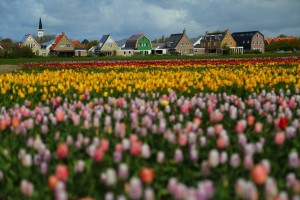