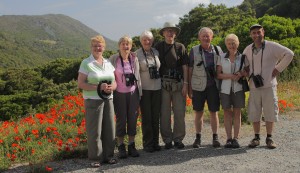 Our first bird is a Hooded Crow at the airport, followed by numerous Red Kites and Jays on a very scenic drive south towards Corte, with snow still on the mountain tops although the thermometer reads 27˚C! A stroll through the woods near Piedigriggio brings us face to face with a feisty little Firecrest, and driving on through a spectacular landscape, we find low flying Crag Martins and posing Spotted Flycatchers, which we soon realize are very common here. After a long day we arrive at the Hotel Dominique Colonna in the beautiful Restonica Valley, with Dipper and Grey Wagtail on the cascading river behind the hotel.

Today the thermometer reads a mere 10˚C with low cloud and drizzle, so we head south hoping for better weather, but the magnificent views across to the Pasciolo fort are shrouded in mist and we can’t even see the fort! The walk here is pointless so we continue south to the shelter of the Café du Gare at Vizzavona, and then follow the trail through lovely woods decorated with deep pink Cyclamen flowers, to the Cascade des Anglais. Along the trail we see Great Spotted Woodpecker, and more Firecrests, along with Coal and Great Tits, while a flock of about 30 Crossbills “jip-jip” overhead. Three large Corsican Fire Salamanders, all at least 6 inches long and apparently splattered with English mustard, are out on the trail as if they know that the day is going to be a damp squib. Sure enough the drizzle turns to serious rain on the return leg and so we ‘throw in the towel’ and head back to the hotel for an ‘early bath’.

Despite a promising forecast it is still murky and damp first thing, but we press on hoping for the weather to clear. By now we are on to plan D, thanks to the weather, and so drop down via the D143 to the Pont de Noceta, a lovely spot with Sardinian and Subalpine Warblers, Cirl Bunting, a couple of Red-footed Falcons and a Dipper posing on a rock in midstream. There is also a visible northward migration of numerous Swifts and Crag Martins and a single Honey Buzzard. Further up the winding ‘scenic drive’, the dramatic vistas are shrouded by low cloud until we reach the tiny village of Muracciole, where we pull over to admire the view and the handsome Italian Sparrows. As the village church strikes 11am we scope a Cuckoo calling from a dead branch right on the edge of the village, close enough to see the yellow feet and eyes, and with a bulging throat each time it calls. Suddenly it ducks down as a Red Kite floats over before being moved on by a Hooded Crow. By 11.30 we are back at the fort, which is still hidden by cloud, but at least it is now dry, so we set off with a picnic. Gradually the mist clears, the fort becomes visible and a Marmora’s Warbler emerges from the flower-covered bushes to perch on a bare twig just ten yards in front of us! Equally obliging is a female Rock Thrush, showing its vermiculated patterning really well from various tree tops and rocks, while quivering its rufous tail as if it were a giant Redstart. Next close encounter, often within the same view as the thrush, is a Woodlark, which also gives a rendition of its delightful song. By the time we sit down for a picnic next to the fort, the sun has come out and the view is spectacular, especially with hundreds of Swifts and a few larger Alpine Swifts screaming by at eye level. On the descent a smart male Stonechat, three Ravens and a migrating Marsh Harrier also get in on the act.  I am now itching to find the Corsican Nuthatch and so we make the short but steep drive up to the Col de Sorba, and when the GPS reaches 1105m, I pull over below a likely looking stand of towering old pines. There are the customary Chaffinches, Coal Tits and Spotted Flies, and eventually we hear the distinctive whistling call of a nuthatch, first in the distance up above but then closer and just down the road, and so we scurry along the road to home in on the sound. Yes, there it is first in one pine and then flying across to a nearer pine where it sits on a dead snag giving us all enough time for  a good long look in the scopes, before moving to the tree ‘next door’ for some feeding action; result! We round off a productive day at an awesome viewpoint at the end of the narrow winding D723, where we scope a Blue Rock Thrush perched on a distant pinnacle as well as a possible world record for most distantly spotted Spotted Flycatcher, literally half a mile away!

At last the sky is clear and ideal for a walk through the amazing scenery of the Restonica valley. Sadly the original car park is now a 90 minute hike up the valley, due to a landslide, which has removed a bridge and part of the road, and so we don’t get as high as hoped. Scanning the ridges we pick out a group of Alpine Choughs mobbing a Buzzard, but there is no sign of a Lammergeier. We rest at the café at the end of the old road, where Corsican Finches are ‘car park birds’. They look very smart with bright yellow faces, foreheads and breasts, grey caps and napes, rusty backs and greenish wing bars; definitely a star bird.

It’s time to check out of the fabulous Hotel Dominique Colonna and head north, with the aim of combining the highlights from a two day schedule, after losing much of day one due to the poor weather earlier in the week. Winding our way west via the sheer sided Santa Regina gorge, we find another Blue Rock Thrush, en route to the Col de Vergio, hoping to rendezvous with a Golden Eagle, but it isn’t around, so we make do with the stunning scenery, more Corsican Finches and a three foot trail of furry caterpillars! On the way back down from the col, a right turn onto the D218 brings a flurry of activity, starting with a Hoopoe, doing a circumnavigation of us before alighting in a tree top and puffing out its throat as it calls. Meanwhile several Serins are singing from the tops of dead branches, which are full of nest holes being used by Italian Sparrows and Spotless Starlings, and we also spot our first Woodchat Shrike. This looks like a good place for a picnic and we are soon joined by a Woodlark serenading us from a nearby wire and a very friendly free range pig, which eagerly scoffs up the scraps. A little further on we find a Red-backed Shrike before continuing north and into the awesome Asco Valley, by which time I have run out of superlatives to describe the mountainous scenery. At the end of the road at Haut Asco, there is still no sign of Golden Eagle or Lammergeier, but four Crossbills in the scope, perched in the top of a small pine are a very nice consolation.

It’s a nice sunny day as we head north on yet another scenic drive, this time along the coast road from Bastia to Cap Corse, where our first sighting is a Hobby perched on a wire right in front of the vehicle! The remote and unspoilt Maquis here offers good views of Subalpine, Sardinian and Marmora’s Warblers, plus Tawny Pipit, another Blue Rock Thrush and a large exotic black and orange butterfly called a Two Tailed Pasha. At the end of the walk, we scope a rocky stack, supporting an enormous nest of sticks piled at least six feet high! Two fully grown Osprey ‘chicks’ are sitting on top and occasionally exercising by flapping their wings. Amazingly, one of the birds makes its maiden flight onto a nearby rock, just as we are watching! What lucky timing. This afternoon, a walk to the Tour d’Agnello adds Yellow Wagtail and Peregrine to the list, along with Shag and Yellow-legged Gull on the gorgeous clear bright blue sea. Just short of the tower on a picturesque headland, with the island of Capraia on the horizon, a scan out to sea produces a white-fronted brown bird sitting on the sea, along with another and then a third. As we speculate on the likelihood of them being shearwaters, a stream of definite Yelkouan Shearwaters, looking like brown ‘Manxies’, passes through the view by the dozen. Suddenly there is a frenzy of activity with a few Shags, dozens of the shearwaters and loads of Yellow-legged Gulls all piling in to a small area to cash in on a hapless shoal of small fish. As we watch the action unfold, not too far out from the headland, a few paler yellow-billed Cory’s Shearwaters, with a larger slower flapping jizz join the throng, and then the large dorsal fins and grey backs of two or three Bottlenose Dolphins break the surface amongst all the birds! “Wowee”, there are both types of shearwater as well as the dolphins all in the same scope view! What a fabulous spectacle, and yet who would have thought it, as just a few minutes earlier there were virtually no signs of life out there!

Today we explore the area around the Etang de Biguglia, a huge reed-fringed brackish lagoon, patrolled by Red Kites and Marsh Harriers. We begin at the southern end, where beautiful Bee-eaters are lined up along the roadside wires giving excellent scope views against a snow-capped mountain backdrop. Further north we find singing Corn Bunting, Zitting Cisticola and Reed and Cetti’s Warblers, with Red-crested Pochards on the lagoon. After lunch on the beach, followed by a paddle, the nature trail alongside the lagoon brings us into close range of a Hoopoe, probing the ground with its long curved beak right in front of us on the track. Several well hidden Nightingales serenade us along the trail with their delightful songs and eventually we pinpoint one of these magnificent songsters full on in the scope and watch his powerful performance for several minutes. We can see every feather detail, his lovely big brown eyes and every breath he takes between explosive bursts of song, and when he points his yellow gape towards the scope we can virtually see his tonsils! One couldn’t wish for a better view for such a prolonged period. Merci La Corse, à bientôt. 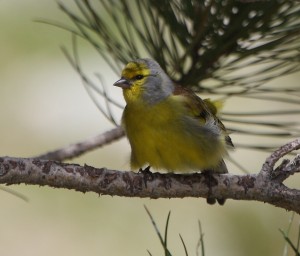