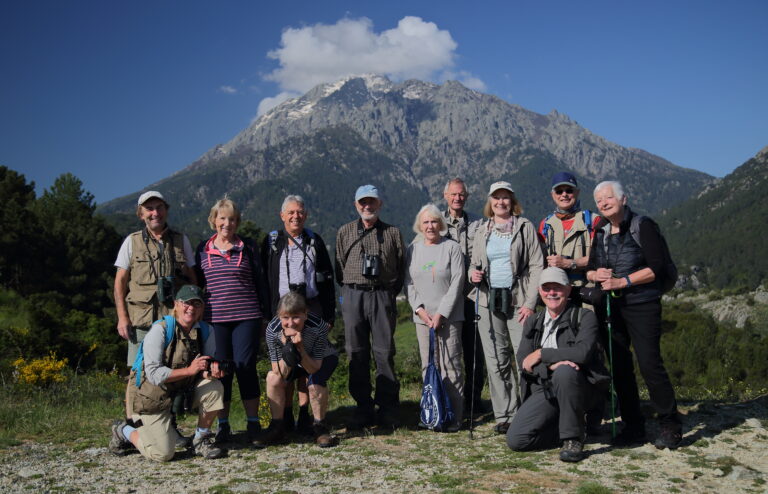 So here we are at last, in Corsica, two years later than originally planned thanks to that damned virus! Driving up the Restonica Valley on a narrow snaking road, with towering peaks on all sides and thickly wooded vertiginous drops down to a gin clear fast flowing river, home to Dippers and Grey Wagtails, it’s easy to see why the French call this “L’Ȋsle de Beauté”. Along the road, we pull over at a likely looking spot amid the old Corsican Pines, with impressive columnar trunks, hoping to find the rare Corsican Nuthatch but our first sighting is a feisty Firecrest with the fieriest imaginable bright orange punk-style coiffure. Within minutes we hear the repetitive trill of our target nuthatch and soon we have a pair showing really well for over half an hour! Other sightings here include lovely deep pink Cyclamens and blue-spotted Tyrrhenian Wall Lizards. 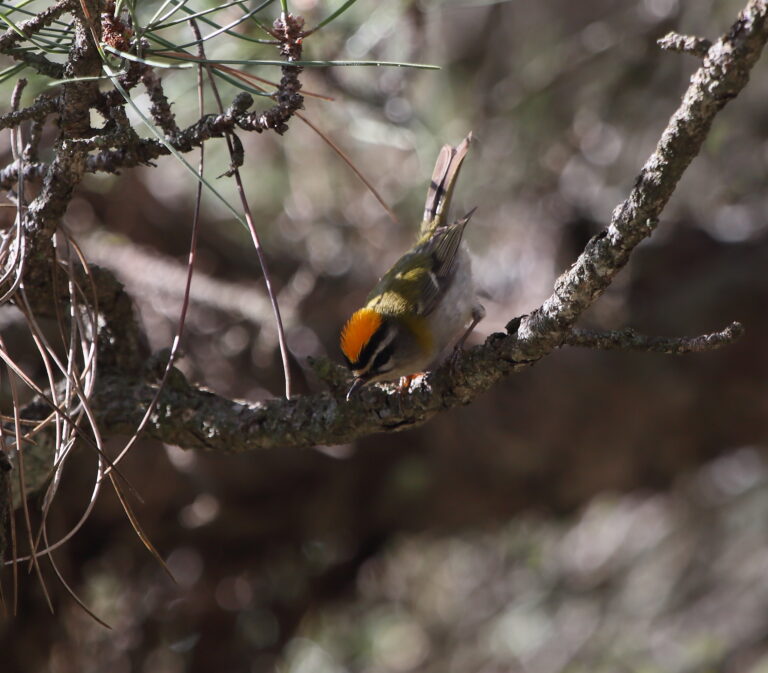 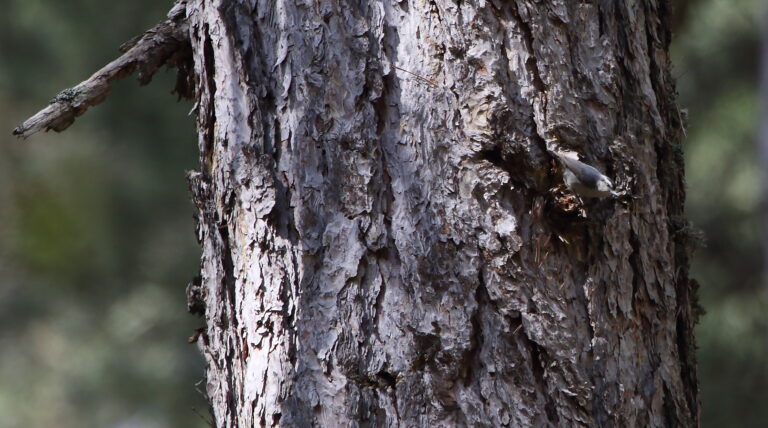 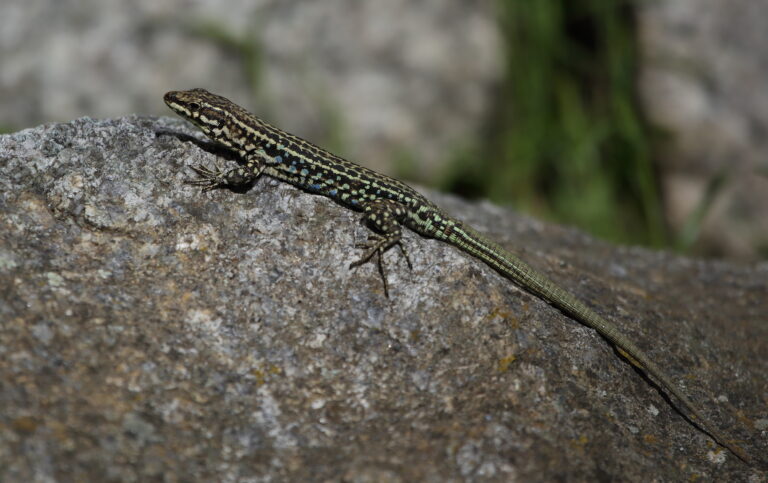 At the end of the road, while sitting outside a rustic café enjoying a morning coffee in the sunshine, Mike spots the Corsican Finch, and there they are, in a group of half a dozen feeding on the short turf beside the old farmstead. That’s both the Corsican endemics before noon on our first full day in the field! 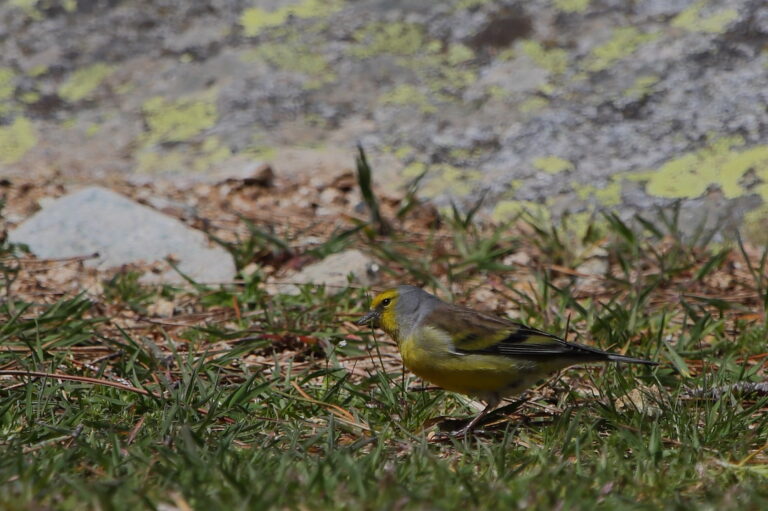 Heading up the track to Lac de Melu, with violet wild crocuses along the way, the scenery is literally breathtaking, with snow patches on the higher slopes, where we spot the odd Raven and plenty of Alpine Choughs, and after a picnic lunch amid the peaks, a Water Pipit at quite close range in fine breeding plumage, with a delicate salmon pink flush to the breast, is a nice find. 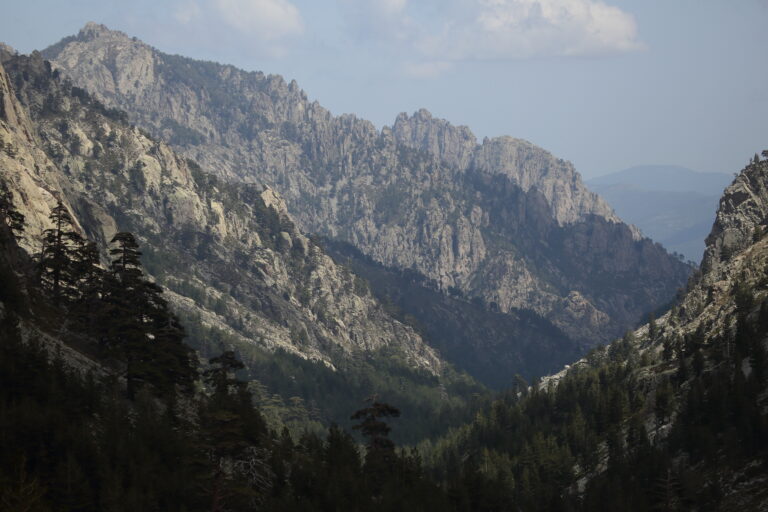 There’s a glorious blue sky this morning for our drive south to the ruined skeleton of the eighteenth century Pasciola Fort, perched on a crag amid spectacular scenery in every direction. Along the track through an aromatic garden of wild flowers including Pink Butterfly Orchid, French Lavender and a profusion of Rock Roses and Aspodels, attracting butterflies like Green Hairstreak and Scarce Swallowtail, we spot the scarce Moltoni’s Warbler sitting in full view in a small dead tree, followed by equally clear views of posing Red-backed Shrike and Cirl Bunting and a very obliging Marmora’s Warbler, which like Moltoni’s, has a very restricted range within this part of the Mediterranean. On the way back from the fort a Woodlark singing on a nearby rock is another nice sighting. 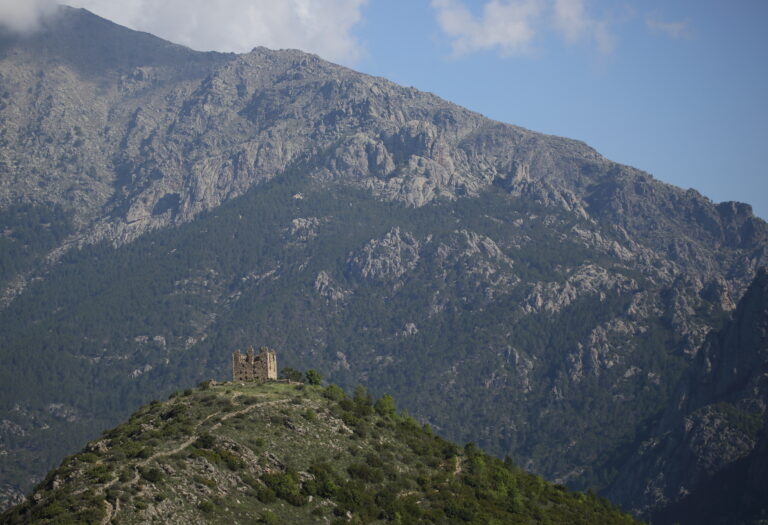 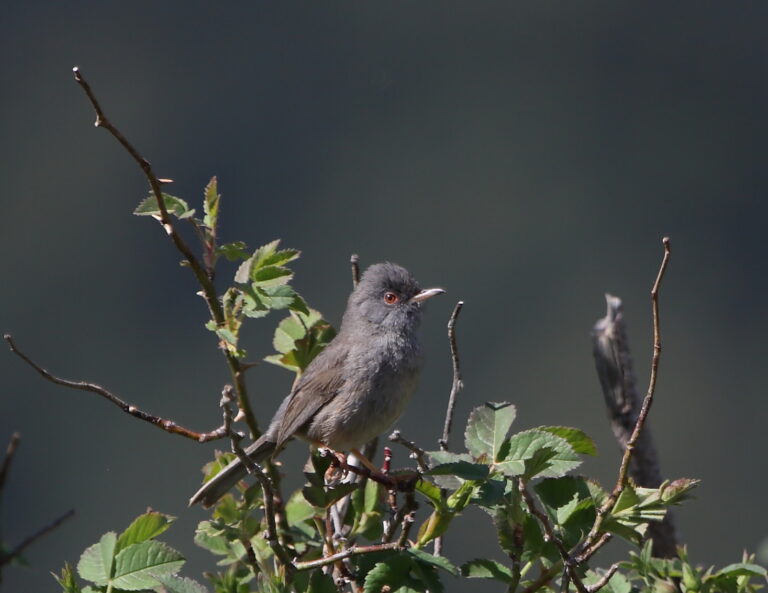 After a picnic lunch in the sunshine we head up a winding road to the top of the Col de Sorba at 4300 feet above sea level and within minutes of alighting from the vehicles we find a pair of Corsican Nuthatches repeatedly visiting a nest hole in the trunk of a long dead Corsican Pine. What were the chances of such a find? 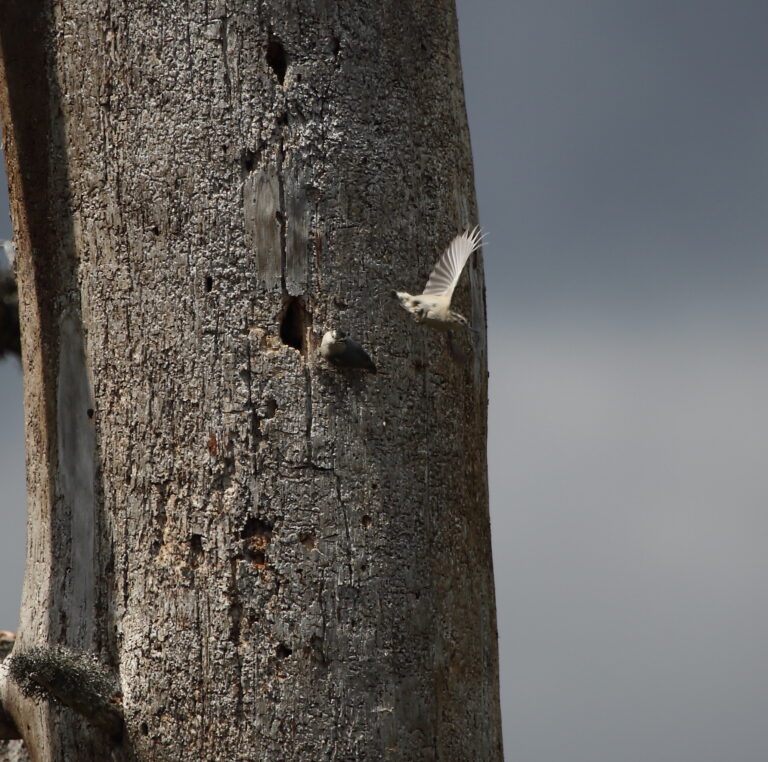 Following afternoon tea in a nearby café, we ‘enjoy’ a white knuckle ride along the narrow winding D723 with a sheer drop on one side down to the river, many hundreds of feet below. At the end of the road, the view is once again unbelievably spectacular, with extensive walls of rock disappearing into the clouds, which abruptly bring the sightseeing to a close with a sudden downpour. Back in Corte the weather has cleared and the air is full of House Martins and Swifts above the roof tops.
It’s another beautiful sunny day as we head north into the Santa Regina Gorge, yet another spectacular setting, where a stroll down to the river through the tranquil pines produces another Dipper. Heading deeper into the narrow gorge, a couple of stops produce glimpses of Blue Rock Thrush for a few and scope views of a Spotted Flycatcher for all. We arrive in Calacuchia, with streets lined by deep pink blossom trees, in time for elevenses in a café, surrounded by chirping Italian Sparrows, looking like a cross between House and Spanish Sparrows. Red Kites float effortlessly over the village, being mobbed by Hooded Crows, while a Kestrel feasts on a wall lizard on one of the terracotta rooves. Continuing west, we enter an area of old gnarled Sweet Chestnut trees, offering ideal nest sites for birds like Wryneck, so we pull over and search for this secretive member of the woodpecker family. Within minutes, we have two calling away and showing really well on bare branches projecting like antlers from one of the old chestnut trees!
After a picnic amid a tranquil forest of tall pines we find ‘our’ Treecreeper and then continue up to the Col de Vergio at 4812 feet above sea level. From here a stroll up the hill leads to a 360 degree view of more amazing scenery, along with views of Corsican Finches, singing Woodlarks and a very handsome male Northern Wheatear.
The sky is as blue as ever again this morning, with the usual Blackbirds and Jays visiting the terrace over breakfast. After paying our bills (hoorah!) we check out and head north into the magnificent scenery of the Asco Valley. At the first stop a stroll through gnarled old Holly Oaks produces more Firecrests and a purring Turtle Dove, while Saint Pancras Lily is another nice botanical find. Higher up the valley, we stake out a ridge of rocky pinnacles and as well as several Alpine Choughs and the odd Raven we also spot a gliding Goshawk and the unmistakable spread eagle shape of a Golden Eagle (well spotted Mike) soaring majestically at around 8000 feet above sea level! At the end of the road, the scenery is as dramatic as ever, with lines of peaks on both sides of the valley, including snow capped Monte Cinto (the highest peak on this rugged island at 8878 feet) at the head of the valley. Sadly, the rare Bearded Vulture still eludes us but we do see impressive Alpine Swifts zooming back and forth against the rocky slopes. 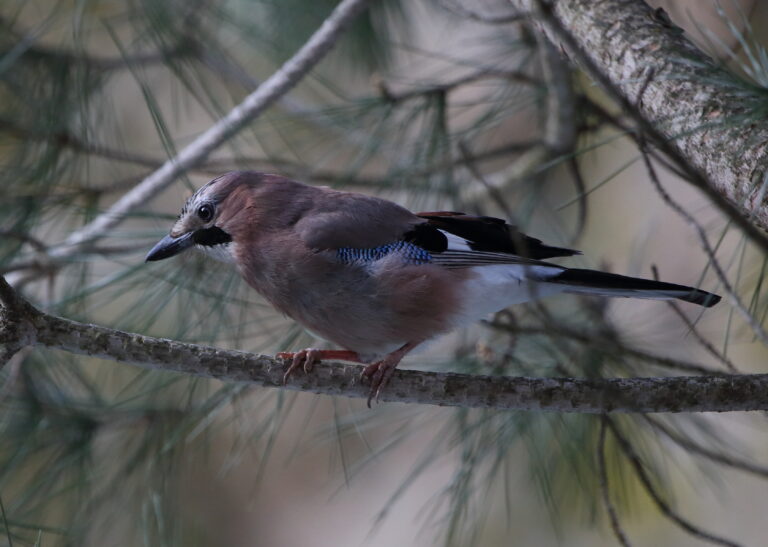 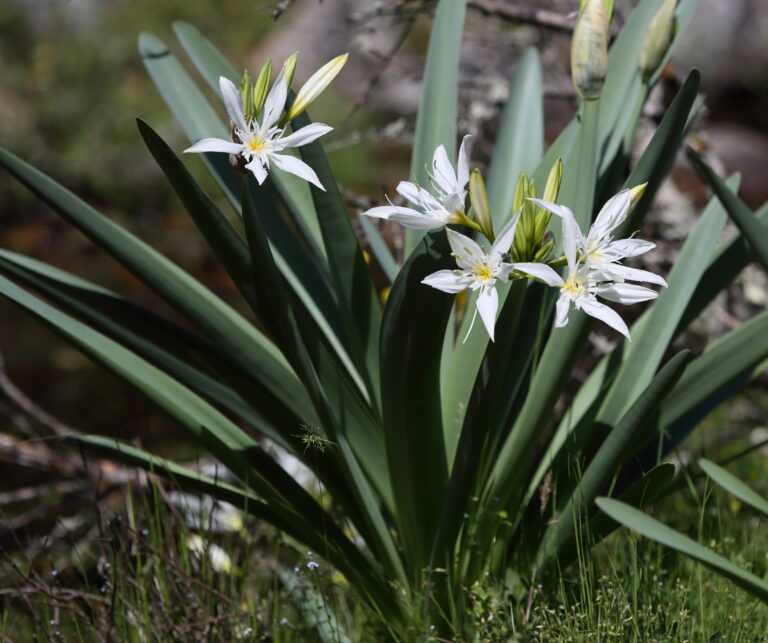 Le soleil brille encore aujourd’hui, as we set off north for Cap Corse, the most northerly point of the island. Stopping off at a seafront café in Macinagio, we watch several Cory’s Shearwaters sail by while sipping coffee in the sun. Moving on to the north coast near Tollare, the beautiful coastal scenery and a deep blue azure sea are worth writing home about. Besides a profusion of wild flowers, we spot two occupied Osprey nests on rocky headlands, one of which is a giant haystack over six feet tall! Other sightings here include Peregrine, a Marmora’s Warbler singing just fifteen yards away, and an equally close posing Tawny Pipit. After a picnic lunch on rocks looking out to sea, we walk a two kilometre stretch of the Sentiers des Douaniers from Barcaggio along a beach to the Tour d’Agnello, where we spot Yellow Wagtail, a group of high flying Bee-eaters en route north and hear a singing but shy Blue Rock Thrush. 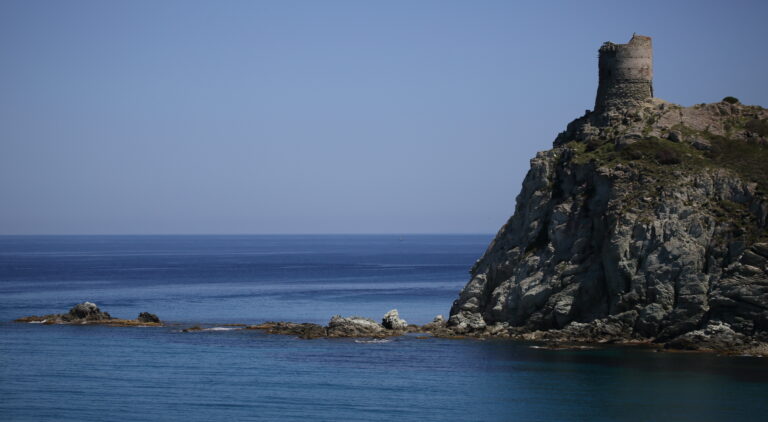 Someone had the bright idea of a pre-breakfast sortie into the hotel grounds at 6am this morning! Outside, we soon hear and see hissing Spotted Flycatchers, followed by fabulous views of Woodchat Shrike, Spotless Starling, a singing Serin and a colourful pair of Golden Orioles, plus four Marsh Harriers and a handful of Turtle Doves, all heading purposefully north, and so by the end of the stake out we had recorded twenty different bird species before breakfast! During breakfast on the terrace, a ‘jipping’ Crossbill passing overhead is a further, and unexpected, addition to our World Birding Day list. Not far from the hotel, a stroll through meadows beside the large freshwater Etang de Biguglia soon produces more new birds for the trip like Zitting Cisticola, Red-crested Pochard and a bevy of singing Nightingales, plus a lovely scope view of a Turtle Dove and then a raptor fest with Red Kite, Marsh Harrier, Osprey, Kestrel, Hobby, Honey Buzzard, and a Sparrowhawk carrying prey all in the same air space! Alongside the lagoon proper, serenaded by even more Nightingales, more new birds include Little Ringed Plover, Black-winged Stilt, Oystercatcher, Greenshank, a single Greater Flamingo and a couple of Audouin’s Gulls, while Clouded Yellow and Speckled Wood are new butterflies for the trip.
After lunch back at the hotel, our last sortie produces close views of Cetti’s Warbler, followed by a Cattle Egret and thunbergi and flava races of Yellow Wagtail around the same group of cattle, along with great views of colourful Bee-eaters, a humungous locust and a Grass Snake swimming across a ditch lined by lovely pink Flowering Rush.
By now we had seen fifty eight different bird species today, but after dinner, with a full moon rising, we had one more mission to accomplish; spotting the diminutive Scops Owl which had been calling from 9pm onwards throughout the previous two nights. Bang on time, we hear the ‘song’ again and after a few more minutes we see this little owl fly above us and eventually land on a branch with its eyes shining bright in my torchlight. What a grand finale to a super week in this most beautiful of islands. À bientôt La Corse.