A few days before our departure, I emailed Pavel, our guide, to ask about the weather. His reply was not very encouraging; “After the very mild January (up to 20 C) now it is a real winter time with – 16 C, strong winds, frost and drifts. For the moment most of the geese moved south because everything is frozen here”. However we need not have worried as you will see from the following report;

Not far from the hotel in Sarafovo, virtually our first birds were a group of roadside Eastern race ‘white-collared’ Jackdaws, and by 9am at our first stop by a huge lake near Burgas, Pavel found us several Slender-billed Gulls, with a long line of Whooper Swans further out, while a couple of ‘ring tail’ Hen Harriers floated by. The next lakeside stop produced the first of many Marsh Harriers and Pygmy Cormorants, and among hundreds of Pochards we found a handful of smart White-headed Ducks and a Black-necked Grebe, with a pair of Crested Larks and some Bramblings feeding on the road. Moving on to another vantage point over another huge lake, we found the first of many ‘redhead’ Smew, followed by a single rather scruffy White Pelican and then a huge Pallas’s Gull in full breeding plumage flew by. At yet another lake, we had close views of Great White Egrets and then found a couple of Dalmatian Pelicans with vivid red bill pouches, rounding off a very productive first morning in the ‘field’. From here we headed south to the Strandja Nature Park near the border with Turkey. Our target bird in these apparently lifeless wooded hills with a light dusting of fresh snow was the scarce White-backed Woodpecker. We soon found a large party of Fieldfares and Redwings feasting on ivy berries and then Nuthatch and Short-toed Treecreeper. I spotted a White-back but it quickly disappeared and then we heard a second bird chattering in the tree tops, but as soon as we eventually pinpointed it, it also fled. After a break for lunch we strolled back along the same short stretch of road, becoming aware of a faint tapping sound somewhere among the trees not too far in. Eventually we pinpointed the source of the sound. It was a female White-backed Woodpecker and we spent at least twenty minutes watching in our bins and in the scope while it pecked away at a dead tree trunk, barely 100 yards from the road, allowing a fabulous view, and so our patience was well rewarded. On the return journey, we added more quality birds to our list including Peregrine, Red-crested Pochard, Little and Caspian Gulls and White-tailed Eagle!

Today was mainly a travelling day with some birding along the way, starting with a visit to Pomorie Lake which was covered in water birds. Among the thousands of Coot, Gadwall, Shoveller, Wigeon, Shelduck and Mute Swans we found several Red-breasted Mergansers and Smew, including our first ‘white nun’, as well as four White-fronted Geese, an Avocet and a Ruddy Shelduck. Around the lake there were plenty of Bramblings and Skylarks and we also spotted Corn Bunting, Water Pipit, Penduline Tit and even flushed a Woodcock! By mid morning we were on the main road heading north, with three ‘Tit stops’ on the lookout for Sombre Tit. The first ‘Tit stop’ produced only Great Tit, plus Middle Spotted Woodpecker and close views of a lovely Red Squirrel with a dark almost grey coat and long ear tufts. The second stop was lifeless as all the twigs were coated in a thick layer of ice, but the third stop was very productive. A family of Whoopers with five cygnets grazed a green meadow, with male and female Hen Harriers on patrol, while a pair of Grey-headed Woodpeckers called from inside the adjacent wood. It didn’t take too long to whistle up one of the ‘peckers’ which emerged from the wood and flew straight towards us before landing in the tree right in front of us for a great view in the scope. With no red on the forehead this was clearly the female and she posed for several minutes while calling from her perch. This just left our target bird to find and eventually we found a Sombre Tit in a crab apple tree. It was so intent on feeding that we were able to watch it in the scope at close range while it sat still on a branch, giving magnificent views of its sepia tones. With a pale wing panel it looked like an oversized Willow Tit, and a little further along the same track we found a second bird which also showed exceedingly well. Continuing our journey north, sightings included Goshawk, a covey of about twenty Grey Partridge, lots of Calandra Larks and a feeding flock of about a thousand White-fronted Geese, with a melanistic individual and a dozen or so Red-breasted Geese amongst them. Just before 6pm with the day light almost gone we pulled over and got out to watch and listen as thousands and thousands of geese in v-shaped skeins flew overhead in wave after wave after wave on their way to roost, making a spectacular end to another good day.

Straight after breakfast, thousands of Red-breasted and White-fronted Geese piled into a field across the road from the lodge and spent the whole day grazing there. Meanwhile we headed a short way north and by a sign reading Romania 3Km, we found another field with a similar number of yet more geese! From here we did a circuit of the mainly frozen Durankulak lake. As well as the usual crowd of Marsh Harriers and Common Buzzards, we found Tree Sparrows, and then a Bittern broke cover and flew low across the reeds before dropping in out of sight. Further on we had good views of a Rough-legged Buzzard, showing its black-banded white tail as it flew by at close range. The flat calm sea was peppered with Black-necked Grebes, Goldeneye, Red-breasted Mergansers and Smew, and as we headed inland past a flock of Rooks we watched a White-tailed Eagle carrying a ‘take away’ (possibly a Rook) for its lunch. Next we found a Great Grey Shrike, hunting from a roadside wire and then spotted a Long-legged Buzzard, making all three buzzard species seen in one morning! After a nice bowl of soup for lunch back at the lodge, we returned to the first ‘goose field’ and slowly walked across the field towards them. It was like advancing on the massed ranks of an army lined up across the opposite side of a battle field. As well as great views of the geese, thanks to the winter sun on our backs, we also enjoyed watching a pair of Hen Harriers hunting between us and the geese. We then retreated and left the army of geese in peace, and Pavel took us to a nearby ramshackle village with an abandoned school now used as a communal roost by Long-eared Owls. We soon found three birds in a tree right outside the school entrance, with probably at least a dozen more scattered around the playground. Returning to the frozen lake, which matched the cool grey of a passing male Hen Harrier, we arrived in time to watch several Marsh and Hen Harriers coming in to roost amongst the reeds and were lucky enough to see our second Bittern of the day fly low across the tops of the reeds. Soon after sunset, thousands of White-fronted and Red-breasted Geese flew overhead in ever shifting waves, creating a cacophony of sound as they dropped onto the frozen surface of the lake to roost.

This morning we headed a short way south toward Shabla lake. On the way Pavel promised us a Hawfinch and by mid morning we had cracking views of one in the scope, dwarfing its Greenfinch neighbours. Next we found a single Bewick’s Swan with a flock of about 1600 White-fronts and then at a shabby campsite, we scoped male and female Syrian Woodpeckers as well as a Lesser-spotted Woodpecker hanging on thin twigs above one of the Syrians. After a picnic lunch, we spent some time watching a ‘ringtail’ Hen Harrier and a Rough-legged Buzzard, hunting near the road. The buzzard provided a nice photo-opportunity against the blue sky. After a cup of afternoon tea on the sea front in the sunshine, we arrived at Cape Kaliakra, jutting out into an incredibly calm sea, where we found rafts of Great-crested Grebes, and Shags with smart crests, and amongst them were a Black-throated Diver and a juvenile Eider, which is a mega-rarity in the Black Sea. We also spotted a Black Redstart on the headland and then moved on to a nearby gorge where Pavel promised Eagle Owl at 6pm! We had not waited long when the owl appeared from nowhere and flew a short way along the gorge to land on top of a rock on the opposite rim. We trained our scopes on the magnificent bird and as it was only 5.45 the light was still good enough to see the rich amber colour of its eyes as well as its erect ear tufts. After a minute or two it flew back along the gorge, followed by its mate. This was our bird of the day, even trumping the posing Hawfinch!

It was sunny all day today with perfect light for watching a Water Rail which ventured out of the reeds close enough for us to see its red eyes twinkling in the sunshine, though we were not so lucky with Moustached Warbler. Merlin was a new bird for the list and then at Shabla Lake we found all five grebes, with Black-necked and Slavonian within three feet of each other, allowing a ‘fieldguide comparison’ of their differing head and bill profiles. In the afternoon we also had good views of a hovering Rough-legged Buzzard and then a Long-legged Buzzard perched in a bush. Returning to Durankulak, we found ‘our geese’ spread across an enormous green field busy grazing, and although we scanned the ‘flock’ back and forth several times we could not find a single Lesser Whitefront. However there must have been 15-20,000 Red-breasts and White-fronts, stretching for almost half a mile from one end of the mass to the other! At times they were so densely packed that they blotted out the grass completely! I don’t remember ever seeing so many birds in my scope in one field of view, and when they took off en masse it was like an enormous murmuration of Starlings with a deafening wall of sound! As Pavel said, it was a pity there were not more people there to see such a fantastic show.

On the last day we had a leisurely trip south to the airport at Varna and during a stop for afternoon tea, we sat back and spotted a single Waxwing posing in the top of a tree, so we left the table and did a runner back to the car for the scope. What a fabulous finale for our bird list. 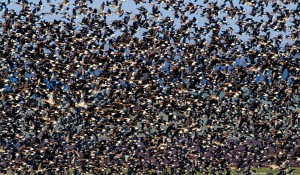