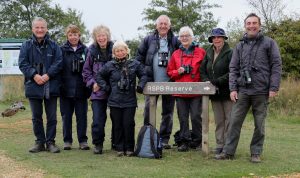 A Peregrine perched on a gargoyle high up on Boston ‘Stump’, England’s tallest parish church, across the river from our hotel, is a good start to the day. Once aboard the Boston Belle, for a birdwatching cruise along the River Witham and out into The Wash, we spot Grey Wagtail and Common Sandpiper, before crossing the Greenwich Meridian eastwards on the way down the Witham. A Whimbrel and the first of several Marsh Harriers are next on the list, followed by a female Eider where the river mouth opens into The Wash. The late morning high tide pushes thousands of Oystercatchers into dense black roosting masses alongside pale grey ‘carpets’ of Knot, which explode into tight whirling flocks, like Starling murmurations, as the boat passes by. Steaming along the River Welland, fifty-two Common Seals haul out on the mud banks, and three Greenshanks fly across the river. Back in the open expanse of The Wash, Gannets plunge dive into the blue horizon, and on the way back to Boston, Greylag and Barnacle Geese bring the cruise tally to forty-eight species seen. Where else could you see Stock Dove and Gannet from the same boat?

The Peregrine is a ‘car park bird’ at The White Hart Hotel in Boston, where a pair of these dashing falcons, adorn the gargoyles high up on the tower of the ‘Stump’ first thing this morning. Across the border in Norfolk, at the Snettisham RSPB nature reserve, Red-legged Partridge is new for the trip, along with Robin, Dunnock, a pair of Stonechats and a wheeling flock of Golden Plovers. Meanwhile, the moonscape of mudflats is awash with a variety of waders in their thousands, regularly exploding into smoke-like murmurations, and from the hides overlooking the lagoons, we enjoy close views of Greenshanks, Grey and Ringed Plovers, and Black-tailed Godwits busy preening and resting. On the way back to the car park, a Pink-foot named Billy is a lone star amongst all the Greylag and Egyptian Geese. Moving on to nearby Sandringham, for tea at ‘the Queen’s’, the vociferous Firecrest is reluctant to offer an audience.

‘Our’ Peregrine is still in situ first thing this morning as we vacate The White Hart for a visit to Gibraltar Point, where the lagoons are the quietest I have ever seen them. According to the sightings board, we should have been here on Monday 1st October, when sightings included Water Rail, Spoonbill and Spotted Crake, but today we make do with nice scope views of Avocet, Snipe and Spotted Redshank, and the first Redwings of the Autumn, while a Hobby saves the day with ‘best ever’ views as it repeatedly whizzes close by at low level. Along the shore this afternoon, there are more Gannets, as well as Sandwich Terns and a Red-throated Diver still in breeding plumage, bringing the trip tally to 86 species seen.