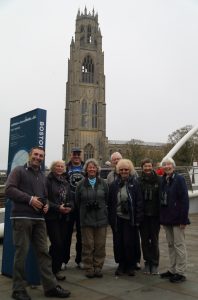 Two Peregrines flying around the top of Boston ‘Stump’, England’s tallest parish church, across the river from our hotel, are the first birds on our list, as we arrive this afternoon. After this flying start, a visit to the nearby Freiston Shore RSPB reserve, adds hundreds of Wigeon, a dozen or so Brent Geese, a flock of nine Little Grebes, and a couple of Whooper Swans, while Storm Callum barrels across the saltmarshes, keeping the Little Egrets well hunkered down.

Today we visit the nearby Frampton Marsh RSPB reserve, which is jam-packed with thousands of tightly grouped Black-tailed Godwits, as well as hundreds of Wigeon and Pintail, which are readily sent into a skyward flurry by the local Peregrine, while a Weasel bounding along, and then across the path ahead of us, adds to the excitement. Meanwhile, Callum’s warm wind is still blowing madly, making an exhilarating sideways walk along the breezy causeway to Witham Mouth, where a recently sighted Great Grey Shrike has gone with the wind by the time we arrive. From the very tip of the causeway, we spot Ringed Plovers, Turnstones, five Pink-footed Geese and three Eider Ducks, just as the Wash begins to ebb away. On the return walk, flocks of Wigeon and buffeted Brent Geese pass over against the increasingly blue sky. Over lunch in the East Hide, we watch a bouncy flock of up to 500 Linnets and Goldfinches, as well as many Meadow Pipits and Skylarks, with a single Wheatear clinging to short stems to avoid being blown away. There is no sign of the long-staying Long-billed Dowitcher from the sea wall, but we do get nice views of elegant Spotted Redshanks amongst all the Wigeon. Back at the Visitor Centre, we enjoy a well-earned cuppa, while watching a Scaup diving repeatedly amongst all the dabblers. Following reports of a Red-necked Phalarope, we finish up at the Reedbed Hide, and eventually pinpoint the delicate looking Phalarope, paddling furiously into the wind, with a bonus Little Stint sometimes in the same view.

A wet start and a grim forecast delay our departure for Gibraltar Point, where the Visitor Centre provides welcome shelter from the relentless rain, along with the hides overlooking the lagoons, which are unusually quiet apart from Redshanks, a single Snipe, a bedraggled Hare and thirty one Whooper Swans, which provide a spectacular fly by, brightening up an otherwise dull day.

Another dreary wet day is a wash out for birding, so we make do with a visit to Sandringham House, the Christmas retreat of Her Majesty the Queen, where new birds seen from the car park include Buzzard, Mistle Thrush, Long-tailed and Coal Tits, Goldcrest, Chaffinch and Siskin, with Jays in the woods.

Hooray! It has stopped raining, just in time for our ‘spin’ on The Wash, aboard the Boston Belle, where the first sighting is a Kingfisher on a post, before we have even started moving! Steaming down the Witham, the next new bird is Grey Wagtail, followed by Common Sandpiper, and by the time we cross the Greenwich Meridian, into the eastern hemisphere, we have already seen twenty five species, including loads of Black-tailed Godwits and a few Ruff, followed by a single Bar-tailed Godwit, a couple of late Swallows and a Greenshank, bringing the total to thirty species so far. Approaching the Witham mouth, we see the first of many Common Seals, along with Brent Geese and Common and Sandwich Terns. Heading inland along the Welland, we add Grey and Golden Plovers, a Short-eared Owl on a post, and both Hen and Marsh Harriers. Back in the wide open expanse of The Wash, there is a flock of about twenty five Common Scoters, and just as I am looking out on my knees, as if praying for Gannets, three juveniles fly regally by, followed by four Skylarks! What an odd combination. Returning along the Witham, we get plenty more good views of Redshanks, Curlews, Black-tailed Godwits and Ruff, as well as Mistle Thrush, Green Woodpecker and Yellowhammer, and, once back in Boston, a pair of Peregrines land noisily on the top of the ‘stump’, bringing the cruise total to fifty six species. Where else could one see the likes of Green Woodpecker and Gannet from the same boat?